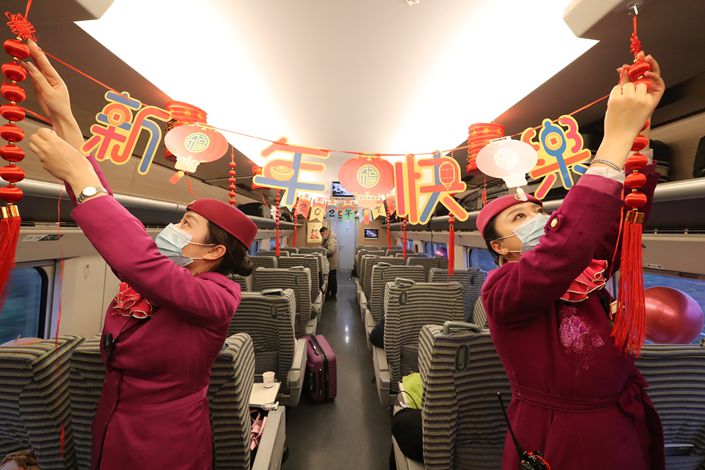 China’s services sector expanded at the slowest pace in three months in December as growth in total new business and new export orders both softened, a Caixin-sponsored survey showed Wednesday.

The Caixin China General Services Business Activity Index, which gives an independent snapshot of operating conditions in the sector, fell to 56.3 in December from 57.8 the previous month. A number above 50 indicates an expansion in activity, while a figure below that points to a contraction.

The index, better known as the Caixin China services PMI, has been in expansionary territory for eight straight months. Although the December reading was not as high as those recorded in the previous two months, the figure was still among the highest over the past decade, showing that services activity across China further recovered from the Covid-19 outbreak, the survey said.

The gauge for total new business dropped to the lowest point in three months in December, though it remained in expansionary territory. New export orders rose at a slower pace than in November amid weakening foreign demand. Surveyed service enterprises said the recent resurgence of Covid-19 cases in key export markets continued to limit the growth of their overseas businesses.

Service providers’ input costs rose in December, though at a lower rate than in November — when they increased at the fastest pace since August 2010.

Burdened by rising costs, these companies increased the prices they charged customers at the fastest pace since January 2008.

The employment measure remained in positive territory for the fifth straight month as the job market improved, though the rate of expansion in December slowed from November’s more-than-10-year high. As a result, service companies’ backlogs of work further declined last month.

Service companies were confident about their business outlook for this year, with the gauge for future output expectations reaching the highest since April 2011. “A majority of surveyed service providers were confident that the epidemic was under control and the economy was recovering,” said Wang Zhe, senior economist at Caixin Insight Group.

Economists from Nomura International (Hong Kong) Ltd. predicted that China’s manufacturing PMIs — the official and Caixin PMIs — will remain buoyant in the coming months, while its services PMIs may slip from a high base.

China’s official services PMI, released on Thursday, fell to 54.8 (link in Chinese) in December from 55.7 the previous month.

“We believe China’s growth recovery remains on track and expect Beijing to normalize its policy stance in 2021, although the normalization should be moderate and gradual,” the Nomura economists said in a Tuesday note.

However, they warned that the risk of further Covid-19 spreading in China will increase in early 2021 with the approach of the Lunar New Year holiday as migrant workers start heading home later this month. If there’s a resurgence of cases, the government will likely strengthen some social distancing requirements, which could constrain the pace of the domestic recovery despite continued policy support, the economists said.