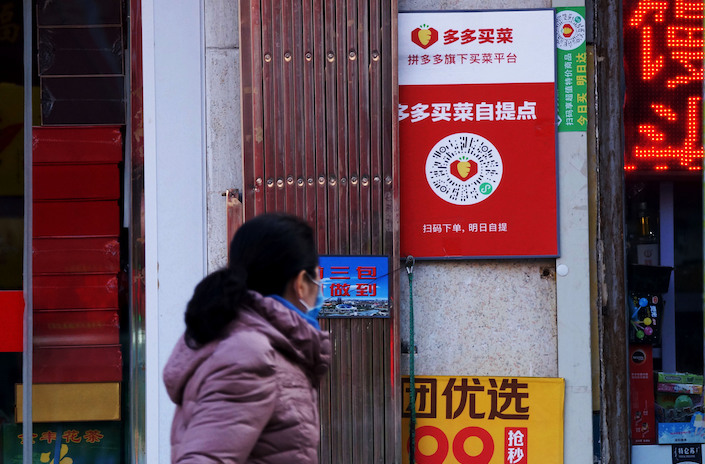 Community group buying is the latest e-commerce trend in China and has exploded since last year.

China’s white-hot group grocery-buying market is getting even busier despite toughening regulatory scrutiny as discount e-commerce specialist Pinduoduo Inc. made a new foray into Shanghai.

Pinduoduo added services to customers in Shanghai on its newly launched group grocery-buying platform Duo Duo Maicai. Initiated in August, the services are available to Pinduoduo users in 25 provinces.

Community group buying is the latest e-commerce trend in China and has exploded since last year. Shoppers can place orders for fresh food and groceries via e-commerce platforms, which then pool and coordinate the orders to generate bulk purchases with big discounts.

At the same time, fierce competition has drawn the attention of regulators, who are concerned that big tech companies are using heavy subsidies to offer below-cost prices and squeeze traditional retailers. Antitrust regulators in December summoned and issued a list of group-buying business restrictions to several internet companies, including Alibaba, Tencent, JD.com, Meituan, Pinduoduo and Didi.

Pinduoduo’s grocery business push is further surrounded by controversy after the deaths of two employees. The first occurred in the early hours of Dec. 29 when a 22-year-old female working for the company’s grocery business in Western China’s Xinjiang Uyghur Autonomous Region collapsed in the street and later died. Over the weekend, a Pinduoduo employee committed suicide in Changsha. The incidents sparked public criticism of a highly pressured work culture at Pinduoduo and other internet companies.

E-commerce giants are counting on the new business to reach hundreds of millions of new users, which would become the source of new growth, said one e-commerce business executive.

Internet giants have invested billions of yuan in the group grocery-buying businesses in the past six months, a private equity investor in the retail industry told Caixin.

Pinduoduo is counting heavily on group grocery buying. Colin Huang, company founder and CEO, in August said the new business is promising but tough, requiring long-term commitments. Huang called for employees to get involved in a “hard battle” to develop the new business.

Since testing the service in central cities Nanchang and Wuhan in August, Pinduoduo quickly expanded the business into more than 100 cities in 25 provinces. Several Pinduoduo employees said the company reassigned a large number of employees to support the new business.

Unlike most rivals, which mainly focus on group grocery buying in smaller cities, Pinduoduo has been aggressively expanding in large cities like Shanghai.

Timmy Shen and Anniek Bao contributed to this report.