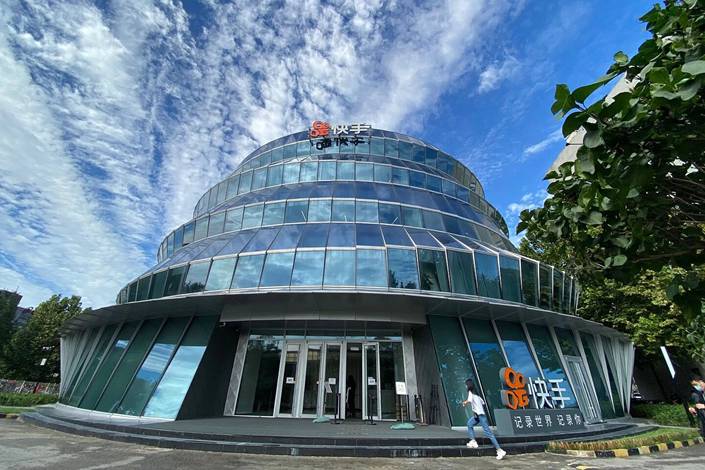 Kuaishou, the world’s No. 2 short-video app operator behind ByteDance, plans to list its shares in Hong Kong early next month, people close to the deal told Caixin, beating its competitor to market in a deal expected to raise around $5 billion.

The company counted 262 million daily active users (DAU) during the three quarters ended September last year, making Kuaishou roughly half the size of its rival’s Douyin, the sister app of TikTok for internet users in China, which boasted it had some 600 million daily users last August.

Kuaishou Technology Co. Ltd., whose Chinese name means “fast hand,” was approved to list following a hearing with the Hong Kong Stock Exchange, according to a filing on Friday.

The hearing came more than two months after the company submitted its initial public offering application. The company, whose largest shareholder is tech giant Tencent Holdings, plans to debut its shares roughly three weeks from now, on Feb. 5, according to people close to the deal. The deal would raise up to $5 billion, giving it a valuation between $40 billion to $50 billion.

The forthcoming IPO makes Kuaishou the first short-video platform to enter the public market. “It will be an important litmus test to see the extent investors appreciate the short video phenomenon, and sets the scene for Bilibili’s secondary listing in Hong Kong, as well as a potential Douyin IPO,” Michael Norris, a Shanghai-based analyst at consultancy AgencyChina told Caixin.

Nasdaq-listed Chinese video streaming firm Bilibili Inc. has confidentially filed for a secondary listing in Hong Kong earlier this month, according to a news report last week from CNBC.

At the height of China’s nationwide Covid-19 lockdown, Kuaishou saw its DAU balloon 47% during the first six months of last year to nearly 260 million users from 175.6 million in 2019, as people cooped up at home turned to online entertainment. Daily usage levels are nearly five times higher than in 2017, before the spectacular rise of ByteDance’s Douyin made the short video format a global phenomenon.

Kuaishou was founded in 2011 as a means for Chinese users to share animated GIFs with their friends, moved into the short-video format a year later. The company has posted explosive revenue and user growth over the last three years, capitalizing on the spectacular rise of Douyin, which was only created in 2016, then launched internationally as TikTok in 2017.

The company saw its revenue in the first three quarters last year jump nearly 50% to 40.7 billion yuan ($6.3 billion), according to the Hong Kong market filing.

But booming revenue did not translate into profit as it posted a big jump in net losses to 97.4 billion yuan during the first three quarters of 2020, significantly wider than the modest 1.6 billion yuan loss it posted in the first three quarters in 2019. The company attributed the greater losses to stepped-up marketing to expand its user base, enhance its brand recognition and to develop its ecosystem of partners.

“Recent trends in the market have rewarded growth companies, making the sometimes dangerous assumption that these companies will become profitable at some point in the future upon reaching scale,” a tech analyst at a mid-sized fund manager told Caixin following Kuaishou’s IPO filing late last year. “Livestreaming and online entertainment have been enjoying strong popularity during Covid, which I think investors will be focusing on, trying to determine if it is a growth spurt or representative of a possibly longer-term trend.”

While Kuaishou’s revenue is on track to rise sharply again this year after reaching 40.7 billion yuan during the first three quarters of 2020, exceeding the 39.1 billion yuan it reported for the entire year of 2019, that growth rate has continued to slow in recent years.

The bulk of its revenue comes from taking a cut of payments viewers make to buy virtual gifts for livestreamers they watch. This revenue stream accounted for more than 25 billion yuan in the three quarters ended last September, representing a 10.4% increase from the year before.

Kuaishou, has also evolved into an e-commerce marketplace where vendors advertise their merchants through livestreaming sales events, reported gross merchant volume (GMV) from transactions on its platform grew to in excess of 204.06 billion yuan during the three-quarter period, more than 12 times its volume in 2019.

But the company has seen the proportion of revenue earned from non-retailing livestreams shrink from 91.7% three years ago to 62.2% at the end of the third quarter of last year.

Proceeds from the upcoming floatation will be used to build out the company’s ecosystem, including improving the quality and diversity of contents, developing new features on the platform, expanding online marketing solutions as well as bettering it as an e-commerce marketplace “to help merchants manage their businesses,” it said in the Hong Kong filing.

The remainder will be earmarked for research and development of technologies, such as development of artificial intelligence-led algorithms and big data computational capabilities, as well as spending on acquisitions and investments.

The deal is being underwritten by Morgan Stanley, Bank of America and China Renaissance Holdings. The two cofounders — Su Hua, who serves as company CEO, and Cheng Yixiao, leader of core products’ research and development — hold 12.65% and 10.02% share of the company, respectively. Tencent Holdings Ltd. also owns 21.57% shares as Kuaishou’s biggest institutional shareholder.