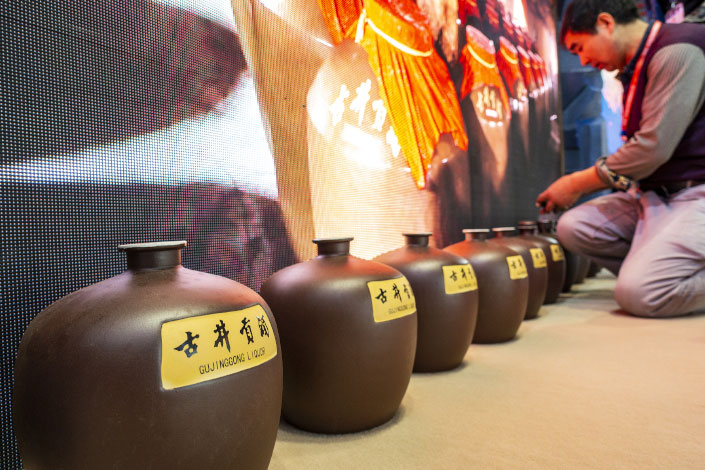 A collection of jars labelled Gujing Gong Wine sit on display at a wine expo in Shanghai in November 2018.

In what is fast becoming a trend for China’s cash-strapped provinces, another maker of the national Chinese spirit known as baijiu is helping to fill up depleted local government coffers.

The latest move came in East China’s Anhui province, home to the Gujing brand of liquor in the city of Bozhou. Late Friday, Anhui Gujing Distillery Co. Ltd. said that 6% of its state-owned parent’s shares held by a government-owned financial company would be transferred to Anhui province’s finance department free of charge.

That holding is ultimately earmarked to bolster the province’s social security fund that is the main source for payment of local pensions in the province. The transfer will see the local social security fund ultimately receive about 3.23% of Gujing’s Shenzhen-listed shares, which were worth about 3.2 billion yuan ($493 million), based on the company’s latest stock price.

Companies like Gujing wear many hats for their local government owners, including a role as major tax contributors to their local economies, said baijiu analyst Cai Xuefei. They also act as a sort of regional brand ambassador, and are important pillars of the local financial system. Given such important and varied roles, such share transfers should be seen as a regular form of activity, he said.

“To put it simply, the liquor companies have money and many local governments lack such funds,” he said, explaining the rational for such transfers. More broadly, the shuffling of funds back and forth between state-owned companies and their government owners is relatively common practice throughout China, a relic of its socialist past.

Gujing’s transfer makes it the third such baijiu-maker to prop up its local government’s finances in the past month.

In December, Hebei Hengshui Laobaigan Liquor Co. Ltd. announced a similar transfer of 10% of the shares of its parent, Laobaigan Group, to the finance department of its home province of Hebei.

And around the same time, industry giant Kweichow Moutai Co. Ltd., the world’s most valuable liquor-maker, announced its own state-owned parent would transfer 4% of its holdings in the company to the government in its home province of Guizhou, where they would also ultimately end up in the provincial finance department. That marked the second such transfer of the company’s shares, following a similar move at the end of 2019. The most recent share transfer netted the local government stock with a market value of 92.5 billion yuan.

Moutai’s transfer came amid rising market concerns over Guizhou’s financial health as the province’s state-owned enterprises face mounting debt repayment pressure. At an August meeting, local government officials guaranteed that they would take measures to ensure that bonds issued by local companies will be repaid on time.

While the Moutai transfer was more broadly aimed at shoring up its home government’s finances, many other recent transfers have been specifically aimed at bolstering local social security funds, which are often insufficiently capitalized to handle a growing number of pensions for China’s aging population. Such share transfers are part of a plan to bolster social security funds first mapped out by the State Council in 2017.

Shares of centrally-administered state-owned enterprises are also being used to bolster China’s national social security fund, which mainly acts as a reserve to make up for shortfalls in other pension funds.

By the end of last year, China had transferred around 1.68 trillion yuan worth of shares in 93 central government-administered state-owned enterprises to the national social security fund, the Ministry of Finance said in a statement last week.