By Matthew Walsh and Xiao Hui 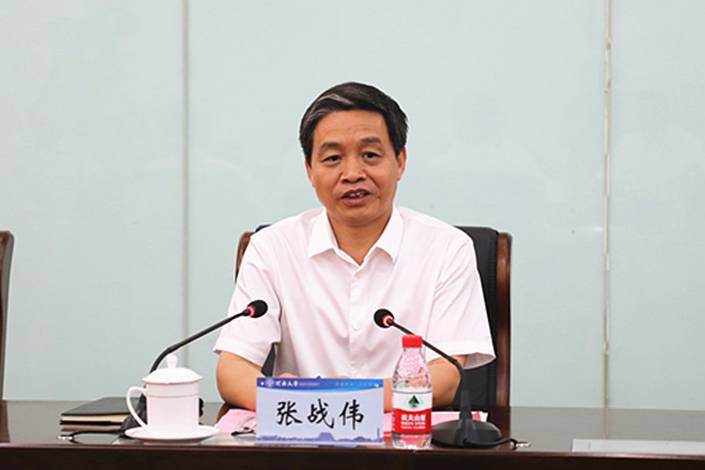 A high-ranking official in central China has been fired after reportedly slapping a subordinate during an argument over whether the other man was allowed in the cafeteria — an episode that has triggered a public outcry over the conduct of government leaders.

Zhang Zhanwei (张战伟) was removed Thursday from his post as party secretary of Jiyuan, a city of 700,000 people in Henan province, according to a statement (link in Chinese) by the Central Commission for Discipline Inspection (CCDI), the party’s internal enforcer.

If proven true, Zhang’s act “would be entirely out of keeping with the image that a leading cadre should uphold,” the CCDI said in a separate article (link in Chinese) on Thursday. “It would not only lack basic human respect for those below him … but also reflect an abuse of official authority and a propensity for bullying, neither of which can be tolerated.”

China’s Communist Party has waged a sweeping campaign against official malfeasance since President Xi Jinping took office in 2013. At a CCDI meeting last year, Xi urged inspectors (link in Chinese) to “resolutely punish corrupt and incorrect methods” as well as “root out negative elements that impact the party’s progressiveness and purity.”

On Saturday, the wife of Zhai Weidong, the general secretary of the Jiyuan government, wrote in a post on Weibo, a popular Chinese social media platform, that Zhang had “viciously” given Zhai a “resounding slap” during an argument.

The post was widely reported by domestic media and drew widespread condemnation online. On Monday, authorities in Henan said they had launched an investigation into the incident.

According to the post, which has since been deleted, Zhang confronted Zhai during breakfast at a municipal government cafeteria on Nov. 11, challenging him over his “credentials” for eating there and ordering a waiter to “kick this man out for me.”

Zhai, thinking Zhang had not recognized him, tried to explain his presence, only for Zhang to slap him in the face, the post said, adding that Zhai “saw stars, heard ringing in his ears, felt his face burning and stood in a daze. His whole brain was in a state of shock.”

It added that the attack humiliated Zhai, who was subsequently hospitalized for a potential heart problem until Dec. 20. His wife, Shang Juan, claimed she reported the incident to police on Nov. 15 but never heard anything back.

Members of the Jiyuan party committee told the Beijing News that Shang’s account left out certain details of the incident, including a lengthier verbal altercation between Zhang and Zhai prior to the slap.

In an interview with the Beijing News, Zhai said he was receiving medical treatment, but did not confirm any details of the post, saying only that he had asked Shang to delete it. He added that it was inconvenient to respond to questions while the investigation was ongoing.

Contacted by Caixin on Tuesday, the head of Jiyuan’s publicity department said provincial authorities were investigating the matter and would inform the public once the probe was completed.