By Anniek Bao and Yang Xue 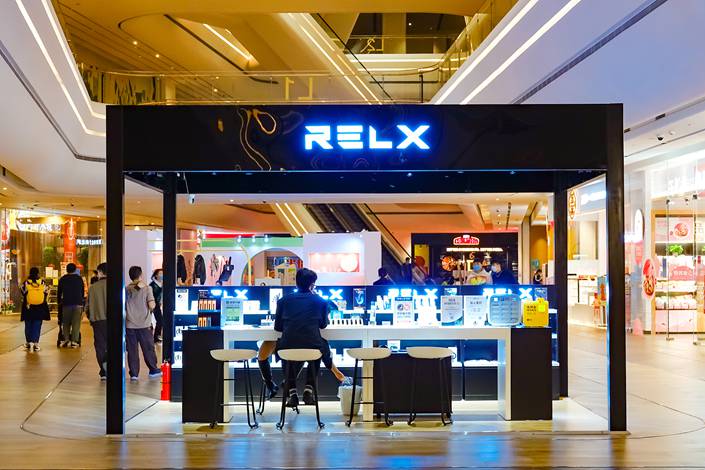 Shares of e-cigarette maker RLX Technology Inc. surged 146% on their first trading day in New York, as investors bought into its growth story despite heightened scrutiny of listings by Chinese companies in the U.S. and regulatory crackdowns in its home market.

RLX’s stock closed at $29.51 per share Friday, more than double its IPO price of $12 per share. The company raised nearly $1.4 billion from its share sale, which gave it a market value of $45.8 billion. That makes it one of the most valuable non-tech Chinese companies listed in New York.

Incorporated in 2018, RLX Technology manages China’s most popular vaporizer brand, Relx, which had a 62.6% market share in the first three quarters last year, according to its filing to the U.S. Securities and Exchange Commission.

China’s vaping industry continues to boom even after the country enacted a ban on online e-cigarette sales. Revenue from sales of Relx-branded vaping devices soared from 133 million yuan ($17.4 million) in the nine months to September 2018 to 2.2 billion yuan in the same period of 2020. The company made a profit of 109 million yuan in the first three quarters last year.

The listing comes as tensions between Beijing and Washington have escalated in recent months. Recently, the New York Stock Exchange moved to delist China’s three telecommunication majors after the Trump administration accused them of having ties to the military.

Adding to the headwinds facing Chinese companies is a law that could lead to them being kicked off U.S. exchanges if American regulators can’t vet their audit papers. But the deteriorating relations between the world’s two largest economies appears to have had little effect on Chinese companies’ thirst for U.S. capital.

After the offering, RLX’s CEO Kate Wang, the former head of Uber Technologies Inc.’s China operations, controls 54.3% of the company’s shares, and the other two co-founders David Jiang and Wen Yilong own 9.2% and 6% respectively. The trio all worked at Uber’s China operation and later its owner Didi Chuxing Technology Co. Ltd.

The strong market enthusiasm comes despite e-cigarettes repeatedly coming into the regulatory crosshairs in China, as authorities restrict how they can be sold over concerns of their potential health impact and use by minors.

The State Tobacco Monopoly Administration and the State Administration for Market Regulation jointly introduced the ban on selling e-cigarettes online in 2019, propelling RLX to shift from e-commerce sales to brick-and-mortar stores. Within a year of the ban, RLX had signed deals with more than 100 retail vendors, according to its prospectus, and had more than 5,000 exclusive franchise locations and over 100,000 retail locations by September last year.

The vaping rate is higher for those between the ages of 15 and 24 than any other age group, according to a report from the state media Xinhua News Agency. Eye-catching designs and flavors like raspberry cheesecake have been blamed for a spike in young nonsmokers taking up the devices, which were originally touted as a way to quit smoking.

The proceeds from the listing would be used for product research and development, expanding distribution and retail channels, building up the supply chain capabilities as well as adding to working capital, RLX said in the prospectus. Citigroup Inc. and China Renaissance were the joint bookrunners for the offering.