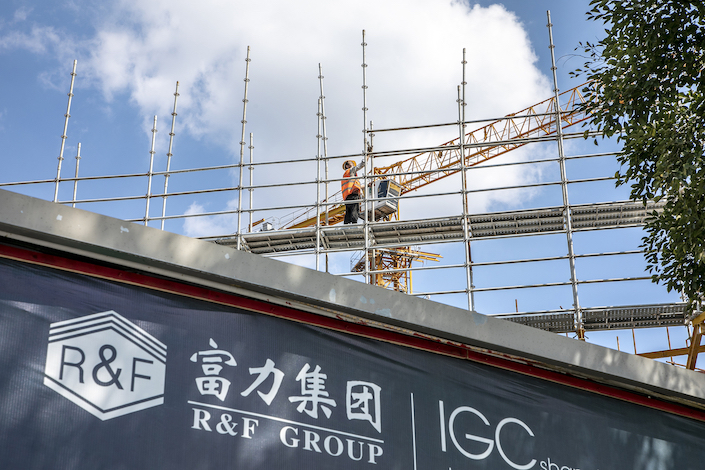 R&F Properties has been pursuing a number of options to generate cash for addressing massive looming debt maturities.

Hong Kong-listed R&F Properties’ Easy Tactic Ltd. unit will sell two-year notes with an annual yield of 11.75%, the company said Tuesday. Proceeds will be used to repay R&F Properties’ debts due within one year.

It will be the company’s second-priciest bond sale, with a yield only slightly lower than the 12% set for its $360 million dollar bond issuance in November. It will also be the second-costliest of all developers’ bond sales overseas so far this year with a yield more than double the industry average of 5.36% and more than four times that of two-year Chinese government debt.

The high cost reflects the debt’s below-investment-grade ratings. Fitch Ratings assigned the proposed U.S. dollar notes a B+ rating. Fitch rated R&F Properties at B+ with a negative outlook. The ratings are constrained by weak liquidity and refinancing risk, despite a strong business profile, Fitch said. The negative outlook reflects reduced access to onshore capital markets and refinancing risk on the coming maturities of R&F Properties’ capital-market debt.

Guangzhou-based R&F Properties was one of the fastest-expanding developers in southern China. It made headlines in 2017 by acquiring 19.91 billion yuan ($2.9 billion at that time) of hotel assets from cash-strapped conglomerate Dalian Wanda Group.

But R&F Properties has also been struggling with mounting debt over the past few years. As of the third quarter of 2020, the company had 185.1 billion yuan ($28.5 billion) of interest-bearing debt, including 65.9 billion to be repaid in one year.

The company has 12 outstanding bonds in the domestic market with a total value of 21.9 billion yuan in addition to 11 overseas bonds totaling $5.1 billion, according to market information.

Market analysts said R&F Properties faces high debt risks as its debt-to-net asset ratio exceeded 176.7% as of the first half of 2020, according to the company’s interim financial report. The company’s debt-to-asset ratio excluding advance receipts was 78.2% and its ratio of cash to short-term debts was 0.48.

All the figures exceeded the alarm levels set by regulators for property developers’ debt risks. According rules issued in August, developers that cross the so-called “three red lines” — a 70% upper limit for debt-to-asset ratio excluding advance receipts; a 100% upper limit for the net debt-to-equity ratio; and a one-to-one lower limit for cash against short-term debts — would not be allowed to increase their annual interest-bearing liabilities.

The borrowing directive was the latest attempt to exert control over real estate financing, a policy that’s been in effect with varying degrees of severity and success over the past few years.

R&F Properties has been pursuing a number of options to generate cash for addressing the coming debt maturities. In October, R&F completed placement of 257 million new shares. All of the net proceeds of HK$2.5 billion ($322 million) went to repay overseas debt.

In December, R&F Properties pledged equity in 10 subsidiaries in return for a massive bailout led by the Guangzhou provincial government as nearly $2 billion of debt comes due this month. The company didn’t disclose how much money it raised from putting up the share stakes as collateral for new loans.

The company is also trying to offload assets. In October, R&F sold interests in an office building it owned for nearly 2 billion yuan. In November, it sold a 70% stake in Guangzhou International Airport R&F Integrated Logistics Park to Blackstone Group for 4.41 billion yuan.

R&F Properties said in its latest financial report that the size of its interest-bearing debts dropped by 24.2 billion yuan in the third quarter from the first quarter, with debt-to-net asset ratio sliding to 166%.

Denise Jia contributed to the story