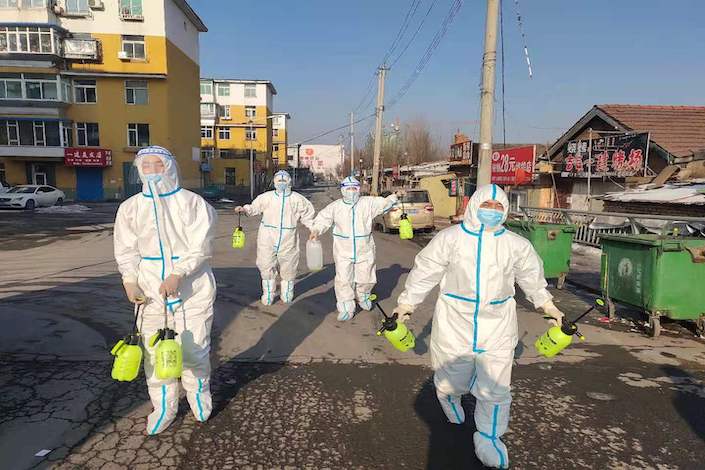 A police probe of an alleged Covid-19 superspreader and prosecutors’ involvement in it is stirring controversy among legal scholars who question whether there’s sufficient evidence that a crime was committed.

Police in Tonghua, Jilin Province, one of the hardest-hit areas in the latest outbreak, opened an investigation into whether a salesman identified as “patient zero” violated infectious disease prevention rules.

The salesman, surnamed Lin, was hired by a local retailer to promote health products to the elderly. Lin traveled frequently between Heilongjiang and Jilin and held health seminars for 145 people. He was identified Jan. 9 as an asymptomatic Covid-19 case and was directly linked to 82 infections.

Local police initiated an investigation, and Thursday the procuratorate of Tonghua said it intervened to guide the probe. At issue is whether the salesman violated China’s Law on Prevention and Control of Infectious Diseases, the prosecutorial agency said Thursday. Under Chinese law, spreading an A-category contagious disease can be punished with a maximum prison sentence of seven years.

But legal experts challenged the probe. A crime is committed only if the suspect knows he has an infectious disease, refuses to follow directions and deliberately violates control measures, said Liu Xianquan, dean of the Law School of East China University of Political Science and Law in Shanghai. Based on information disclosed by local health authorities, Lin didn’t know he was infected with Covid-19, nor did he refuse to follow control measures, Liu said.

“We can’t simply emotionalize justice just because he is patient zero,” Liu said.

Cai Zhenghua of the Yingke Law Firm in Shanghai said the owner of the retailer, who himself later tested positive as an asymptomatic case, also didn’t take any actions that would constitute the crime of obstructing the prevention of infectious disease.

Not all public events are suitable for judicial intervention, Cai said. As a last line of defense, criminal justice must remain modest, and the procuratorate’s intervention into police investigations should focus on supervision rather than guiding the investigation for the purpose of prosecution, he said.

The staff of the Tonghua procuratorate declined to comment, citing confidentiality of an ongoing case.

The investigation in Tonghua followed the recent announcement of punishment for a returnee from the U.S. who kept her Covid-19 symptoms secret, triggering dozens of infections. Longtime Massachusetts resident Li Jie flew with her family to Beijing in March as the Covid-19 epidemic began in the United States. She was diagnosed with the disease on arrival and was later found to have concealed her symptoms to secure passage back to China.

She was given a suspended jail sentence for violating disease control measures, causing “a serious risk that the novel coronavirus would spread,” according to the verdict.