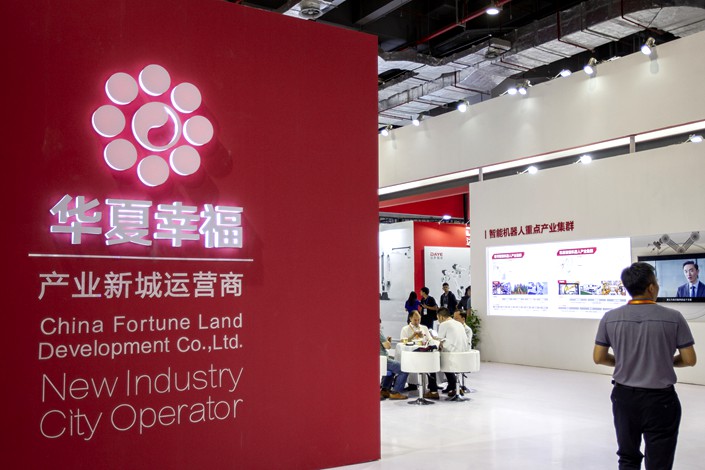 Cash-strapped property developer China Fortune said it couldn’t come up with the cash to make its debt payments due to the current economic and industry conditions coupled with the impact of the Covid-19 epidemic. Photo: VCG

China Fortune Land Development Co. Ltd. and its subsidiaries have defaulted on billions of yuan in debt as the property developer has struggled to scrape together cash amid a tightening regulatory environment.

The Shanghai-listed company said it has failed to pay 5.3 billion yuan ($813.5 million) in principal and interest on debts that include bank and trust loans, though not bonds, according to a company filing (link in Chinese) released late Monday.

China Fortune said it couldn’t come up with the cash to make the debt payments due to the current economic and industry conditions coupled with the impact of the Covid-19 epidemic. It added it was trying its best to raise money, and had reached a consensus with some financial institutions about a repayment delay.

The default adds to evidence of a brewing debt crisis among aggressive Chinese property developers as regulators step up oversight to curb excessive borrowing that they consider a threat to the country’s financial stability.

For China Fortune, Monday’s disclosure could be just the tip of the iceberg. At a meeting with creditors Monday, Chairman Wang Wenxue said the company has up to 100 billion yuan in debt coming due this year, sources with knowledge of the matter told Caixin.

The company had 23.6 billion yuan in cash on its balance sheet at the end of January, according to Monday’s filing, but much of it, or 22.8 billion yuan, was already earmarked for other purposes and could not be used to repay debts.

Wang said the company will speed up property sales, dispose of assets, and attract strategic investors to raise more cash to pay back its debts, the sources said.

China Fortune is seeking to postpone repayment on some of its interest-bearing debt, multiple creditors said, while how much of the debt and by how long it is delayed are questions that it will need to work out with its creditors.

At the meeting, Wang apologized to the over 200 institutional creditors in attendance, saying he felt “guilty,” and promised that he would never deliberately dodge debt payments, the sources said. He took part of the blame for the company’s debt problems that worsened amid the epidemic, saying he made misjudgments about the property market in the region around Beijing and drove the firm’s aggressive expansion.

China Fortune is based in Hebei province, which surrounds the country’s capital. The region, along with many other places in China, has been subject to tight oversight (link in Chinese) aimed at cracking down on speculation.

Furthermore, the epidemic had caused delays in some property projects, according to the China Fortune’s third-quarter report (link in Chinese). In the first three quarters of 2020, the company’s net profit attributable to shareholders fell 25.3% year-on-year to 7.3 billion yuan.

Over the years, Wang-controlled China Fortune has won support from the Hebei provincial government to back its rapid expansion.

Officials from China’s central bank, the country’s banking and securities regulators, and the local government also attended the meeting, people who attended the meeting said. They urged caution in dealing with the company’s debt problems and preventing risks to the financial system.

Yuan Tongli, a deputy head of the Hebei provincial government, warned that the situation constituted a “regional systemic risk,” the people said. He said he hoped creditors would consider the “politics” and the big picture of the situation and give the company time.

Last month, investor confidence tumbled as both of the company’s onshore and offshore bonds fell sharply.