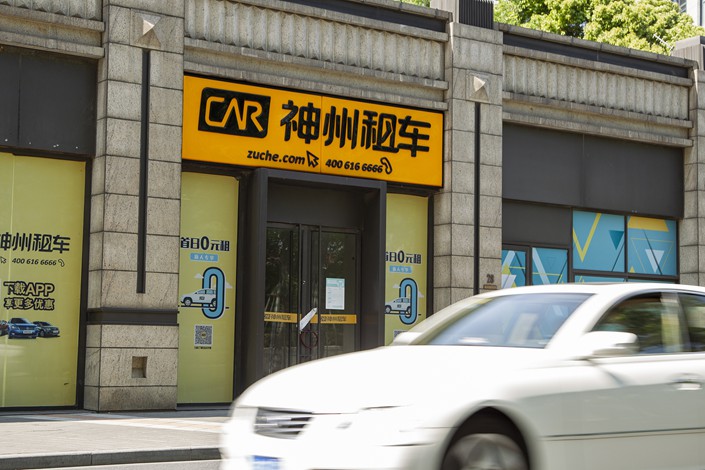 Auto rental specialist Car Inc. moved one step closer to delisting from the Hong Kong Stock Exchange with its Monday publication of a timetable to privatize. Photo: VCG

The end of the road as a listed firm is just around the corner for Car Inc., an auto rental specialist that once hoped to make big bucks by tapping a growing hunger for mobility from China’s booming middle class.

The company was once a highflyer that attracted the likes of former U.S. giant Hertz and top-tier private equity firm Warburg Pincus LLC as investors. But its hoped-for growth story ultimately stalled, and its reputation sank further last year when its name got sucked into the massive accounting scandal surrounding Starbucks Corp. challenger Luckin Coffee Inc.

This week Car Inc. moved one step closer to delisting from the Hong Kong Stock Exchange with its Monday publication of a timetable to privatize under a plan first floated in November. That plan saw private equity firm MBK Partners offer to purchase all of the company’s shares for HK$4 ($0.52) apiece — a more than 20% premium over the stock’s price the previous five trading days, but still less than half the HK$8.50 price from the company’s 2014 IPO.

The company said the offer, which was formally made by an MBK investment vehicle called Indigo Glamour Co. Ltd., was effective from Monday, and would run through Feb. 22. The company would be delisted after that if enough investors tendered their shares.

“Privatizing the company gives the leadership time to take a pit stop and take a good look under the hood to fix what needs fixing,” said an analyst at a midsize brokerage that recently considered buying the stock but ultimately decided to pass, speaking on condition of anonymity due to company policy.

The delisting would mark a quiet end for a company that once held out big promise as one of the earliest major entrants to China’s car rental market.

Quick out of the gate

Founded in 2007, Car Inc. made headlines in 2012 when Warburg Pincus invested $200 million for an undisclosed stake in the company, then known as China Auto Rental Holdings, in a deal that was billed as the biggest ever at that time in China’s car rental industry. A year later in 2013 it would make headlines again when it attracted $100 million in investment from The Hertz Corp., the U.S. car rental giant that filed for bankruptcy last year after its business tanked during the pandemic.

Car Inc. would go on to make its Hong Kong IPO in 2014, and briefly saw its shares more than double within its first year as a public company. But its stock gradually trended downward afterward as its growth failed to impress investors. In its latest annual report for 2019, the company’s rental car revenue grew a scant 4.1% to 5.6 billion yuan ($867 million), while its net profit tumbled nearly 90% to just 31 million yuan. Between 2016 and 2019, its revenue grew just 11%.

Even as its own prospects were fading, the company’s name would suffer more damage when it got tangled up in the scandal involving Luckin, an upstart Chinese coffee chain that shocked the world nearly a year ago when it confessed to inflating its revenue by $310 million in 2019. Car Inc. and Luckin shared a connection through Lu Zhengyao, the controlling shareholder of both companies.

Car Inc.’s shares lost more than half their value in the trading day after the Luckin fraud was first exposed, as investors worried the scandal could infect Lu’s other major assets. “It seems like after Car was contaminated by the Luckin scandal, which looked like it went all the way to the top, it was hard for investors to trust the company again,” said the analyst at the midsize brokerage.

Car Inc. would ultimately unwind itself from the scandal when its own controlling shareholder Ucar, a limousine services company controlled by Luckin boss Lu, agreed to sell about 21% of the company to MBK Partners in November for HK$1.8 billion. At the time, Car Inc. said the purchase would make MBK its second-largest shareholder behind Legend Holdings Corp., parent of PC giant Lenovo Group Ltd., which owned 26.6% when Car Inc. filed its interim report in September.

As is often the case with underperforming assets, MBK is likely to try to overhaul Car Inc. and improve its prospects before disposing of it in the future for a markup from its current value, which now stands at a relatively modest $1.1 billion.

“I suspect we will see the company in public markets again, but it may be a bit further down the road,” said the analyst at the midsize brokerage.