By Du Zhihang and Luo Meihan 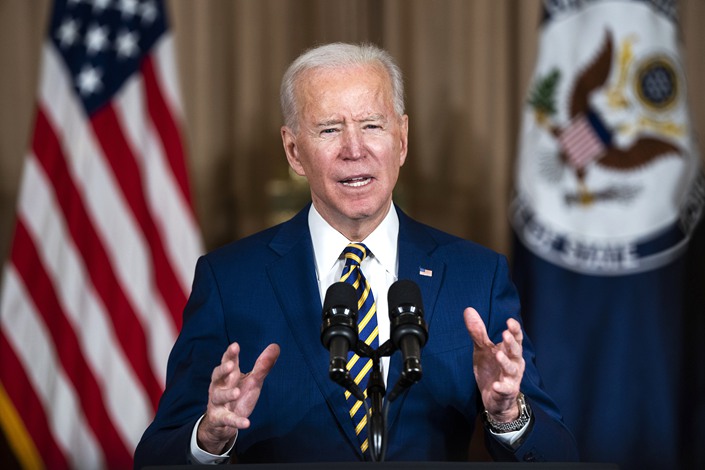 U.S. President Joe Biden vowed to take on challenges posed by China, describing it as America’s “most serious competitor,” but also signaled hopes for cooperation in a manner beneficial to Washington, in his first foreign policy address since assuming office.

“But we are ready to work with Beijing when it’s in America’s interest to do so,” he said, adding that the U.S. will compete from a position of strength by building back better at home, working with its allies and partners, renewing its role in international institutions, and reclaiming its largely lost credibility and moral authority.

Biden brought up China six times, second only to Russia, which scored eight mentions. He didn’t comment on a series of controversial issues including Hong Kong, Xinjiang and Taiwan.

Although warning that “advancing authoritarianism” could include the growing ambitions of China to rival the U.S., the new president discarded more aggressive language like “enemy,” “foe,” “threat,” and “predatory” to describe China, in contrast to the previous administration.

Several Chinese experts have said Biden’s cabinet picks indicate that the new administration will continue to be tough on China with a focus on intense competition.

Even with the handover of leadership in Washington, the relationship between the two countries is unlikely to see a radical change, said Wang Jisi, president of the Institute of International and Strategic Studies at Peking University. Wang predicted that the U.S. would maintain its tough line, saying that there would be “Trumpism without Trump.”

When emphasizing the importance of enhancing domestic competitiveness, Biden said that no country on Earth — not China or any other country — can match the U.S. if American businesses are positioned to compete and win on the global stage unfettered by rules of international trade that are stacked against them, and American workers and intellectual property are protected.

Speaking at a virtual World Economic Forum on Jan. 25, Chinese President Xi Jinping warned against ideological prejudice, called for a path of “peaceful coexistence, mutual benefit and win-win cooperation” and urged the world to stick to “consultation and cooperation instead of conflict and confrontation.”