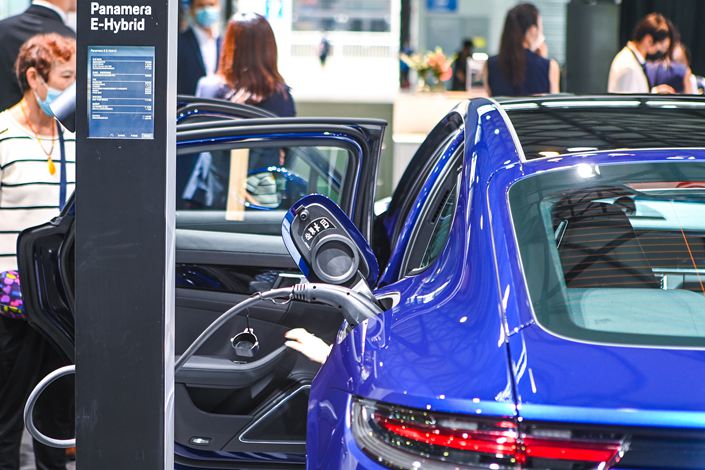 New-energy vehicles on display at an auto show in Shanghai on Oct. 3, 2020. Photo: VCG

The stock market performances of Chinese companies in the new-energy sector varied at the start of 2021, with some sliding significantly from recent rallies and others managing to sustain an upward trend.

Companies leading the slump in stock prices included the high-profile Chinese Tesla challenger Nio Inc., whose shares fell by 7.9% on Tuesday to $50.70, shrinking by nearly a fifth from a recent high of $62.80 on Feb. 9.

However, there were still some shining lights among other players in the field.

The share price of gold giant Zijin Mining Group Co. Ltd., which is valued at 344.5 billion yuan, had climbed by 44% on Tuesday from earlier this month. And shares in Jiangxi Copper Co. Ltd. jumped 62.7% on Tuesday from the Feb. 5 price of 30.4 yuan, taking its market cap to 87.6 billion yuan.

With already high market capitalizations, investors are looking for any new momentum that will make China’s new-energy companies even more valuable this year. And analysts are betting on the green energy sector’s fundamentals.

“New energy is a market that everyone is fighting for,” said fund manager Zhao Yi at ABC-CA Fund Management Co. Ltd., referring to strategic investment by the EU, the U.S. and China.

The battery and new-energy sectors are fundamental to Chinese policymakers’ attempts to upgrade the economy, and will follow the country’s own fortunes, said China Securities Co. Ltd. in a research report. What happens at a micro level will depend on incremental shifts in Chinese industrial policy, as well as similar moves in the U.S, the report added.

But Chinese companies still have a long way to go to meet a series of targets set by the country’s policymakers in a bid to boost the share of green energy in its energy mix.

The total capacity of China’s wind and solar power installations needs to more than double from 2020 levels to hit the targeted 1.2 billion kilowatts by 2030, and the share of new-energy vehicles (NEVs) in new car sales should be increased to 20% by 2025. The share for last month stood at 7.15%.

Driven by these aggressive goals, companies could further expand their business and capitalize on increasing demand to maintain their high market caps, said Zhao.

“There will be a wave of development (in new energy),” Chen said, “just like the year 2000 in the internet’s development.”

In order to have a say in setting prices in the energy industry, the development of renewables will be at the core of competition from large nations, Chen told Caixin. And China has demonstrated its determination for long-term development by backing the NEV industry chain for several years, Chen added.

As first-tier players in the global new-energy supply chain, Chinese listed companies in the sector would be ideal subjects for international investment, Zhao Yi predicted. He said that around 70% of the world’s major solar power companies are from China, and a majority of NEV battery manufacturers also are located in the country.

But a solar power analyst, who declined to be named, believed the market caps of Chinese solar power companies are too high, their future potential has been priced in, and hurdles such as excess power storage issues are still troubling the industry.

“All industries have bubbles, it’s just a matter of how many bubbles are in there,” Zhao said.

The official manufacturing purchasing managers’ index (PMI) slowed in January by 0.6 percentage points to 51.3, a level lower than usual in the same period in previous years, said Ding Lüming, a chief analyst at China Securities. The dip signals that upward economic momentum is waning, Ding said, adding that the first quarter this year could still see decent economic growth off 2020’s low base.

The Caixin PMI for January also indicated that the country’s services sector expanded at the slowest pace in nine months.

“The market should be more cautious and focus on opportunities with structural changes, not to try to cash in on current red-hot topics,” Ding said.