By Zhai Shaohui and Lu Yutong 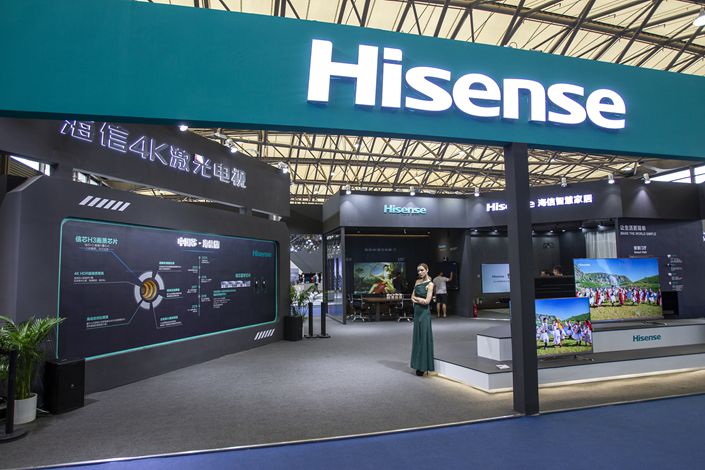 Chinese home-appliance maker Hisense aims to use cash to buy 83.6 million shares in Sanden through a private placement. Photo: VCG

The Foshan-based home-appliance company aims to use cash to buy 83.6 million shares in Sanden at 256 yen ($2.40) each through a private placement.

The successful purchase would make Hisense the controlling shareholder in Sanden, with 75% of voting rights, according to a statement to the Shenzhen Stock Exchange Monday.

The sale needs to be approved by Sanden’s creditors, who will meet in late April to discuss the deal.

In the market’s response to the announcement, Sanden’s share price closed down 17.28% on Tuesday, while Hisense’s rose by its daily limit of 10% one hour after the Shenzhen market opened. The rise in the Chinese company’s price triggered a share trading suspension.

The number of new shares due to be issued through the private placement is nearly three times the current number of Sanden shares trading on the market.

Hisense beat out 24 other companies to be the successful bidder, said Sanden, which has been mired in liquidity issues as a result of pandemic pressures and hoped the deal could consolidate its business.

Founded in 1943, Sanden specializes in the manufacturing of air conditioner compressors for vehicles and providing in-car air conditioning systems. It recorded a loss of 17.2 billion yen ($160.8 million) between April and December as the vehicle sales of its major customers, French carmaker Group PSA Ltd. and General Motors Co., plummeted by 11.5% and 27.8% year-on-year respectively in 2020.

The deal will help to expand Hisense’s business and also enhance Sanden’s profitability by utilizing the Chinese company’s global supply chain system and bargaining power in sourcing, the statement said.

China vehicle sales rose 29.5% in January as the market continued to rebound from a period of weakness exacerbated by the Covid-19 pandemic in the first half of 2020.