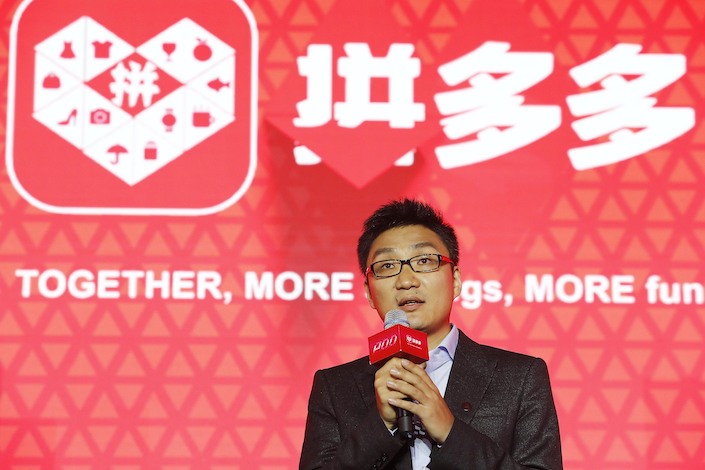 Colin Huang Zheng, the billionaire founder and chairman of Pinduoduo Inc., stepped down from the company’s board as the five-year-old startup overtook Alibaba Group Holding Ltd. to become China’s largest e-commerce business based on number of users.

Huang, 41, said in an open letter to shareholders Wednesday that his resignation was approved by the company’s board. Huang will be succeeded as chairman by Chen Lei, who is also Pinduoduo’s chief executive officer.

Huang, who handed over the CEO title to Chen in July, said he will give up the 1:10 super voting rights attached to his Pinduoduo shares as he relinquishes executive roles. He said he would entrust the voting rights to the board.

Huang also pledged to extend the lockup period for his shares by three years, according to the letter. The former Google engineer, one of the richest people in China, said he stepped down to pursue personal interests including research in food and life sciences.

The announcement of Huang’s departure came the same day that Pinduoduo set a growth record. The company’s number of annual active buyers rose 35% year-on-year to 788.4 million as of the end of 2020, surpassing Alibaba’s 779 million to become the largest e-commerce site in China.

Huang said Pinduoduo’s leadership transition was accelerated partly by a changing market environment caused by the Covid-19 pandemic. He originally planned to pass the chairmanship to Chen a year after he stepped down as CEO.

Chen is a founding member of Pinduoduo and has served as technology chief since 2016. He specializes in data science and was educated at Tsinghua University and the University of Wisconsin-Madison.

Dramatic changes in the external environment pushed Pinduoduo to accelerate internal operational improvement and groom a new generation of leaders.

“It is time to let them shape the Pinduoduo they aspire to build,” Huang said.

According to a July regulatory filing, Huang owned 29.4% of Pinduoduo after he donated nearly $14 billion of his shares to charities and the Pinduoduo Partnership when he stepped down as CEO. Before the reduction, Huang held 43.3% of the company and 80.7% of the voting power.

Pinduoduo didn't respond when asked whether Huang will remain a member of the Pinduoduo Partnership committee, created to ensure the company’s sustainability and governance. Pinduoduo set up the partnership committee in July 2018 with Huang and Chen as the only initial members. The committee has the right to nominate board members and the management team.

Huang ranked as the second-richest person in China with a net worth of $45.4 billion before the July stake donation, behind only Tencent founder and CEO Pony Ma, according to Forbes magazine’s Real-Time Billionaires Rankings.

Shanghai-based Pinduoduo reported 26.5 billion yuan ($4 billion) of total revenue in the 2020 fourth quarter, an increase of 146% from the same period a year ago, according to Pinduoduo’s unaudited financial report released Wednesday. The growth partly reflected Pinduoduo’s push into grocery and agricultural product sales during the pandemic lockdowns.

But the company has yet to make a profit. The net loss attributable to ordinary shareholders was 1.4 billion yuan, compared with 1.8 billion a year ago, according to the report.

Pinduoduo is aiming to “become the largest grocer in the world,” new Chairman and CEO Chen said. The company will continue investing in an agriculture-focused logistics infrastructure platform over the next few years, Chen said.