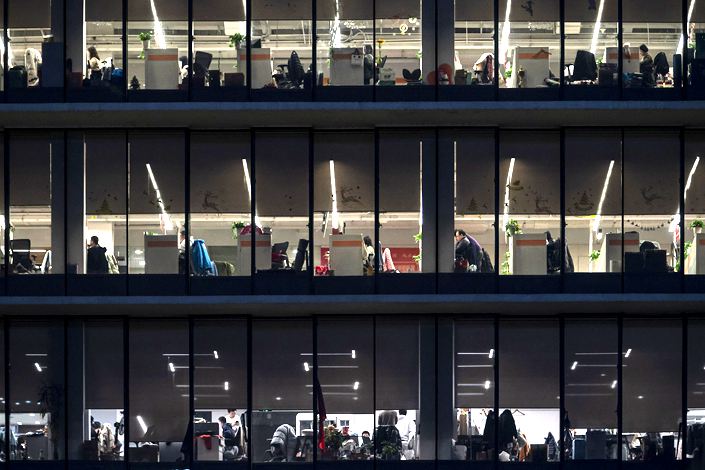 The recent deaths of two young employees at Pinduoduo have drawn sharp criticism that the e-commerce upstart may have expanded its business at the expense of workers’ health. Photo: VCG

The recent deaths of two young employees of e-commerce upstart Pinduoduo Inc. have raised concerns that the company may be exploiting its employees at the expense of their health, deepening criticism of the Chinese tech sector’s punishing work culture.

In January, an engineer surnamed Tan who worked in Shanghai for Pinduoduo’s recently established payment service Duoduo Wallet, jumped to death in his hometown of Changsha, the capital of Central China’s Hunan province.

The Nasdaq-listed company launched Duoduo Wallet in December as it ramped up its effort to seize a piece of the third-party mobile payment business. The sector is dominated by Alibaba Group Holding Ltd.’s Alipay and Tencent Holdings Ltd.’s WeChat Pay, with a combined share of over 90%.

Duoduo Wallet evaluates its staff according to stringent criteria and only allows them to take two days off per month, sources with knowledge of the matter told Caixin. Tan’s college roommate told the Chinese version of Esquire magazine that Tan became increasingly introverted after joining Pinduoduo and complained about his overwhelming workload.

That case thrust the Shanghai-based company back into a spotlight that shone on it two weeks earlier, when a 22-year-old woman working for its online grocery shopping service Duo Duo Maicai in Northwest China suddenly died after work.

Duo Duo Maicai is another new business that has grown rapidly. Pinduoduo piloted the service in two cities in August before taking it nationwide. “(Duo Duo) Maicai is a promising and long-term program, though there are numerous challenges for our employees to develop it,” Pinduoduo founder and Chairman Huang Zheng, also known as Colin Huang, said in an October speech to mark the company’s fifth birthday. In that speech, Huang told his employees to “get into the hardcore struggle mode.”

Following the Duo Duo Maicai employee’s death, a worker surnamed Wang was fired in January soon after he posted online a photo of an ambulance carrying away a colleague who had collapsed at the office. Wang said most ordinary Pinduoduo employees are required to work 300 hours per month, while headquarters staff at Duo Duo Maicai are required to work 380 hours per month. That works out to over 12 hours a day, if no days are taken off in the month.

For a long time, young professionals in China have seen working for a fast-expanding internet giant or a promising unicorn as an aspirational sign of success.

Those who can stick it out for a decade or more would likely expect annual salaries of up to 1 million yuan. Some young high-flyers are even able to afford multimillion-yuan homes in big Chinese cities such as Beijing and Shanghai — a standard of wealth unattainable to the vast majority of people.

Although these success stories have become less common over the last two years as the Chinese economy has slowed, tech companies’ compensation is still among the best on offer and their appeal to young professionals seems undimmed. Many people are willing to sacrifice their mental and physical wellbeing in the short term as they bear these companies’ so-called “996” work culture, in which employees are required to work from 9 a.m. to 9 p.m., six days a week.

At Pinduoduo, normal working hours last from 11 a.m. to 11 p.m., six days a week. When programmers at Pinduoduo’s technical group work a night shift, they have to work 20 consecutive hours from 11 a.m. to 7 a.m. the next day.

According to China’s labor law, employees can be ordered to work no more than eight hours a day and no more than 44 hours a week by average. If employers want to extend employees’ working hours, they should reach an agreement with employees and labor unions first. To protect the health of employees, employers are not allowed to extend working hours by more than three hours per day or 36 hours per month. Companies could be fined for breaking this rule. Duo Duo Maicai employees’ 380 hours of monthly work exceeds the legal limit by around 80%.

In China, although most internet companies have unions, they do not perform well and some of them are even set up to serve the companies, rather than the employees, industry insiders say. A labor regulator official told Caixin that in reality, it is very hard to implement the labor law. “Currently, risking one’s health or even life for money is very common (in China). Some workers want to make more money by working overtime. It is very hard to identify if a company illegally extends employees’ working time,” he said.

At Pinduoduo’s 2018 annual conference, an employee asked Huang when they could start to take two days off per week. Huang said staff should wait until Pinduoduo becomes China’s No. 2 e-commerce company. In October 2019, Huang announced Pinduoduo’s latest quarterly gross merchandise value (GMV) — the total value of orders placed across its online platforms — had for the first time exceeded longtime No. 2 JD.com Inc.

However, Pinduoduo’s employees are still waiting for him to fulfill his promise.

In fact, the work culture seems to have worsened. Since mid-2018, the technology and internet sector has seen the money taps begin to run dry as economic growth has slowed. There was speculation that the market would bottom out and companies would downsize, go bust or restructure to survive.

The pressure of keeping these companies alive has fallen in great part on the ordinary employees.

Pinduoduo’s business growth has significantly slowed. Year-on-year growth in GMV for a 12-month period slowed to 73% in the third quarter of 2020 from 583% in the second quarter of 2018.

“(Pinduoduo) did not take management seriously in its stage of rapid expansion. When growth in its revenue, GMV, and other operational indicators gradually slowed, it used a militarized management style to ensure teams’ battle effectiveness. But its ability to manage staff is worrisome,” a former staff member said.

The work environment was “normal in 2018, bad in 2019, worse in 2020, and hopeless in 2021,” a person who claimed to be a former Pinduoduo programmer wrote in an article titled “My Three Years in Pinduoduo” that was posted online in January. For example, Pinduoduo has taken measures including strictly limiting and measuring the amount of time employees eat at work, blocking cellphone signals at the office and banning the creation of online private employee group chats, he wrote.

The former programmer said that many employees made accounts on Maimai, a job-focused social media platform that allows people to communicate anonymously, to keep up with what’s going on in the company.

CEO Chen Lei revealed in October that the company had less than 7,000 employees, while analysts expected it to earn about 50 billion yuan in revenue in 2020. That means each Pinduoduo employee contributed an average of 7.14 million yuan to the company’s revenue, significantly higher than the 1.5 million yuan figure for 2017.

“How hard do the staff have to work (to achieve this)?” asked someone working in human resources for another internet giant.

The deaths of its workers aren’t slowing Pinduoduo’s push for growth. In January, the Shanghai labor supervision department launched an investigation into its working conditions. That same month, it launched Duo Duo Maicai in the city.

The department has not announced the results of its investigation yet. Possibly due to the impact of the deaths of the two employees, Pinduoduo’s sponsorship deal with CCTV for the state broadcaster’s annual Spring Festival Gala TV show was cancelled in January, which is regarded as one of the year’s biggest advertising events.

“In my view, Pinduoduo is only responsible to shareholders and barely cares about its merchants, users, and employees,” the former staff member said.

Timmy Shen and Luo Meihan contributed to this report.

In Depth: ‘Blood and Sweat’ Don’t Pay Off for China’s Army of Delivery Workers

In Depth: How Workers Got Left Out of China’s Internet Boom