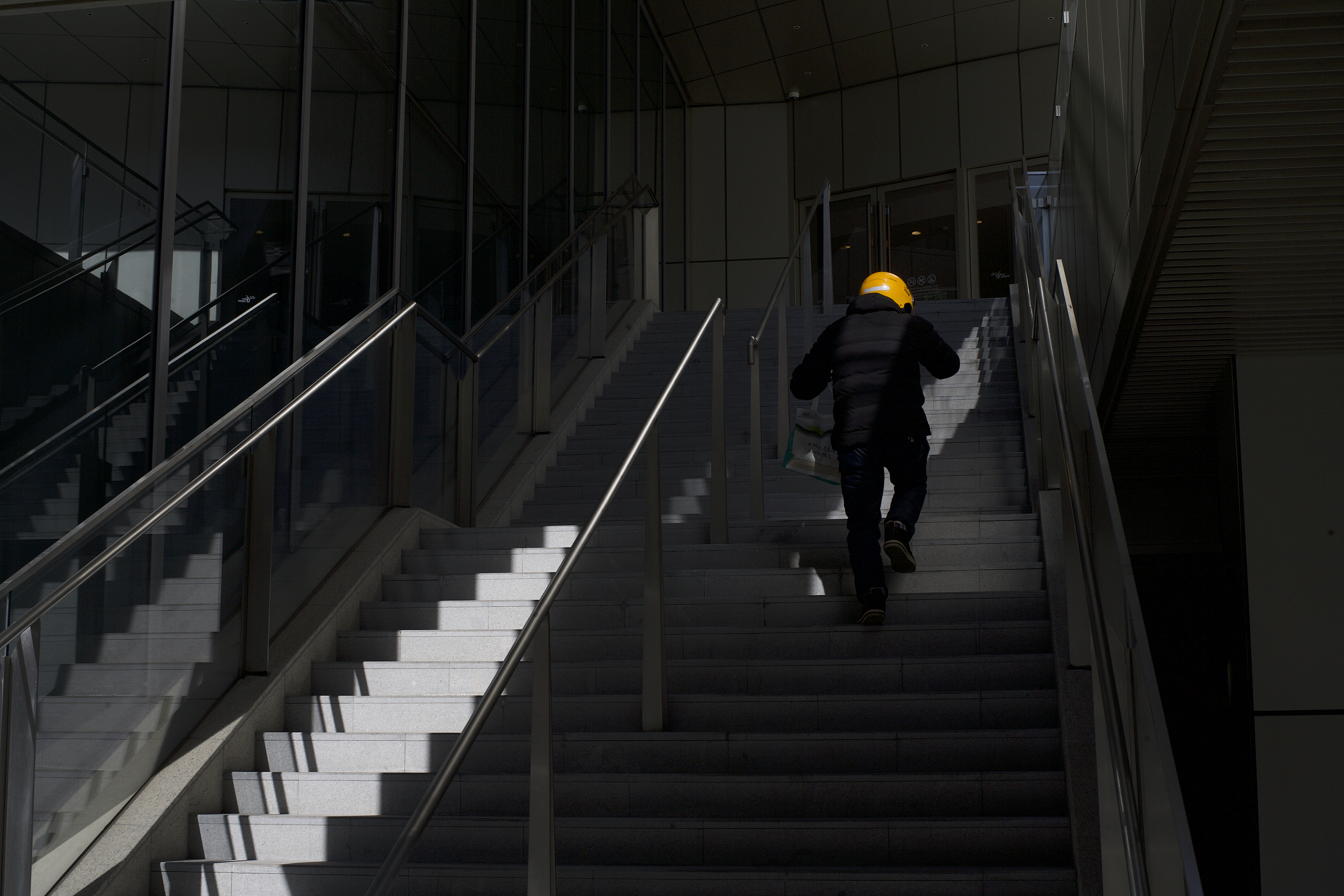 How Workers Got Left Out of China’s Internet Boom

Internet giants in China have expanded rapidly due to the business opportunities brought by the Covid-19 pandemic, yet the expansion has come at the cost of the health of their employees.

Last year, the pandemic created enormous opportunities in areas such as online workplaces, medical care and community group-buying. China’s internet companies, many of which had been troubled by difficulties in user growth for several years, quickly adjusted their strategies to expand into these areas. Meantime, their share prices ballooned and market caps soared, which in turn increased competitive pressure.

Employees are the victims of such pressure. Around the turning of the year, a series of unnatural deaths and self-inflicted employee injuries became a black eye for the industry.

Nasdaq-listed Pinduoduo Inc., for example, recently found itself in public relations crises. A new employee of the fast-growing e-commerce platform’s new service Duo Duo Maicai collapsed and died in the wee hours of Dec. 29 while walking home from a long shift.

Pinduoduo later made a comment about the accident on China’s Quora-like Q&A platform Zhihu, saying: “Everyone is making money by sacrificing their physical health ... You can choose to live an easy and comfortable life, but expect to take on the consequences such a life will bring.”

This fueled public anger. Although the company soon took down the post, it clearly showed the internet companies’ arrogance, ruthlessness and disregard for their employees.

Then another tragedy struck. On Jan. 8, a Pinduoduo employee anonymously posted a photo on social media of an ambulance carrying away a coworker who had collapsed at the office. The human resources department found the employee and fired him soon after. The next day, a programmer who had worked for the company for only six months jumped to his death. Hear Caixin-Sinica Business Brief: Pinduoduo Sparks Concern Over Labor Practices

Around the same time, Ele.me, the country’s second-largest food delivery platform and owned by Alibaba Group Holding Ltd., also got into trouble. A 43-year-old courier for Fengniao Zhongbao, Ele.me’s crowdsourced on-demand logistics service, collapsed on Dec. 21 while delivering his 34th order for the day. The company initially said it could only provide 2,000 yuan ($309) in compensation to his family on the grounds that he did not have a formal labor relationship with Ele.me. Later, under public pressure, it agreed to pay the family 600,000 yuan. It also raised the amount that its couriers are insured for to 600,000 yuan from 30,000 yuan.

On Jan. 11, a 48-year-old Ele.me courier set himself on fire in protest over unpaid wages. He remains in the hospital. 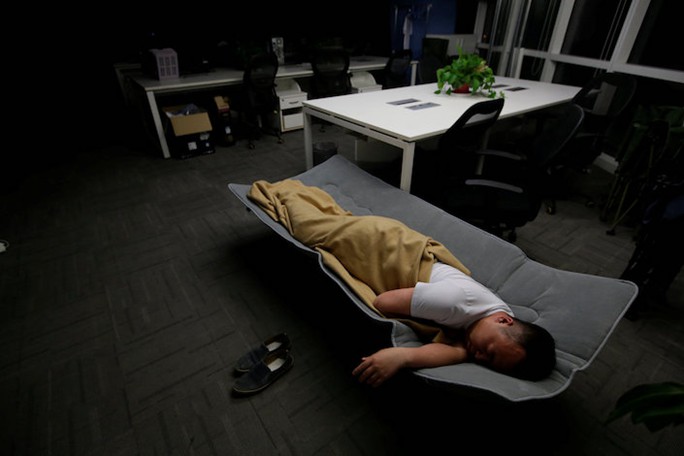 An Internet engineer sleeps on a camp bed at his office after working into the night. 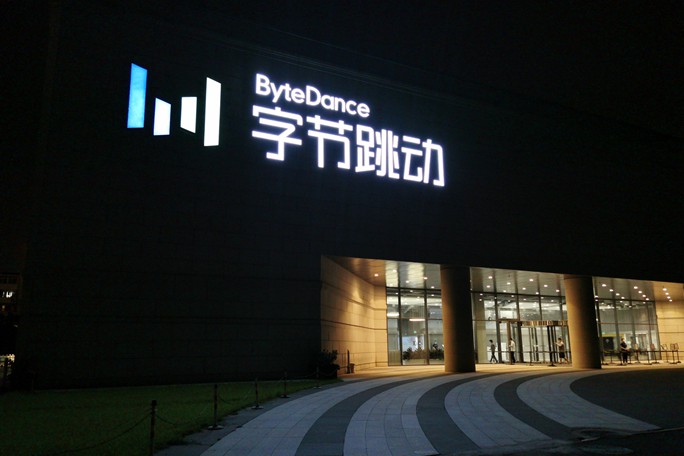 A ByteDance sign illuminates the company’s headquarters in Beijing on Aug. 9.

A takeout deliveryman runs up the stairs outside a shopping mall in Shanghai on Jan. 8. 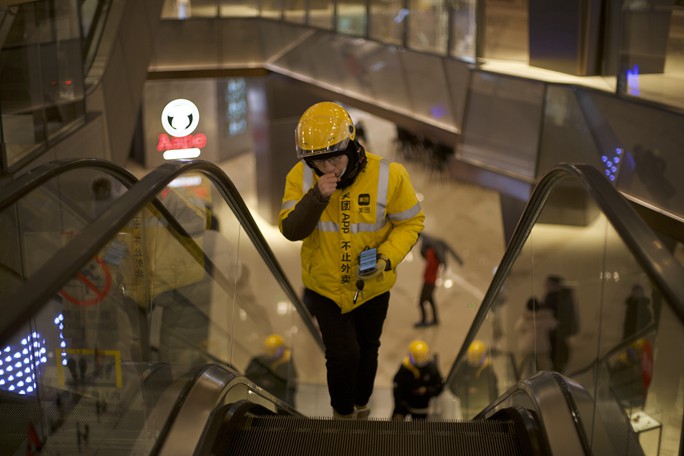 A deliveryman rides up an escalator at a mall.

A delivery driver checks his phone for new orders in January 2019.

Alibaba employees check how many orders have placed on the online shopping platform Taobao during its annual Double 11 sale in 2015 in Hangzhou, East China’s Zhejiang province.

A host introduces products that will be sold on e-commerce platform Pinduoduo during a livestreaming event on April 13 in Fuzhou, East China’s Jiangxi province.

Workers sit at their computers in March 2016 at an office of Toutiao, a news aggregator owned by ByteDance.

For a long time, young professionals in China have seen working for an internet giant or a promising unicorn as a sign of success.

At the internet giants, fresh graduates can often get an annual salary of at least 150,000 yuan, which can easily reach 500,000 yuan in three to five years. It’s not unusual to see employees earning 1 million yuan a year a decade after they graduate. More importantly, some young high-flyers can easily buy homes and cars in any of China’s four biggest cities — Beijing, Shanghai, Guangzhou and Shenzhen — or Hangzhou, where Alibaba is based.

However, such success stories have become less frequent over the past two years.

Since mid-2018, companies in technology and internet industries have run into financing and IPO challenges as policies have tightened. There was speculation that the market would bottom out while companies adjusted their structures and downsized to survive. Only companies in a few emerging sectors, such as short videos and livestreaming, managed to ramp up hiring.

This has given internet companies massive pressure to survive, which often translates to the growth pressure that many employees need to shoulder.

As a result, companies spare no effort to realize expansion in key indicators such as the number of users, gross merchandize volume, revenue and profit. Oftentimes, an increase of less than 30% is unacceptable.

Meanwhile, employees need to work hard to improve performance in the hope of getting promoted. They often bear in mind a “35-year-old glass ceiling,”— failing to cross it might indicate that they will be kicked out of the game.

The exacerbating worries heightened as China’s economy grew at a slower pace amid the pandemic. Caixin found through interviews that new recruits, veteran employees who have worked for 10 years, and even business heads all have their own concerns amid the cutthroat competition.

The six well-known overseas-listed internet giants — Alibaba, Tencent Holdings Ltd., Meituan, Pinduoduo, JD.com Inc. and Baidu Inc. — expanded their staffs along with the rapidly expanding industry. In 2020, the overall headcount of JD.com, including the workers at its self-owned logistics system, surpassed 320,000, ranking first among the six. After consolidating leading Chinese hypermarket operator Sun Art Retail Group Ltd. in its latest quarterly financial statement, Alibaba doubled its total number of staff to 250,000 last year. ByteDance and Tencent had about 100,000 and nearly 80,000 staff, respectively. Meituan had over 60,000 employees, with around 4 million registered food delivery couriers.

Allen Zhang, founder of WeChat, China’s most used app, said on Jan. 19 that as internet giants grow, young people entering the industry don’t have the same opportunities as he did years ago to independently create a product from scratch. They are only contributors to the overall business development.

“If a team of 100 people can’t make a good product, then it’s impossible for 1,000 people to do so, or they may perform worse due to the high interpersonal consumption,” Zhang said.

More than anything, the fact is that some internet companies are rapidly expanding their headcounts without improving their management or considering their own long-term development. Worse still, some companies have even introduced “militarized” management methods such as privacy monitoring, information blocking and interpersonal isolation, which marks a big departure from their management philosophy and corporate culture.

Their high-salary incentive mechanism focuses on getting the most out of employees to generate as much revenue as possible, regardless of how long they work. The so-called 996 work culture, in which employees work from 9 a.m. to 9 p.m., six days a week, is particularly prevalent at certain up-and-coming internet companies, such as Pinduoduo. In fact, even in some well-established companies such as Tencent and Alibaba, internal competition is getting fierce.

The negative sentiment of labor-capital antagonism has been growing at some internet giants with the internal management imbalance. The human resources and public relations departments of these internet giants are under growing pressure to maintain internal stability.

In April 2019, criticisms of 996 culture broke out on social media. Jack Ma, billionaire founder of Alibaba, said at the time that he saw such hard working as a gift. “I personally believe 996 is good fortune” Jack Ma, founder of Alibaba

“I personally believe 996 is good fortune,” he said. “Many companies and people don’t even have a chance to do 996. If you can’t do 996 when you’re young, when can you do 996? If you haven’t done 996 in your life, should you feel proud? … If you don’t wish to expend more effort and time than others, how can you achieve the success you want?”

JD.com founder Richard Liu said the next day on WeChat that people who “laze away” their days are not his brothers and cannot fight alongside him.

Such comments have triggered boycotts and ridicule from internet users. Since then, criticisms of 996 have continued.

Chinese internet companies have long been advocates of speedy expansion, as they work day and night to catch up with rivals. However, aimless expansion no longer fits the industry as companies now need to fix their management problems, comply with laws and regulations and fulfill their corporate social responsibilities, industry insiders said.

Internet companies can no longer avoid issues like legal compliance with employment rules, protecting employees’ rights and interests, and balancing efficiency and fairness, they said.

In Depth: ‘Blood and Sweat’ Don’t Pay Off for China’s Army of Delivery Workers