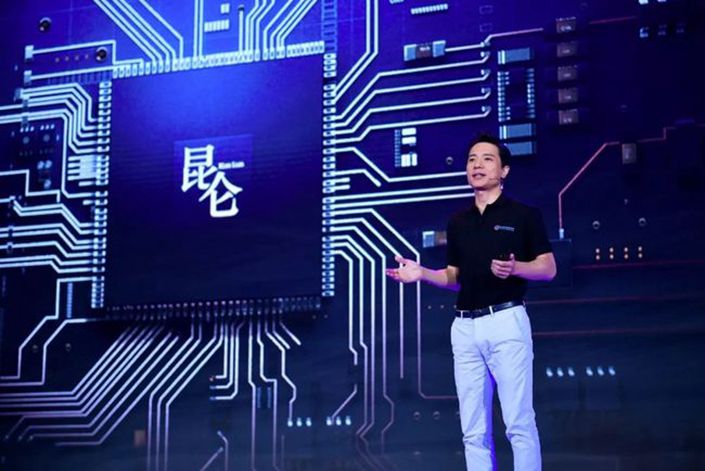 The latest round of investment in Kunlun, which designs and manufactures AI chips that are used by its parent Baidu for autonomous driving and cloud computing projects, valued the company around $2 billion.

Baidu Inc. said Wednesday it has completed a funding round for its artificial intelligence (AI) chips unit, one day after the search engine operator made an uninspiring Hong Kong debut.

The round of investment in Kunlun, which designs and manufactures AI chips that are used by Baidu for its autonomous driving and cloud computing projects, valued it at around 13 billion yuan ($2 billion), Baidu said. However, representatives for the company would not say how much it raised.

It’s the first funding round to treat Kunlun as a standalone business, Baidu said, increasing speculation that the unit will seek to recruit more external clients and even spin itself off as a separate company. About half of Kunlun’s chips were used by third parties last year, according to Baidu.

Baidu’s chip efforts come as China tries to achieve tech self-sufficiency ambitions against the backdrop of the U.S. tightening restrictions on some Chinese companies’ abilities to purchase chips made with American technology.

Earlier this week, New York-listed Baidu raised HK$24 billion ($3.09 billion) in a secondary Hong Kong listing. Its shares opened 0.8% up from its offering price of HK$252 on their debut and climbed as high as HK$256.60 before settling unchanged at market close.

Its Hong Kong shares fell 9.65% in Thursday trading. Its Nasdaq shares closed down 8.55% on Wednesday.

Since Baidu set up Kunlun in 2018, the company has manufactured 20,000 of its first-generation 14 nanometer chips. The second generation of Kunlun chips will begin mass production in the second half, the company said.

Ruan Xiaoli, a board member at investment bank China Renaissance, which was exclusive financial consultant on the funding round, said Kunlun is expected to expand its client pool beyond Baidu in the wake of the funding round.

Baidu said it plans to pump half of the Hong Kong IPO proceeds into R&D surrounding its AI initiatives, including smart driving and AI chips. That follows a long-term strategy of big bets on AI business as a way to wean off an addiction to search advertising revenue, which has been throttled by new players.

The company ranks among the top large-scale domestic tech-based internet companies in terms of R&D spending. Last year such expenses took up 18.2% of its total revenue, while Alibaba’s only accounted for 8.5% over the same period.

Tencent Holdings Ltd. is a major investor in AI chip startup Enflame Technology and has led four rounds of investment for the company. The latest Series C funding round raised 1.8 billion yuan in January 2020 and valued the firm at 10.8 billion yuan.

AI chipmaking startup Cambricon Technologies Corp. Ltd. (688256.SH) was the first such Chinese company to go public in Shanghai. Its market value has topped 56.6 billion yuan but the company hasn’t yet turned a profit, posting a loss of 660 million yuan last year, 75% larger than in 2019.