By Bao Zhiming and Flynn Murphy 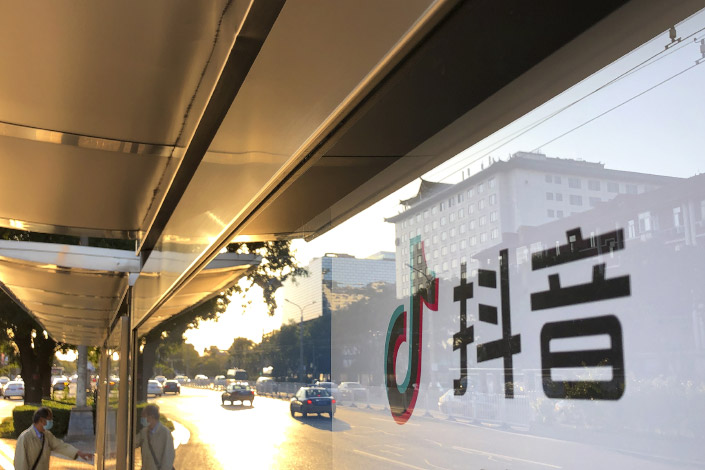 A sign for Douyin hangs in Beijing on Oct. 2. Photo: VCG

Short video platforms are emerging as a messy new front in China’s long battle against dodgy medical advertising, with TikTok’s Chinese twin forced to deny allegations it allows people to masquerade as doctors to sell products.

It comes after ByteDance Ltd.’s Douyin was accused by online media outlet Kailuobo of hosting content where people pose as doctors in order to give “health” advice that actually guides users to products like nasal sprays, some with hundreds of thousands of likes.

In a March 22 statement (link in Chinese), Douyin said only high-level institutions and real doctors can be certified as medical accounts on the platform, allowing them to publish content like medical advice after a review by an in-house “professional team.” Noncertified users face a ban from the platform if they post medical content, Douyin said.

Nevertheless, Caixin found ads for products masquerading as medical advice remain prolific on the platform’s uncertified accounts. In just one example, a man dressed in a lab coat using the title “doctor” doles out medical tips and encourages viewers to buy everything from baby wipes to chiropractic tools. Some of his videos have hundreds of thousands of likes.

Douyin further denied claims aired by Kailuobo that middlemen were helping fake doctors to be certified as medical accounts on the platform in return for payment.

“The information circulating online about spending money to be certified on Douyin as a doctor or medical institution is 100% false,” the company said.

Adding another layer of complexity, a person with knowledge of medical content production for Douyin told Caixin that many of the “doctors” that appear in medical videos on the platform are in fact paid actors, though real doctors may help write their scripts.

“Real doctors might not be the most expressive people, so using paid actors can create more interesting content, attracting more users,” the person said.

UC Browser said in a Monday statement that it had removed such ads and vowed to better verify advertisers. Qihoo 360 made similar promises in its own statement Monday.

China’s controls on medical advertising mirror those in other jurisdictions around the world intended to prevent consumers from being taken advantage of — particularly those who may be vulnerable to spurious claims because they are struggling with a chronic or terminal disease.

China’s Advertising Law sets out advertising standards for drugs and medical devices, banning unscientific and unproven claims, patient and doctor testimonials, and comparisons with other drugs and devices. It also holds that such ads in all media must be examined by the relevant authorities prior to publication, and places the burden of proof on the advertiser to provide relevant documentation supporting the claims in the ad.

The law also holds that ads for food, alcohol and cosmetics must not employ medical terminology that might lead the public to confuse them with pharmaceutical products.

Meanwhile, 2016 rules issued by the media regulator focused specifically on medical advertising, with a requirement that medical programs be produced only by radio and television stations — and mandating that they be pre-vetted.

It also sets qualification requirements for medical and nutritional experts hired as guests on such programs, with the onus on those making the programs to obtain and furnish proof of the experts’ background.

Misleading medical advertising in digital spaces remains a sensitive issue in China five years after widespread outrage over the death of 21-year-old Shaanxi province college student Wei Zexi, who said he was misled into undergoing a costly and unproven cancer treatment in Beijing by an ad on Baidu, the country’s leading search engine.

Wei laid out the specifics of his sad case in a post on the platform zhihu.com around two months before his death, which also took aim at the military hospital he attended for falsely claiming it was working with Stanford University on a medical trial. The treatment cost 200,000 yuan ($30,400), and Wei's parents said they had used up all their savings to pay for it.

The case raised questions about Baidu’s melding of search and advertising and brought a rebuke from the Cyberspace Administration of China, one of the bodies that regulates the Chinese internet, saying Baidu Inc. was not allowed to rank search results based on how much people pay.

Baidu said it had undergone a restructuring to remove illegal medical advertisers from its platforms when it finally returned to the space three years later with a series of deals.