Cover Story: How a Gigantic Ship Shows the Fragility of Global Trade 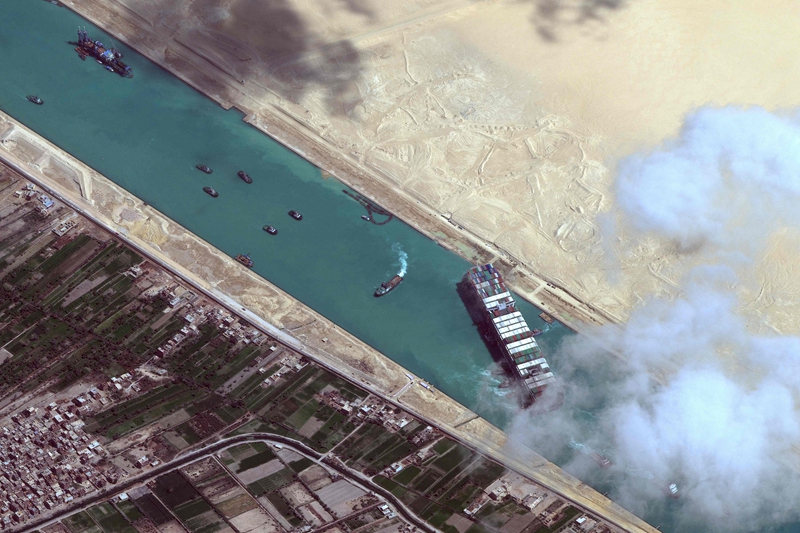 Five days after the giant container ship Ever Given was dislodged from the Suez Canal, the last of 422 stranded vessels passed through the Egyptian waterway.

As traffic returned to normal, a 12-day saga that upended the maritime shipping industry with the worst backlog on one of the busiest maritime trade routes came to an end. But the effects of the incident are likely to continue rippling through the global supply chain for some time to come.

The 240,000-ton Ever Given, one of the world’s largest container ships, was pulled free Monday after it ran aground in the southern part of the canal, blocking traffic in both directions for more than six days and snarling global trade. About 12% of world trade and 8% of liquefied natural gas pass through the canal each day, as do around 1 million barrels of oil. More than 50 vessels transit the canal each day, making it the most important trade corridor linking Asia with Europe and U.S. East Coast.

The Suez Canal blockage could cost global trade $6 billion to $10 billion a week, a study by German insurer Allianz showed. The incident adds further pressure to global supply chains already reeling from a pandemic that has caused shortages and delays. It also shows how the crucial passage could turn into an Achilles’ heel of global trade.

While last month’s blockage forced more than 400 vessels carrying everything from oil to livestock to heave to while awaiting passage, other ships diverted to the longer route around the southern tip of Africa. Clearing the disarray in global trade caused by shipping delays may take months, experts said.

The number of cargo ships traveling between China and Europe will decline dramatically in late April because of delayed schedules, pushing up freight rates and adding to pressure on shipping capacity. In addition, ports will face a crunch as a glut of delayed vessels arrives.

Some ships couldn’t get back to China on time because of the blockage, which will delay those scheduled to steam to Europe and the Mediterranean at the beginning of this month by roughly two weeks, said Zhou Shihao, the chief executive officer of logistics information provider YunQuNa. It could take at least a month to fully mitigate the impact of the Suez Canal blockage, he predicted.

Dislocations have hit Chinese enterprises both shipping and receiving goods and have led to volatility in freight rates, Gao Feng, spokesperson for China’s Ministry of Commerce, said Thursday at a briefing in Beijing.

The world’s largest container shipping line, AP Moller-Maersk A/S, temporarily halted short-term bookings on its online platform as well as short-term contracts as it is “expecting a significant loss in capacity over multiple weeks,” the Danish company said March 30. China’s Cosco Shipping Holding Co. Ltd., the world’s No. 3 shipper, also stopped accepting orders on the Red Sea route through the end of this month, people close to the matter told Caixin.

Opened in 1869, the Suez Canal is the shortest maritime route linking Asia and Europe, cutting travel time between the two continents by as much as 10 days and 10,000 kilometers compared with travel around the coast of Africa. But with an average width of 205 meters, the canal faces increasing challenges to accommodate gigantic vessels like the Ever Given as container ships grow bigger and bigger.

Although the Egyptian government’s Suez Canal Authority argues that the waterway is the best shipping option due to its safety and efficiency, the incident prompted fresh international efforts to find an alternative. That may include a long-discussed rail link between the Red Sea and the Mediterranean planned by Israel and Arctic sea routes advocated by Russia.

Traders with urgent delivery needs have scrambled to seek alternative solutions by land, air or rail. Following the blockage, demand for cargo trains traveling between China and Europe surged despite rising rates, but room for expanding capacity has been limited.

“Since the pandemic, trains linking China and Europe have been nearly fully booked,” said an employee of German logistics company Kuehne + Nagel International AG. ”It now can only squeeze some space for urgent deliveries.”

The Japanese-owned, Taiwanese-operated Ever Given was traveling from China to the Netherlands carrying upward of 20,000 shipping containers when it got stuck sideways near the southern end of the Suez Canal early March 23. The bow of the gigantic ship jammed into the canal's sandy eastern wall while its stern lodged against the western wall, blocking the waterway.

After the canal authority’s early attempts to pull the ship from the sandy bank failed, international salvage teams joined the effort. Hundreds of people worked around the clock trying to refloat the ship. Dredgers cleared nearly 30,000 cubic meters of sand and even removed part of the canal wall to free the ship’s jammed bow.

Hopes rose March 28 as the Ever Given moved toward a proper orientation with help from the high tides of the full moon. The next afternoon, the Suez Canal Authority declared victory as the ship was pulled from the canal wall around 3 p.m. Egypt time and towed toward the Great Bitter Lake, where it anchored for inspections and an investigation.

Around 8 p.m. March 29, Taiwanese cargo ship YM WISH restarted its engine after seven days of waiting and became the first vessel to enter the Suez Canal, marking the resumption of traffic after the longest closure in decades.

Yet the fallout from the incident is still unfolding as the focus shifts from the salvage operation to questions about what went wrong and who’s to blame.

Early reports suggested that high winds and poor visibility from a sandstorm were responsible for the incident, although investigations into the cause are still underway.

Shoei Kisen Kaisha Ltd., the Japanese owner of the Ever Given, issued an apology shortly after the incident. The owner and insurers could face claims totaling millions of dollars for the delays and extra costs accrued by other companies, Reuters reported.

A Shoei Kisen Kaisha representative was quoted by Agence France-Presse as saying the ship had an insurance policy, without giving details.

The Suez Canal Authority’s Chief Executive Officer Osama Rabie said Wednesday that the authority may seek around $1 billion in compensation. But he did not specify whom the authority would seek compensation from.

The figure is a rough estimate of lost transit fees, damage to the waterway during the dredging and salvage efforts, and the cost of equipment and labor, Rabie said.

The canal authority charged each vessel $300,000 to pass through the canal in 2020, when traffic totaled about 50 ships a day.

In addition to the canal authority’s losses, there are also expectations that owners of the goods aboard the Ever Given and other ships could also seek compensation for delays. There were $3.5 billion of cargo on the Ever Given as the ship anchored in the Great Bitter Lake

“There is almost no chance that we will be sought to pay compensation,” Evergreen Marine President Eric Hsieh said at a briefing in Taipei.

The ripple effects of the Suez blockage have started spreading.

“Delays of container ships from China to Europe and the East Coast of the U.S. will be severe throughout April, as most ships will miss their schedule by six to seven days,” a manager at the Yangshan port in Shanghai said Thursday.

Some cargo companies raised rates for the route between China and Europe through the Red Sea by $2,000 within the week of the blockage, according to a trading company representative. Costs for transport between China and the U.S. also increased by more than 40% amid a capacity shortage, he said.

Maersk said the Suez blockage will affect global supply chains. As a large number of ships were delayed, ports from Europe to Asia will soon be inundated as goods held up by the blockage arrive all at once or in quick succession, compressing normal operations and further stressing global shipping capacity. Maersk predicted that worldwide shipping capacity will decline by 20%–30% in the next few weeks because of the disruption.

The disruption spreads beyond container shipping to transport of oil, gas and commodities. Oil prices rose 6%, the most in four months, shortly after the incident, with benchmark West Texas Intermediate crude contracts topping $60 a barrel for May delivery. But the blockage’s impacts on the global oil market won’t last long as the Suez Canal handles only about 4% of crude transport, experts said.

The Suez blockage also sparked fresh safety concerns about the fleet of mega ships being built around the world. At 400 meters in length and 59 meters in width, the Ever Given is the biggest vessel allowed to use the Suez Canal.

The bigger the ship, the more difficult it can be to control, said Lu Yue, a pilot in the port of Shanghai. The huge size of a vessel causes larger blind spots and makes it more dangerous when it passes through narrow waterways like the Suez Canal, Lu said.

Container ships are growing ever larger as global trade expands and shippers seek greater efficiency. Built in 2018, the Ever Given can carry about 20,000 standard shipping containers, while the largest vessels being assembled today can handle 24,000.

There has long been criticism of the Suez Canal Authority’s handling of mega ships as some say the authority often turns a blind eye to giant ships that exceed the canal’s safety standards.