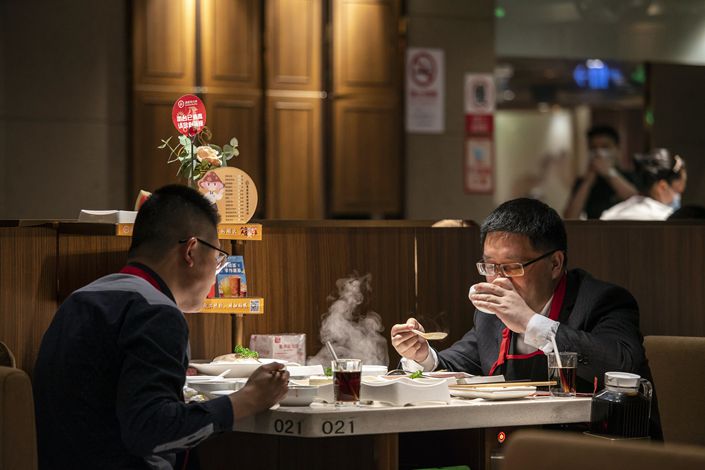 China reported the first rise in consumer prices this year and a bigger-than-expected increase in producer prices to the highest in almost three years in March, due to a low base and a rapid rise in energy and commodity prices, official data showed Friday.

The consumer price index (CPI), which measures changes in prices of a select basket of consumer goods and services, rose 0.4% year-on-year (link in Chinese) last month, reversing a 0.2% decline in February, National Bureau of Statistics (NBS) data showed. The CPI growth came in just ahead of the median estimate of a 0.3% rise (link in Chinese) by a Caixin survey of economists.

The consumer inflation rate in March was mainly driven by rising non-food prices, which grew 0.7% year-on-year, reversing a 0.2% decline the previous month. Prices of industrial consumer goods rose 1%, the first year-on-year increase in a year mainly due to surging gasoline and diesel prices, Dong Lijuan, a senior NBS statistician, said in a Friday statement (link in Chinese).

Food prices fell 0.7% year-on-year in March, compared with a 0.2% decline in the previous month. Amid increasing supply, pork prices, which were a primary contributor to China’s consumer inflation last year, fell 18.4% last month from a year earlier, accelerating from February’s 14.9% drop.

The Ministry of Agriculture and Rural Affairs expects pork supply to rise by 65% year-on-year in the first half of this year, and pork prices to weaken in April, according to its March 18 statement (link in Chinese).

The producer price index (PPI), which gauges changes in prices of goods circulated among manufacturers and mining companies, rose 4.4% year-on-year, accelerating from 1.7% growth in February, NBS data showed (link in Chinese). The figure is the highest since July 2018 and exceeds the median estimate of a 3.6% rise in the Caixin survey.

The jump in China’s factory gate prices was driven by a low base in March last year when much of the country locked down to control spread of the pandemic and an increase in global commodity prices, according to the NBS and multiple economists.

Fueled by rising global crude oil prices, petroleum product prices in the domestic market rose further, according to Dong. The prices of products from the oil and natural gas extraction industry rose 23.7% year-on-year, reversing a 6.4% decline in February.

In addition, the rising cost of imported iron ore and growing domestic demand in industrial production and investment have pushed up prices in the metals processing industries, Dong said.

Economists from Nomura International (Hong Kong) Ltd. forecast in a Friday note that China’s CPI and PPI would further rise 1.2% and 5.5%, respectively, year-on-year in April, on a low base and a rapid rise in prices of services, energy and commodities.

Despite rising concerns about inflationary pressures on China’s policy stance, multiple economists expect Beijing to stick to its “no sharp turns” commitment.

Falling pork prices mean consumer inflation will probably remain below 3% this year, the Nomura economists wrote in the note. In addition, the recent PPI rise was mainly the result of surging commodity prices outside China which are largely due to monetary easing and huge fiscal stimulus being rolled out by major economies, especially the U.S., they said.

Economists with Macquarie Capital Ltd. wrote in a Friday note that both the CPI and PPI will climb in the near term, but inflationary pressure is expected to ease in the second half of 2021 due to a higher base a year earlier.