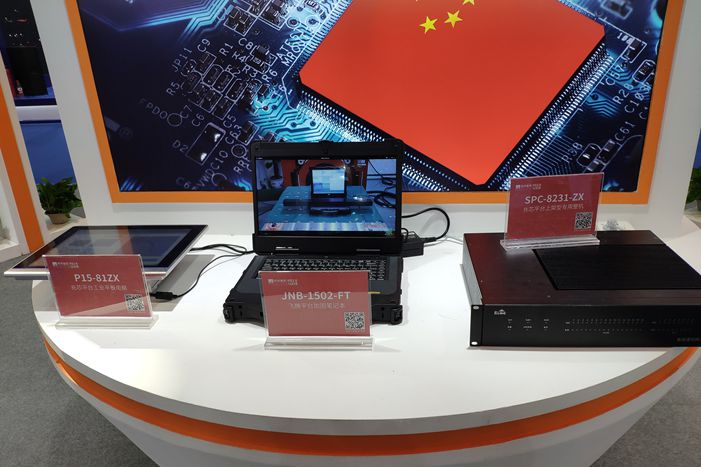 Phytium showcases one of its laptop models at an industry event in Shenzhen on November 2020. Photo: VCG

A unit of one of China’s early CPU pioneers is among seven supercomputing firms blacklisted by the U.S. in its latest strike on China’s technology sector.

The U.S. added the firms to a list of entities banned from receiving exports from American companies, citing activities contrary to U.S. national security or foreign policy interests.

In a statement Thursday, the Commerce Department said the newly blacklisted entities are involved with building supercomputers used by China’s military actors or its military modernization efforts or creation of weapons of mass destruction. American companies are barred from doing business with companies on the so-called entity list without first obtaining a U.S. government license.

“Supercomputing capabilities are vital for the development of many — perhaps almost all — modern weapons and national security systems, such as nuclear weapons and hypersonic weapons,” Commerce Secretary Gina Raimondo said in the statement. “The Department of Commerce will use the full extent of its authority to prevent China from leveraging U.S. technologies to support these destabilizing military modernization efforts.”

Thursday’s action doesn’t fully cut off the Chinese enterprises from U.S. technology. That differs from the action taken against Huawei Technologies Co., where the government applied the so-called foreign direct-product rule to restrict Huawei’s ability to use Taiwan Semiconductor Manufacturing Co. and others to fabricate their chips.

The Commerce Department’s move will not prevent Phytium from continuing to source from TSMC, a person familiar with the matter told Bloomberg.

A Phytium representative told Caixin that the company is accessing the impact from the Washington’s move to add it to the entity list and that it will soon release an official statement.

Phytium, the chipmaking unit of China’s state-owned technology conglomerate China Electronics Corp., is one of the earliest companies in China to develop CPUs. It reported a 650% surge in 2020 shipments of its homegrown processors, driven by rising domestic demand to replace imported chips.

In 2020, Phytium delivered 1.5 million of its CPUs, compared with 200,000 in 2019, the company said in December. About 80% of Phytium’s CPUs were delivered to government clients as local authorities across China accelerated construction of internet systems for public services and urban management.

Sunway Microelectronics, which was added to the entity list, is also a chipmaker that produces high-performance multi-core processors. The other five institutions added to the list are research institutions in the field of supercomputing and are nonprofit public institutions.