By Matthew Walsh, An Limin and Zheng Lichun 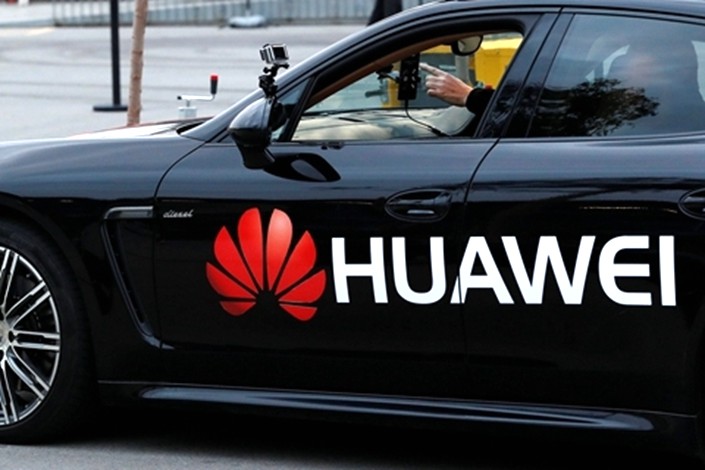 The first commercial passenger car fitted with an autonomous driving system developed by Huawei Technologies Co. Ltd. has gone into pre-order, cementing the firm’s push into the auto industry as it tries to cushion the impact of U.S. sanctions on its core smartphone business.

It came as the head of Huawei’s car unit announced it would invest $1 billion in automotive technology this year, placing it firmly among a group of Chinese tech giants, including smartphone-makers, drone manufacturers and internet platforms, pushing aggressively into an auto sector undergoing a historic shift toward increasingly autonomous, connected, and new-energy powered vehicles.

It also comes as Huawei grapples with the dual impact of a global semiconductor shortage and U.S. sanctions that have cut off its access to advanced chips. That has driven a precipitous decline in revenues, particularly in its mobile phone businesses, one of which it was forced to sell last year.

In a separate announcement on Sunday, Huawei said (link in Chinese) its high-precision mapping service would become commercially available by the end of the year. The technology is key for autonomous vehicles to position themselves on the road and capture peripheral data.

Liao Zhenqin, the general manager of the platform-as-a-service product department in Huawei’s cloud business unit, said the service would initially include China’s public highway network and the cities of Beijing, Shanghai, Guangzhou and Shenzhen, but would grow to include more than 20 cities by the end of next year.

Huawei this year will invest up to $1 billion in auto research and development (R&D) and will have more than 5,000 R&D personnel, over 2,000 of whom will focus on autonomous driving, said Wang Jun, the head of the company’s smart driving unit, in an interview Saturday.

He reiterated that Huawei does not intend to make the smart cars themselves, just the technology that powers them.

The Alpha S contains both hardware and software developed by the embattled tech titan, including an autonomous driving system complete with lidar and other sensors, a smart cabin that uses its Harmony operating system, and Kirin chipsets developed by its HiSilicon Technologies Co. Ltd. unit, according to promotional materials released by Arcfox.

Neither Huawei nor Arcfox said which autonomous driving level the Alpha S would use. However, people familiar with the matter told Caixin that Huawei initially plans to equip vehicles with “Level 4 capabilities,” meaning they could drive themselves under certain circumstances, but only “Level 2 responsibilities,” meaning that drivers would have to continue to operate and monitor the vehicles.

Car autonomy is ranked using a rubric developed by American engineering standards group SAE International. Level 5 is the highest level of automation, but no Level 5 vehicles are known to exist.

Arcfox has priced the basic Alpha S at 388,900 yuan ($59,999) and a higher-spec version at 429,900 yuan, and aims to deliver orders by the end of the year. The more expensive model features self-driving capabilities for urban roads, while the basic version features them only on highways, Wang said.

The company “might” sell the Alpha S in its flagship store following renovations, Wang added. In a rare move for the auto industry, the body of the Alpha S will feature Huawei’s “HI” logo, which stands for “Huawei Inside.”

Huawei’s expansion into the auto sector comes amid a global chip shortage fueled in part by carmakers competing with makers of consumer electronics for scarce semiconductors, a situation that stems from the catastrophic economic effects of the Covid-19 pandemic.

The controversial company has also suffered from U.S. government sanctions that have severed its access to supplies of advanced chips.

Huawei is far from China’s only Chinese tech firm to muscle into the car industry. Last week, SZ DJI Technology Co. Ltd., the world’s largest manufacturer of consumer drones, said it would take part in the Shanghai auto show this week, issuing a digital flyer that hinted at a foray into car systems development.

And in March, smartphone giant Xiaomi Corp. said it would invest $10 billion in electric vehicles over the next decade. The announcement came after internet search behemoth Baidu Inc. said it had embarked on a joint venture with domestic carmaker Zhejiang Geely Holding Group Co. Ltd. to produce smart EVs.