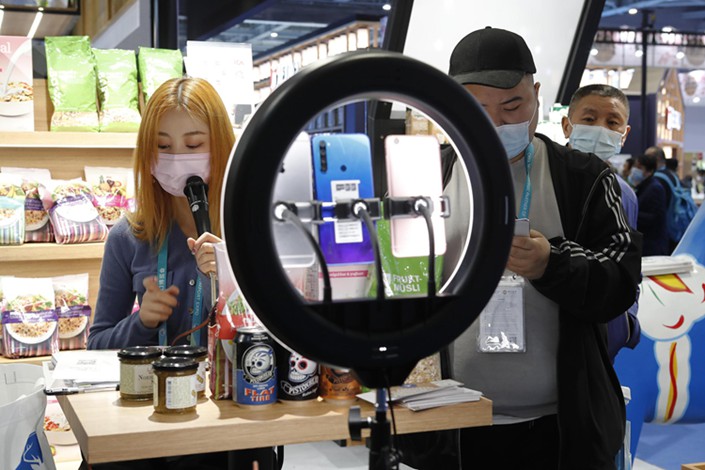 The guidelines (link in Chinese) consisted of four main points contained in a document published on the Cyberspace Administration of China’s website. The internet authority said it jointly developed the plan together with six other government agencies, including those involved in commerce, public security, culture and taxation.

The new trial guidelines “aim to regulate order in the internet market, protect people’s legitimate rights and interests, promote the healthy and orderly development of new forms of business, and create a clean cyberspace,” according to the announcement.

The kind of selling via livestreaming targeted by the new guidelines is similar to TV infomercials in the West, but reaches a much broader audience of anyone with internet access. The industry has created a new generation of online celebrities in China, and has also drawn in big business names like Lei Jun, CEO of smartphone major Xiaomi, and Dong Mingzhu, president of home-appliance giant Gree Electric.

One measure in the guidelines calls for platform operators, including the likes of recently listed Kuaishou Technology, to establish special registration systems for account holders who sell products over their channels, including a system for canceling accounts. The measure also called for the protection of minors and personal information — two common complaints often seen in the space.

Addressing similar issues, China’s National Radio and Television Administration last November unveiled new rules forcing livestreaming companies to cap the amount that users can spend on their favorite performers. Those rules were particularly targeted at minors who sometimes were spending large amount of their parents’ and other people’s money on tips and products being peddled by such performers.

Another item in the new guidelines called on people engaged in livestreaming selling to clearly define themselves as either livestreaming operators or studio personnel, and to clearly state age limits for their audiences and other red lines that viewers must observe.

A third item stressed the importance of protecting consumer rights. That particular issue was in focus at the end of last year when a raft of complaints emerged from people who had bought bird nests — a common local delicacy — on a livestreaming channel operated by a popular online celebrity known as Xinba, only to later discover the products were fakes.

A growing number of similar disputes has created a business opportunity for lawyers due to the complexity of the space. That side of the business was the subject of a white paper published by a Beijing court last August detailing the many places disputes can occur, while also emphasizing the importance of signing proper contracts to lessen the likelihood of such clashes.

The court in Beijing’s Chaoyang district broke down livestreaming into three basic activities: Gaming, shopping, and entertainment shows hosted by individuals, noting that hosted shows accounting for two-thirds of disputes it hears.

An earlier report from China’s internet regulator showed the country had 560 million users engaged in livestreaming through March 2020, up 41% from the previous year and encompassing nearly two-thirds of China’s internet users. Livestream gamers and shoppers totaled about 260 million users each, while users associated with livestreaming shows totaled 207 million, the report said.