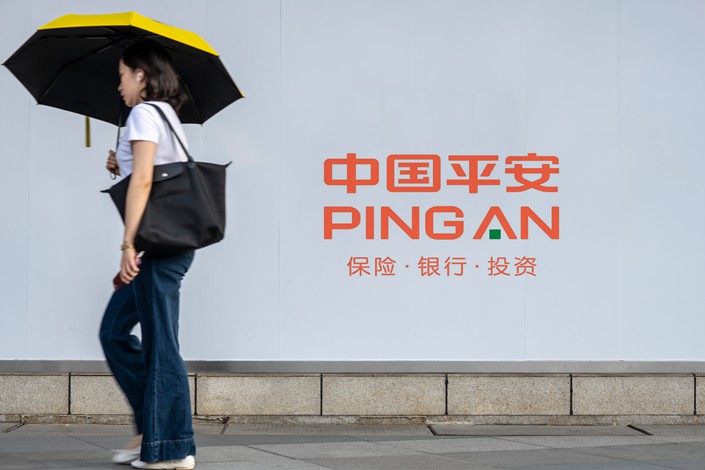 Ping An’s net profit attributable to shareholders grew 4.5% year-on-year to 27.2 billion yuan in the first three months of this year, according to the company’s unaudited financial results. Photo: IC Photo

Ping An Insurance (Group) Co. of China Ltd. (601318.SH), one of the country’s biggest insurers, reported muted growth in net profits in the first quarter despite the low base a year ago after setting aside a large sum of money to cushion potential losses from its exposure to a cash-strapped property developer.

Net profit attributable to shareholders of Ping An increased by 4.5% year-on-year to 27.2 billion yuan ($4.2 billion) in the first three months, according to the company’s unaudited financial results filed with the Hong Kong Stock Exchange on Thursday. That compared with a 102% increase in the previous quarter and about 8% in the third quarter last year.

“Ping An made provisions for impairment losses and adjusted the valuations of investments related to China Fortune Land Development in the first three months,” the company said in the filing. These amounted to 18.2 billion yuan and slashed 10 billion yuan, or a quarter, from its net profits, it said.

Ping An became China Fortune’s (600340.SH) second-largest shareholder in July 2018 (link in Chinese), when the developer’s liquidity problems worsened as regulators acted to curb excessive borrowing and speculation in the real estate sector.

As of Thursday, China Fortune had defaulted on a total of 47.8 billion yuan in principal and interest due to the economic and industry conditions coupled with the impact of the Covid-19 epidemic, according to a company filing (link in Chinese) to the Shanghai Stock Exchange.

Ping An said in February that it was exposed to risk in its investment in China Fortune amounting to 54 billion yuan, including 18 billion yuan in equity and 36 billion yuan in bonds. However, some have said the risk exposure could exceed 90 billion yuan (link in Chinese) considering off-balance-sheet investment.

As China’s recovery picked up pace with the nationwide rollout of the Covid-19 vaccination in the first quarter, Ping An’s traditional offline business gradually returned, according to its filing. However, as the domestic economic recovery is not yet solid, the impact on consumer demand and the company’s long-term insurance products lingers, it said.

Another leading insurer, China Life Insurance Co. Ltd. (601628.SH), expects its net profit to grow between 55% and 75% year-on-year in the first quarter, according to its unaudited preliminary financial results (link in Chinese) released Wednesday. The main reason for the growth was due to a surge in investment income, the company said.