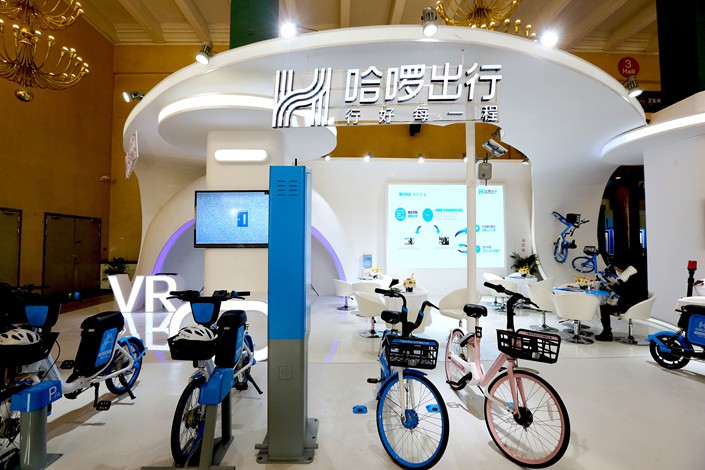 The company said that it has been subject to intense regulatory scrutiny from the state and municipal regulatory authorities in China. Photo: VCG

Chinese bike-sharing startup Hello Inc. has become the first major company in its class to launch an initial public offering, betting investors will buy into its growth story even as it continues reporting large but progressively shrinking losses.

Hello, backed by fintech giant Ant Group Co. Ltd., on Friday submitted its prospectus to the U.S. Securities and Exchange Commission for a proposed Nasdaq IPO with an initial fundraising target of $100 million, although that figure often goes up or down depending on investor demand. It did not say how it might use the proceeds.

However, risks remain in Hello’s local services as they are “highly regulated.”

If the Chinese government adopts or amends new rules, “our business, results of operations and financial condition could be materially and adversely affected,” Hello said in the prospectus.

The company said that it has been subject to intense regulatory scrutiny from the state and municipal regulatory authorities in China. In August 2017, the Ministry of Transport issued the first national guidelines for regulating bike-sharing services, and some cities have passed local rules to regulate the development and operation of shared two-wheeler services, according to the prospectus.

In October 2017, Youon Bike signed an agreement to combine its bike-sharing unit with Hello, which was known as Hellobike at the time, and later in December 2017, Ant Group poured investment into Hellobike and became its largest shareholder.

Hello is one of the few companies to survive China’s bike-sharing bubble, which resulted in vast “bicycle graveyards” of abandoned bikes in many cities. For example, Mobike, a top player in the bike-sharing sector, has changed its name to Meituan Bike after Chinese lifestyle service and food delivery giant Meituan acquired it for $2.7 billion in April 2018. Meituan Bike’s services are now only available on Meituan’s platforms.

Ofo, which like Hello, was founded in 2014 and also received heavy financial backing from an Alibaba subsidiary, rose to be valued as much as $3 billion at its peak before nearly ending up in bankruptcy in 2019.

In 2020, Hello recorded 6 billion yuan in revenue, up 25.3% year-on-year, as it said in the prospectus that it has gradually recovered from the impact of the Covid-19 epidemic in the second half of last year. Cycling returned to favor in China as people avoided public transport at the height of the pandemic last year.