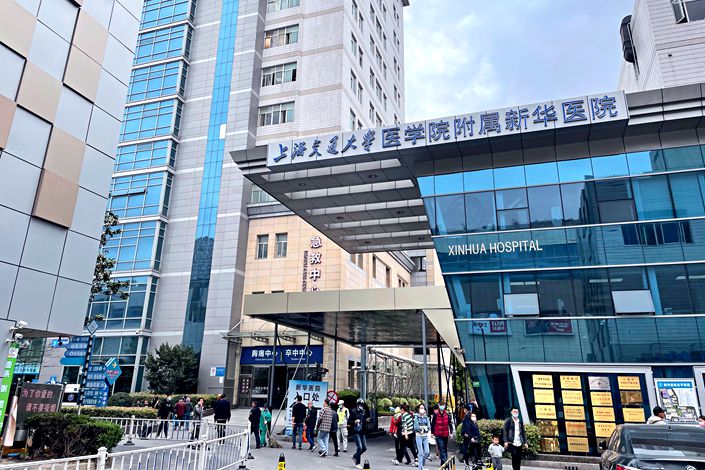 Lu Wei, deputy chief physician in general surgery at the Xinhua Hospital Affiliated to Shanghai Jiao Tong University School of Medicine, has been suspended from duty and is now under investigation for malpractice. Photo: Xu Wen/Caixin

A Caixin investigation has uncovered new allegations about a Shanghai-based doctor’s cancer treatments, including alleged inducement of a patient to take an unapproved therapy without warning of the potential risks.

The doctor, Lu Wei, deputy chief physician in general surgery at Xinhua Hospital Affiliated to Shanghai Jiao Tong University School of Medicine, has been suspended from duty and is now under investigation for malpractice, Caixin has learned.

Lu’s case has sparked wide-ranging debate as Chinese health authorities continue their investigation into his work.

Lu’s use of an unapproved cancer therapy has been alleged by Ma Rong, the daughter of one of the patients who received the treatment at a company Lu recommended and died on Dec. 24. She told Caixin that both Lu and the company’s staff tried to contact her through her family member after the investigation was launched into the practice. They said they would refund the treatment cost and hoped she could stop pursuing the matter, but she refused, Ma said.

Lu is suspected of deceiving Ma’s father, who was diagnosed with advanced gastric cancer, into take the unapproved therapy at a cost of 30,000 yuan ($4634) per injection.

Ma insisted that Lu recommended her father take the “natural killer” (NK) cell-based cancer immunotherapy. According to a recording provided by Ma and heard by Caixin, Lu said in a conversation that the NK cell therapy could help her father’s treatment and get positive results, especially as “his own immunity is insufficient.”

However, Lu claimed that he didn’t suggest the therapy on his own initiative and said Ma’s relative, surnamed Zhang, had previously made contact to ask if he could help carry it out.

Caixin has found that Zhang said in an interview with Yixuejie, a Chinese medical publisher, that he heard about the treatment from another cancer patient who had received courses of chemotherapy with Ma’s father. But Zhang’s claim was rejected by Ma, who said “he was lying, he told me Lu recommended the NK needle to him.”

The second issue in the case involves Shanghai Jiakang Bioengineering Co. Ltd., which allegedly administered the NK therapy to Ma’s father and is believed to have business links to Lu.

Ma told Caixin that during her father’s treatment, no staff at Shanghai Jiakang advised him if it was a clinical trial or not. They didn’t inform them about the risks of treatment and asked them to sign a consent form, she said, which contravened China’s current regulations related to cellular immunotherapy.

As Caxin previously learned, Lu was a shareholder of Shanghai Bokang Biotechnology Co. Ltd., whose legal representative Xu Yibing also represents Shanghai Jiakang, before he withdrew in 2015. However, Lu told Caixin that he became a shareholder under a situation of which he was unaware.

“Xu let me join his company in the name of doing research,” Lu said, adding that their cooperation didn’t continue because Xu found a more suitable research partner. He also said he did not remember withdrawing as a shareholder. Caixin has received no response from Xu.

According to company documents seen by Caixin, Shanghai Bokang was registered and established in 2014 with Lu’s handwritten name added as being a shareholder. Another document related to a personnel change in 2015 also shows Lu’s handwritten signature.

Further to Ma’s claims against Lu, she also mentioned an out-of-hospital chemotherapy experience her father had.

Although Lu said it was the only time Ma’s father had chemotherapy outside the Xinhua hospital, a hospital staff member confirmed to Caixin that it did not allow this kind of medical treatment.

The third issue is the question of whether the genetic treatment method used by Lu can effectively be used for cancer patients.

Despite questions about Lu’s motive to recommend his cancer patients have their genomes sequenced and do genetic tests at a small company, Lu said his motivation was to avoid ineffective treatment of his patients and he was not paid a commission.

This is also backed up by Xin Liang, a professor at a hospital affiliated to Harvard Medical School, who said the genetic sequencing would help develop a treatment plan, although the effects were limited.

Other questions have also been raised about Lu’s treatment plans.

Last month, online whistleblower Zhang Yu, who identified himself as an oncologist at Peking University Third Hospital in Beijing, accused Lu in his online posts of using improper drugs such as pemetrexed and anlotinib to treat gastric cancer patients.

“The instructions didn’t say the drugs could treat gastric cancer, let alone provide guidelines about how to use them for the treatment of gastric cancer,” Zhang said.

However, Lu told Caixin that although the drugs gave no guidelines, a number of reports in the country have proved that they could be used in cancer treatment with positive effects.

The National Health Commission on April 27 announced initial results of the ongoing investigation into Lu, saying the treatment process was “basically compliant” with the law and regulations.