By Zhao Xuan and Matthew Walsh 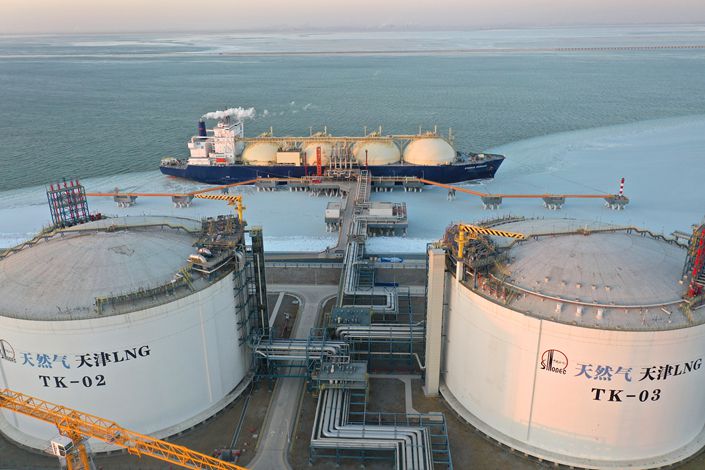 China Petroleum & Chemical Corp. (600028.SH/0386.HK) plans to invest 200 billion yuan ($30.9 billion) over the next five years to double the size of its natural gas business, as the country’s energy giants look to bring themselves in line with national climate goals.

The state-owned company — also known as Sinopec — aims to set up a new gas subsidiary and increase its overall gas trading volume to 100 billion cubic meters by 2025, up from 44.5 billion cubic meters last year, according to Mou Haiyong, the chief engineer of the company’s existing gas branch.

While burning gas still produces carbon emissions, it does so in lower quantities than other fossil fuels like coal and oil. Energy companies argue that gas is a good way to reduce emissions in the short term, pending a larger shift toward zero-carbon energy.

Shanghai- and New York-listed Sinopec aims to have 10 liquefied natural gas (LNG) projects underway by 2025, with a total receiving capacity of nearly 40 million tons per year, a nearly threefold rise on its current interests, Mou said.

He added that the company will also extend its network of feeder pipelines to 8,787 kilometers over the same period, some 5.5 times its current length.

Competition for downstream sales of oil and gas products has intensified since the creation last year of China Oil & Gas Network Corp., also known as PipeChina, which saw the Asian nation’s energy majors hand over much of their pipeline networks to a new national carrier.

The move landed Sinopec with a 14% stake in the new pipeline giant but unable to generate profit from its own conveyance network. “The challenges for us have become bigger and bigger,” said Wang Jinjun, the general manager and Communist Party secretary of a Sinopec gas subsidiary based in the eastern province of Shandong.

Unable to rely on pipelines, gas companies are vying to snap up customers at LNG terminals, Wang said. The terminals store and process LNG prior to import or export.

While officials said Sinopec had managed its pivot to terminals well, the firm is also battling an upstream production squeeze that is making it more reliant on imports, said Xi Haihong, an official in the sales management department of the company’s main gas branch.

Sinopec produced 1.1 trillion cubic feet of natural gas last year, up 2.3% from 2019, according to its annual report. Last month, the company announced a quarterly net profit of $2.8 billion, reversing losses made during the equivalent period of last year when China’s Covid-19 outbreak forced production suspensions and a collapse in demand.

By comparison, rival PetroChina Co. Ltd. (601857.SH/00857.HK/NYSE: PTR) produced nearly 4 trillion cubic feet, a year-on-year rise of about 10%, according to its annual report. PetroChina also sold around four times as much gas in the domestic market as Sinopec.

The company said in March that gas will account for about 55% of its portfolio by 2025, up from 43% last year. It also swung back to profit in the first quarter, posting net gains of $4.3 billion.