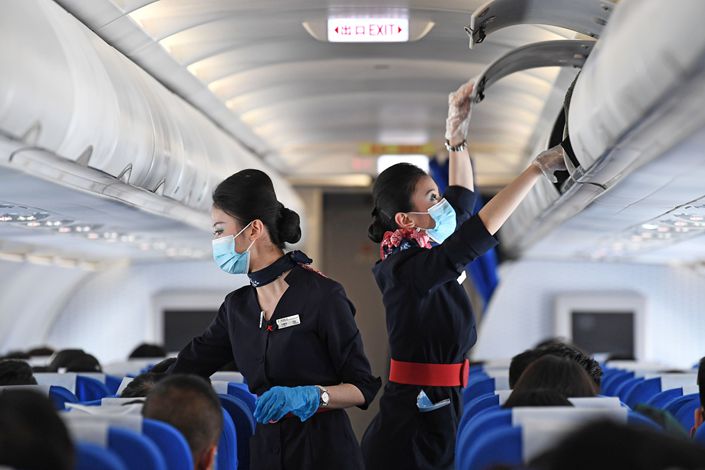 An attendant checks the overhead bins on a flight in Hefei, East China's Anhui Province, on March 2. Photo: VCG

China’s services sector expanded at the fastest rate in five months in April, as new business saw strong growth both at home and abroad, a Caixin-sponsored survey showed Friday.

The Caixin China General Services Business Activity Index, which gives an independent snapshot of operating conditions in the services sector, rose to 56.3 in April from 54.3 the previous month.

A number above 50 indicates an expansion in activity, while a figure below that points to a contraction. The index, better known as the Caixin China services PMI, shows that services activity has expanded for 12 straight months.

The indicator is closely watched by investors as one of the earliest available monthly barometers of the health of the world’s second-largest economy. The increase in the Caixin services PMI follows the acceleration in manufacturing activity expansion recorded in the April Caixin China manufacturing PMI released last week, which rose to 51.9 from 50.6.

Overall, the Caixin China General Composite PMI, which covers both the manufacturing and services sectors, rose to 54.7 from 53.1 in March, according to the Friday survey report.

The breakdown of the April services PMI showed that total new business rose at the quickest clip since November, driven by a further improvement in demand both at home and abroad, according to the survey. The gauge for new export business broke into expansionary territory in April after contracting for two months in a row.

As a result, service providers continued to hire more staff, with the rate of job creation recording its fastest level in five months. Outstanding businesses dropped in April from the previous month.

Service providers’ input costs increased at a faster rate in April than the previous month, marking an expansion for the 10th month in a row amid rising raw material prices and demand-driven higher labor costs. To ease the pressure of higher costs, service companies raised the prices they charged customers.

Service enterprises were still strongly optimistic about their prospects, though the measure for business expectations dropped slightly from March’s 10-year high. Service companies widely expected that customer demand will continue to recover from the impact of the pandemic, according to the survey.

The upbeat PMI readings add to evidence that the economy continues to recover in the post-epidemic period. China’s GDP grew 18.3% year-on-year in the first quarter of 2021 on a low comparison base, accelerating from 6.5% growth in the previous quarter.

China’s official services PMI, released by the National Bureau of Statistics last week, fell to 54.4 (link in Chinese) in April from 55.2 the previous month.