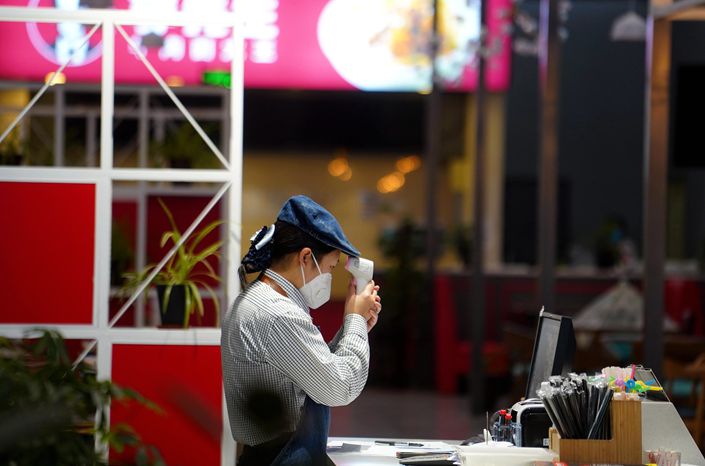 A worker takes his temperature at a store in Chengdu East Railway Station in Chengdu, capital of southwest China's Sichuan province, on Jan. 31, 2020. Photo: VCG

China’s services sector expanded at the fastest pace in three months in March as companies’ optimism jumped to a 10-year peak, a Caixin-sponsored survey showed Tuesday.

The Caixin China General Services Business Activity Index, which gives an independent snapshot of operating conditions in the services sector, rose to 54.3 in March from 51.5 the previous month.

A number above 50 indicates an expansion in activity, while a figure below that points to a contraction. The index, better known as the Caixin China services PMI, shows that services activity has expanded for 11 straight months.

Total new business in the services sector rose at the quickest pace in three months in March, although new export business continued to fall. That suggested the increase in total new business was mainly driven by stronger domestic demand, the survey said. The ongoing Covid-19 pandemic continued to dampen new orders from overseas, some surveyed companies said.

An increase in total new orders led to greater pressure on service enterprises’ capacities, with outstanding business rising for the first time in five months in March. That prompted service firms to add their staffing levels, with the measure for employment bouncing back into expansionary territory last month.

Inflationary pressure increased as input costs rose for the ninth consecutive month in March, though at a slower pace than in the previous month. The rise in costs was due to a variety of factors, including higher prices for raw materials and labor, surveyed companies said. To alleviate pressure from rising costs, service enterprises raised their prices at the steepest pace in three months.

Service providers remained optimistic about their prospects, with the measure for business expectations hitting the highest point since February 2011 last month. Some companies projected more normal business conditions and a further recovery in market demand once the pandemic ends, according to the survey.

China’s official services PMI, released by the National Bureau of Statistics on Wednesday, rose to 55.2 (link in Chinese) in March from 50.8 the previous month.

“(T)he economy continued to recover from the epidemic. Supply and demand in the manufacturing and services sectors remained in expansionary territory, though at different paces due to the end of the Covid-19 flare-ups in the fall and the winter,” said Wang Zhe, senior economist at Caixin Insight Group.

More attention needs to be paid to inflation going forward, as growing inflationary pressure has restricted the room for future policy changes and is not conducive to a sustained post-epidemic economic recovery, Wang said.

China will report its first quarter GDP on April 16. Economists with Macquarie Capital Ltd. expected first quarter GDP will record an 18% year-on-year rise, according to a research note released on Wednesday. The economists also expected China’s overall policy stance to continue avoiding sharp turns after the April Politburo meeting that will follow the release of the first quarter GDP.