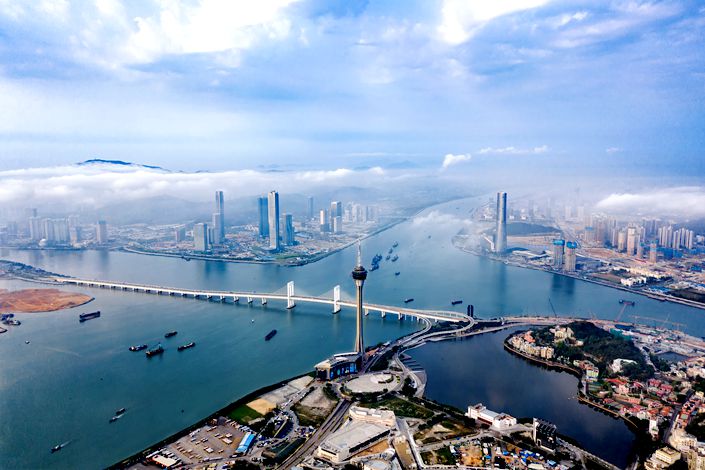 Draft regulations released this week outline plans to allow residents of a southern economic powerhouse now taking shape to invest as much as 1 million yuan ($154,800) in cross-border wealth management products through a connect program.

The cross-boundary wealth management connect (WMC) pilot program will allow residents of Chinese mainland cities in the Guangdong-Hong Kong-Macao Greater Bay Area (GBA) to invest in certain wealth management products sold by banking institutions in Hong Kong and Macao. Residents of the two special administrative regions will be able to invest in eligible products distributed by mainland banking institutions in the GBA.

In the Chinese context, cross-border investments include those from the mainland to Hong Kong, Macao and Taiwan, and vice versa.

The cap on an individual’s investment through the program is set at 1 million yuan. The draft regulations stipulate that neither the total net inflow of funds from Hong Kong and Macao to the mainland nor the net outflow from the mainland shall exceed 150 billion yuan.

The draft (link in Chinese) was jointly released Thursday by Guangdong branches of the central bank, the top banking and insurance regulator, and the securities regulator. It is open for public comment until May 21.

It’s unclear when the pilot program will launch, though a mainland central bank official has said it will kick off once people can travel freely between the three areas again as Covid-related travel restrictions are lifted.

Here are four important things to know about the program.

According to the draft, mainland residents of the nine Guangdong cities in the GBA can participate. Those residents should either have household registration, or “hukou,” in those cities or have paid for social insurance or personal income tax in the cities for five consecutive years.

The requirements for Hong Kong and Macao investors to engage in the WMC program are yet to be announced by local regulators.

Qualified mainland investors have to open a remittance account at a mainland bank involved in the program and use that account to remit funds to an investment account at a partnering Hong Kong or Macao bank that sells the desired wealth management products.

The mainland bank can help mainland investors to open the offshore investment account on behalf of the other bank, so investors don’t have to cross the border to do it in person. The mainland bank is responsible for ensuring that the two accounts are opened by the same person.

Funds under the program will be settled in the yuan in a closed loop, preventing capital outflows. This will be achieved through the bundling of the designated remittance and investment accounts to make sure the funds can only be used to invest in qualified products.

Hong Kong or Macao investors, however, will have to travel to the mainland to open their investment accounts in person. Hong Kong Monetary Authority Chief Executive Eddie Yue told Caixin in an interview in March that mainland regulators are reluctant to allow Hong Kong residents to open mainland WMC accounts remotely due to concerns about investor protection. He said the authority, Hong Kong’s de facto central bank, hopes that the account opening procedures can be simplified in the future.

What products are included?

It is still unclear what kinds of wealth management products will be available for mainland investors. Yue said last year that the eligible products will mainly be relatively low-risk at first, as for many it will be their first time engaging in cross-border investments.

The draft regulations stipulate that Hong Kong and Macao residents can invest in certain wealth management products with low- and medium-risk levels. Mainland banks are not allowed to guarantee there will be no loss of principal.

What aren’t investors allowed to do?

Investors are not allowed to use the wealth management products as collateral, according to the draft. They are also banned from using funds raised from other people to invest in the products.

Investors are forbidden from providing false information to the banks or concealing crucial facts, and using the program to launder money, finance terrorism or evade tax. Mainland, Hong Kong and Macao investors would lose the right to buy the products through the WMC program if they break the rules, either temporarily or permanently.