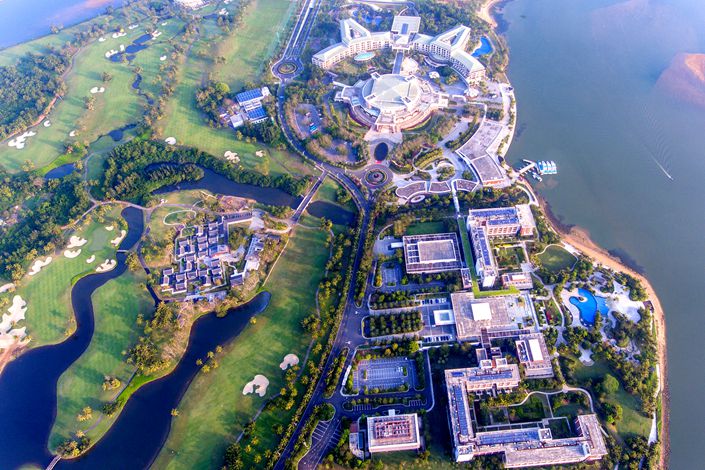 Spring in China is usually heavy with conferences. After the Two Sessions, there is usually the China Development Forum in Beijing and the Boao Forum in tropical Hainan province, from which China watchers can catch many policy signals. We’ve collected views and insights from the Boao Forum in late April, especially points on financial opening, digital currency and financial support for carbon neutrality, in a special briefing for our readers. The original comments were mostly made in Chinese, and they have been translated and edited for clarity.

China’s financial opening has two components in the area of capital markets. One is opening up to financial institutions, such as Goldman Sachs, to enter the market; the other is basic opening to overseas investors, through QFII and the Shanghai-Hong Kong and Shenzhen-Hong Kong stock connect programs.

• With the increase of foreign investment’s holdings in recent years, our stock market became much better. One reason is the growing role of foreign capital in pricing.

• The CSRC attaches great importance to the stability of China’s stock market, and takes good precautions. For example, for the Shanghai-Hong Kong and Shenzhen-Hong Kong stock connect programs, we have maintained a daily quota of 50 billion yuan in and 42 billion yuan out. When the stock connect programs were designed, it was stipulated that if a certain foreign capital caused large fluctuations in the stock market, its trading could be suspended temporarily. The CSRC has the means to prevent the large inflow and outflow of foreign capital causing market instability.

○ Foreign retail investors, which make up a small share, will not affect China’s financial stability.

○ Foreign mutual funds, pension funds and insurance companies, engaged in global asset allocation; they can stabilize the market and position for the long term. They are very welcome and the largest proportion of positions held today.

○ Foreign brokers with hedge funds’ backing, these could be our concern.

U.S.-listed Chinese companies currently face audit supervision problems. The CSRC considers the requests made by the Public Company Accounting Oversight Board (PCAOB) perfectly reasonable, since Chinese companies are listed in the United States, they must abide by American rules. We should find a way for the PCAOB to inspect Chinese accounting firms, and do so in a manner that meets China’s national security requirements.

• The CSRC and the PCAOB had been working together for at least four or five years, and I have always been personally in charge of this subject. There was a great deal of progress, and then the political climate in the United States shifted greatly. As a result, cooperation with China declined.

• The CSRC provided the latest proposal on Aug. 4, 2020, to satisfy the PCAOB’s requirement with a joint inspection, but unfortunately because of the political atmosphere, they have not responded to any of email inquiries we sent monthly since August last year. Besides, the U.S. has rolled out some regulatory measures, such as mandatory delisting. In my opinion, this is not a cooperative attitude.

• The CSRC hopes that the new U.S. administration will refocus on Sino-U.S. financial cooperation, which is in the interest of the U.S. and is what many financial institutions such as Goldman Sachs are looking for as well.

From Zhou Xiaochuan, vice chairman of Boao Forum for Asia and former governor of the PBOC

• Currently, the central bank’s priority in developing the digital yuan remains upgrading its retail system. The development of the digital yuan initially targets China’s vast retail market, rather than using it for cross-border transactions, as improving retail system efficiency is the basis for developing all other businesses including the wholesale system and cross-border payments.

• Both digital currencies and digital assets should serve the real economy. Cryptocurrencies are still in the early stages of development, and it remains to be seen whether they can better act as investment alternatives.

• Cross-border payments via central bank digital currencies (CBDCs) are very complex. Given that every country has its own macro-control situations and monetary sovereignty, certain foreign exchange controls cannot be easily removed, meaning there will be no trend towards monetary integration in the short term. However, with respect to the monetary sovereignty of central banks, digital technology can still be used to greatly improve convenience.

• The potential of cross-border use of the digital yuan will mainly depend on the Chinese currency’s global status, which would be determined by China’s economy, currency stability and convertibility. It also depends on market choice. Global market participants will compare and choose the best among different currencies.

○ China’s CBDC will not have a major impact on global financial markets as its use in cross-border payments is currently found mainly in small retail operations.

• There are strengths and weaknesses of yuan internationalization when it is compared to U.S. dollar

○ Strengths: China is the world’s second-largest economy. In addition to the sound development of trade and modern service industries, China also has a large number of outbound tourism consumers, many countries therefore attach great importance to Chinese consumers.

○ Weaknesses: The yuan still trails behind the U.S. dollar in terms of convertibility and free use. However, as China’s economic and trade status continues to rise, so will the status of the currency.

• Hong Kong residents will be able to use the digital yuan without any obstacles, and digital development will bring more convenience in the future. The PBOC and the Hong Kong Monetary Authority are studying cross-border payments using digital yuan, with technical testing already underway.

From Li Bo (李波), deputy governor of the PBOC

There is no specific timetable for digital yuan’s official rollout, but the PBOC is considering launching trials in more cities and having them cover more usage scenarios to enhance its ecosystem. Meanwhile, the PBOC is studying regulatory rules for Bitcoin and Stablecoins. If any type of Stablecoin is to become a widely-used instrument for payment in the future, it must be subject to strict oversight like financial institutions.

○ The central bank could try a hybrid system. The digital yuan can be linked to both the banking system and the token system. This way, it has different degrees of coupling in different technical solutions.

○ Increasing the number of trials and expanding its scope. China is trying to make it possible for foreign athletes and visitors to use its digital currency during the Beijing Winter Olympics in 2022.

○ Boosting the infrastructure for the yuan’s digitalization to improve the security and reliability of the system.

○ Setting up a set of legal and regulatory frameworks to monitor relevant businesses.

• Yuan internationalization is a natural process that does not aim to replace the U.S. dollar or any other currency, but let the market make choices and facilitate international trade and investment. The PBOC has joined the Multiple Central Bank Digital Currency (mCBDC), and it will cooperate with global partners to work out a cross-border payment solution for digital currencies over time.

• China considers crypto assets like Bitcoin and Stablecoins as investment alternatives and highlights the need for a better regulatory environment for such assets. If any type of Stablecoin is to become a widely-used instrument for payment in the future, it must be subject to strict oversight like financial institutions. But before the launch of any regulatory measures, regulators will maintain what they are doing right now.

From Yi Gang (易纲), governor of the People’s Bank of China (PBOC)

• First, we need to mobilize funds to support low-carbon transformation:

○ The central bank set standards for green bonds and green credit in 2015 and 2018, respectively, and completed a catalogue of green bond projects.

○ Build incentives. Green bonds and green credits have been included in the pool of eligible collateral facilitated by the central bank. In addition to creating emission reduction support tools, the central bank will increase support for green finance and carbon reduction through commercial bank ratings, deposit insurance rates and macro-prudential assessments.

• Second, we must manage the financial risks associated with climate change

○ The central bank will assess the impact of climate change on financial stability and monetary policy in a timely manner and study the key strategies for financial institutions to systematically consider climate change when conducting stress tests.

○ The central bank will also continue to increase the allocation of green bonds in its foreign exchange reserves, curb investment in high-carbon assets and incorporate climate factors into its investment risk management framework.

• Third, we must strengthen international coordination and cooperation

○ There is a wide demand and broad consensus in Asia on green transformation. Major economies have taken positive actions and cooperation at the regional level is progressing in an orderly way.

• There are still some problems in the development of green finance. For example, the price of some assets does not fully reflect the negative externalities on the environment.

○ The environmental information of some enterprises is not effectively disclosed.

○ Many industries have not incorporated carbon pricing in their work.

• Looking overseas, the CDB has a loan balance of more than $70 billion in Asia, and more than $160 billion along the Belt and Road and in co-founding countries.

Role of sustainable finance in the Belt and Road Initiative

• The latest progress in the Belt and Road:

○ Trade volume between China and the countries along the route has steadily increased, accounting for an increasing proportion of the total foreign trade of the whole country.

○ Global cross-border investment experienced some decline due to the Covid-19 pandemic; however, Belt and Road investment saw stable growth.

○ The new contracts China signed with foreign countries last year were mainly with countries along the Belt and Road.

○ China has signed free trade agreements and established working groups on investment, trade in services and e-commerce cooperation mechanisms with a number of Belt and Road countries.

○ China and the countries along the route have built a lot of green infrastructure since the Belt and Road was proposed in 2013.

• Next, China will focus the following tasks:

○ Promoting green and low-carbon energy in markets along the Belt and Road, balancing local demand and sustainable development.

○ Integrating the green development concept into the whole process of outbound investment and overseas cooperation.

▪ Participating in the G-20’s initiative to postpone the debt repayment of the poorest countries.

▪ Strengthening cooperation with other parties to address the debt vulnerabilities of heavily indebted poor countries.