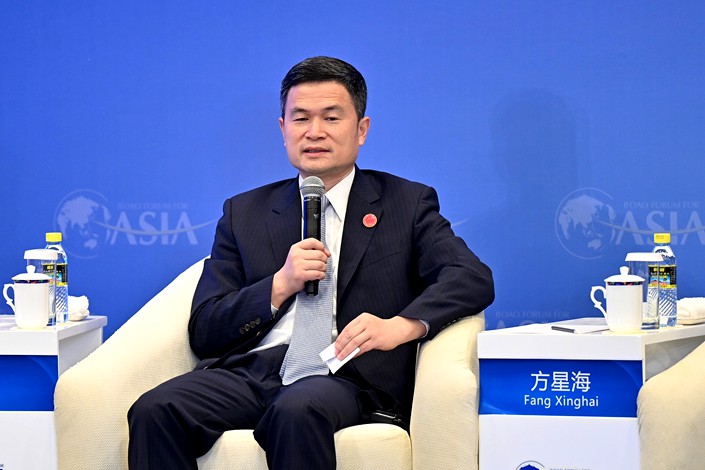 China’s financial authorities are closely monitoring flows of overseas capital into and out of the mainland stock markets and are confident they can maintain market stability in the event of any sudden large movements of funds, a senior regulatory official said Monday.

The China Securities Regulatory Commission (CSRC) is capable of preventing volatility in domestic markets that may be triggered by large capital inflows and outflows, Fang Xinghai, a vice chairman of the watchdog, said during a panel discussion at the annual Boao Forum for Asia taking place on the southern island province of Hainan.

The CSRC does have the power to suspend the trading accounts of foreign investors if it finds they have caused significant fluctuations in the stock market, he said, citing regulations that govern the stock connect programs linking the Hong Kong stock market with those in Shanghai and Shenzhen.

Fang’s comments follow concern by China’s policymakers about the potentially disruptive impact on domestic capital markets stemming from increasing overseas capital inflows, which include funds from Hong Kong, Macao and Taiwan. Investment has been flooding into the markets since 2018 as foreign institutions increase their holdings of Chinese mainland-traded A-share stocks and bonds in the wake of their inclusion in benchmark global indexes such as the MSCI and FTSE Russell indexes. Overseas funds are also entering the markets as a result of the expansion of the stock and bond connect programs that allow investors to trade mainland-listed securities through Hong Kong.

China’s strong economic recovery from the Covid-19 pandemic and the higher interest rates available on Chinese government bonds compared with developed markets including the U.S. have also boosted the mainland’s attractiveness as an investment destination.

Fang listed three kinds of overseas capital flowing into mainland markets. The first, money from retail investors, is relatively small and will not affect domestic financial stability. The second, and largest, proportion comprises overseas funds engaged in global asset allocation including mutual funds, pension funds and insurance companies, he said, which the CSRC welcomes. But it’s the third type, in the form of funds from the proprietary businesses of overseas brokerages and ultimately backed by hedge funds, that is of concern to regulators, he added.

Traditionally, China’s stock markets have been dominated by millions of domestic retail investors and lacked a strong core of institutional investors who were focused on value-based investing. Fang said the entry of foreign investors has made up for this shortcoming.

China recognizes the positive impact of overseas capital on the mainland market, Fang said. The increasing volume of overseas funds over the past few years has helped the market run more smoothly because it has played an increasingly important role in market pricing, he said.

The liberalization and marketization of China’s capital markets have encouraged the participation of international investors, John Waldron, president and chief operating officer of The Goldman Sachs Group Inc., said at the same panel discussion. More and more funds have been allocated to the Chinese market because the world has seen the benefits brought about by China’s economic growth, he said.

Fang also addressed the long-running dispute with U.S. regulators who are demanding that their accounting watchdog be allowed to review the financial audits of Chinese mainland companies listed on American stock exchanges.

Chinese and American financial regulators should advance their cooperation and it is normal that problems will arise, he said, pointing to the disagreement over audit supervision of Chinese companies listed in the U.S. He said the CSRC has agreed with the requirement set by the Public Company Accounting Oversight Board (PCAOB) that it be allowed to inspect Chinese accounting firms, but the U.S. side in turn needs to abide by China’s rules and comply with its requirements on national security and information security.

He pointed out that the PCAOB had failed to respond to a proposal put forward by the CSRC in August 2020 on cross-border joint supervision of accounting firms, despite monthly emails from the Chinese regulator seeking a reply.

The U.S. Securities and Exchange Commission said in March it would start to implement a law passed in December, the Holding Foreign Companies Accountable Act, that could lead to Chinese companies being kicked off the country’s stock exchanges. The regulator said it was taking initial steps to force accounting firms to let U.S. regulators review the financial audits of overseas companies. Any business that doesn’t allow their audit to be inspected for three years faces ejection from the New York Stock Exchange or Nasdaq.

U.S. lawmakers have said China’s refusal to allow such inspections risks exposing investors to fraud and that Chinese companies should not be permitted to raise money in the U.S. unless they comply with American rules. Regulators have become increasingly frustrated that they are unable to examine their books to help prevent the kind of fraud that left shareholders of Luckin Coffee Inc. nursing billions of dollars in losses.