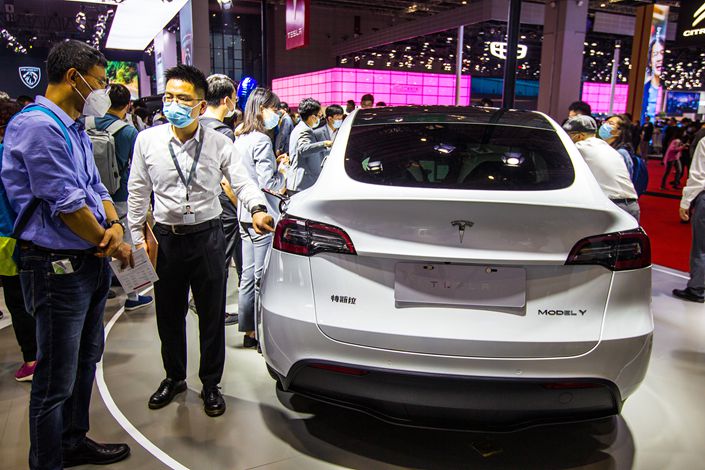 Tesla Inc.’s car sales in China fell by more than a quarter in April from their record high in March, as the new-energy vehicle (NEV) pioneer battled the fallout of a public relations gaffe and increased regulatory scrutiny.

The slump was steeper than the 12% month-on-month decline in NEV sales in the world’s largest car market in April, which was partly caused by there being fewer working days than March, according to a monthly report (link in Chinese) by the China Passenger Car Association (CPCA), an industry group.

Sales of Tesla’s Model Y wobbled last month amid unverified reports that the automaker’s Shanghai factory suspended production for two weeks for equipment upgrades, a decision that would likely have affected new vehicle deliveries. Tesla did not respond to Caixin’s requests for comment by the time of publication.

The Elon Musk-headed carmaker has had a tough few weeks in China. Beijing took the rare step of reprimanding the Nasdaq-listed carmaker for its response to a protestor at last month’s Shanghai auto show, and has reportedly also banned its cars from military complexes amid data concerns.

According to the CPCA, Tesla sold 25,845 vehicles in China in April, representing a 27% decline on the equivalent figure for March, when the firm notched a monthly sales record.

Nationwide, the total number of passenger vehicles sold last month fell by 8.3% from March, while luxury car sales shrank by 7%.

Last month, two Chinese government entities slammed the company’s behavior in a single day, prompting it to apologize for its treatment of certain customers.

The slapdown followed a widely publicized incident at Auto Shanghai 2021, one of China’s two biggest car fairs, when a protestor climbed on top of a Tesla exhibit and loudly alleged that the company’s cars had safety issues.

Last week, Tesla pledged to develop a database allowing its customers in China to view data generated by their cars, adding that the tool will be available by the end of the year.

Back in March, Bloomberg News reported that the Chinese military had banned Tesla cars from its complexes and housing compounds out of concerns that the vehicles’ cameras were collecting sensitive data in ways outside government control. A few weeks later, the company promised to store any data gathered in China within the country’s borders.

Tesla’s share price has trended downward in recent weeks. The automaker’s latest quarterly earnings report, published late last month, showed that its record-breaking revenue and shipments during the first three months of the year were buttressed by regulatory credits and a one-time bitcoin selloff.

The company’s shares closed down 6.44% at $629.04 on Tuesday despite an afternoon rally that saw technology stocks recoup most of their dramatic losses from the start of the day.