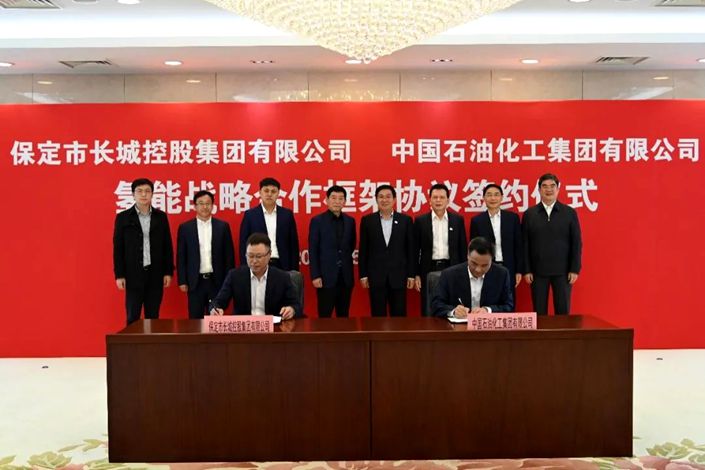 Representatives from Sinopec and Great Wall sign the cooperation agreement on May 12. Photo: Sinopec

The two companies will team up to demonstrate vehicles powered by hydrogen fuel cells, build hydrogen refueling stations and develop integrated applications between cars and stations, according to their respective press releases.

Hydrogen fuel cells are seen by some as an emerging solution for slashing planet-warming carbon dioxide emissions from transport. The cells power vehicles by combining hydrogen in a tank with oxygen from the air, producing only water vapor as a byproduct.

But the technology is far from squeaky-clean, as producing the hydrogen for the cells continues to rely heavily on natural gas — a fossil fuel that emits carbon when extracted — and energy-intensive industrial processes like electrolysis.

Additionally, the high costs of hydrogen technology have so far prevented infrastructure suppliers — like makers of fueling stations — from parting with the cash needed to expand their operations to the scale needed to bring costs down.

Nonetheless, the cost of owning hydrogen-powered vehicles is expected to fall dramatically over the coming half-decade, with Deloitte projecting that they will become cheaper than battery-powered cars by 2026 and cheaper than traditional combustion-engine vehicles by 2027, according to a report the consultancy co-published last year with Ballard Power Systems.

In China, interest in the sector has gathered speed, in part thanks to the government’s bold pledge to bring carbon emissions to a peak by 2030 and reduce them to net zero by 2060.

Sinopec Chairman Zhang Yuzhuo said at the signing ceremony that the state-owned energy titan planned to build 1,000 hydrogen fueling points across its network of gas stations — China’s largest — by 2025, according to a statement (link in Chinese) published Wednesday on the website of Great Wall Motor Co. Ltd. (2333.HK), Baoding’s main auto subsidiary.

Hong Kong-listed Great Wall Motor is one of China’s biggest SUV manufacturers. In March, the company said it planned to spend 3 billion yuan ($465 million) on hydrogen research over an unspecified time frame.