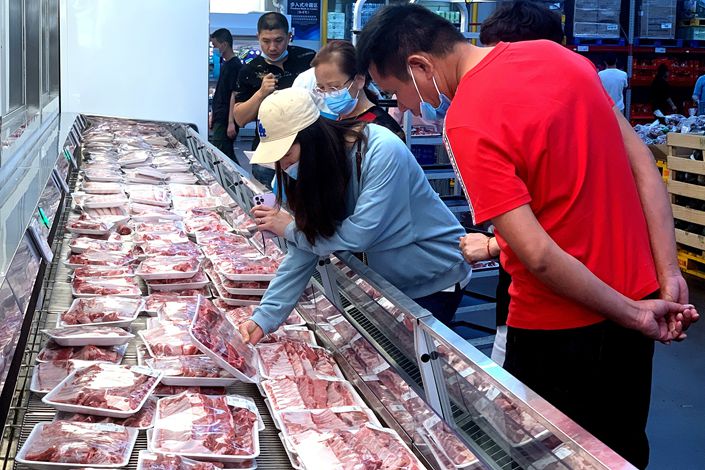 Shoppers pick out pork on May 3 at a supermarket in Fuzhou, East China's Fujian province. Photo: VCG

CPI inflation picked up thanks to rising nonfood prices

PPI inflation jumped on surging upstream prices and low base

CPI to rise gradually while PPI to peak around May-June

Global demand recovery, overseas supply disruptions due to pandemic, and tight controls on domestic production (for example, operating rates of Tangshan’s steel blast furnaces were only 47% in April) have pushed up upstream prices both globally and at home, fueling the sharp increase of PPI in the past months.

We expect the sequential momentum of PPI to fade and some commodity prices to drop later in the year, as commodity-intensive activities slow and supply grows. With the fading base effect ahead, we expect PPI’s year-on-year growth to peak around May-June at more than 7% year-on-year, while staying elevated in the second half of this year. To put it into context, the previous highs were 7.8% in February 2017, 7.5% in July 2011, and 10.1% in August 2008. While some of the PPI strength may transmit to downstream sectors into core consumer goods prices, the magnitude will likely be limited given the competitive landscape, which may weigh on the profit margins of some downstream companies. With continued weakness in food prices, we expect average headline CPI to rise to around 2% in the third quarter and more than 3% in the fourth quarter, leading to an average CPI at around 1.7% in 2021.

The surge of PPI inflation, especially in upstream prices, has increased input cost pressure, notably for mid- and downstream sectors. It may squeeze profit margin for the latter, and impose upward inflation pressure for final consumer goods. Some local governments are still tightly controlling production over upstream products for the sake of environmental protection and “carbon neutrality.”

That said, we think the government may temporarily increase flexibility of production controls to further rein in the sharp increase in commodity and raw material prices. As the pass-through of PPI to CPI is still modest, the People’s Bank of China (PBOC) may be in a “wait-and-see” mode in monitoring inflation pressure. We continue to expect credit growth to slow further to around 11% by end-2021 and market interest rates to edge up in May-June before cooling in the second half. We still expect a 5 basis point hike in medium-term lending facility and repo rates in September-October. That said, we don’t think the PBOC will tighten liquidity or hike rates aggressively, as the CPI may stay largely controllable through most of 2021 and some supply side disruptions are likely transitory.