Wang Tao: China’s Demographic Challenges for the Next Decade (Part 2) 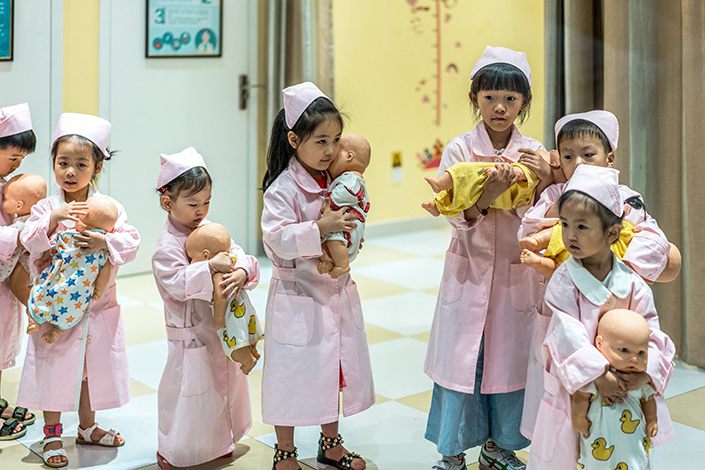 China’s population will peak regardless of policy changes. Photo: VCG

Here are the demographic challenges China faces in the next decade:

Some uncertainties notwithstanding, China’s population is likely to peak in the next 10 years. Before the latest census data, the United Nations Development Programme (UNPD) population model predicted the country’s population would peak around 2031 at about 1.464 billion. However, the latest census data puts China’s 2020 population at 1.411 billion, rather than the UNPD estimate of 1.439 billion, and the underlying birth rate has likely changed as well. Some experts predict China’s population peaking as early as 2025 or 2028 at 1.44 billion to 1.45 billion.

Further relaxation of population policy will likely have limited impact on birth rates. The National Bureau of Statistics (NBS) survey shows that the average number of desired children per woman at fertility age is 1.8, which suggests scope for increasing actual birth rates somewhat from the current low level. However, birth rates in most East Asian economies have been very low as well. Although most of them saw total fertility rate (TFR) dropping below 1.5 at a more advanced development stage relative to China today, South Korea’s TFR declined to China’s current (2019) level at a GDP per capita (at constant price) even lower than China’s today. Some business leaders and experts advocate for the government to grant subsidies to encourage child-birth, though we think such policy is unlikely given the government’s concern with lifting the living standard of the existing 1.4 billion people, advancing labor transfer from the rural sector, and dealing with the old-age care challenges. These latter challenges may be more pressing for the government at this stage.

In addition, retirement age will likely be extended, which the 14th Five-Year Plan (FYP) has already called for. China’s official retirement age is 60 for men and 55 for women. In reality, the average retirement age is less than 55, according to the Ministry of Human Resource and Social Security. An extension of the retirement age by three years on average by 2030 could result in an increase of more than 60 million people in the work force by then. In addition, reform to the household residency — or “hukou” — system and the social safety net may help increase labor participation rates, as both would make it easier for people to move to places with more jobs and with family members.

A weaker labor supply will lead to slower trend GDP growth and continued shift in China’s economic structure. Even with continued labor transfer from rural areas and a likely extension of retirement age, we still expect labor supply growth to slow in the next decade. We forecast China’s potential GDP growth from 2021 to 2030 to slow to more than 4.5% per year, weighed down by aging population and other long-term challenges. This forecast assumes a modest nonfarming employment growth of 0.6% a year (versus 2.1% a year in the past decade), or 40 million more people employed in non-farming in 2030 than in 2020. This means that the increase in the nonfarming labor supply from transfer of rural workers and extension of the retirement age will more than offset the decline in the working age population. Better education and increased labor participation can push up potential labor quality, or human capital, though will not reverse the long-term trend of slower labor supply growth.

As almost 22 million fewer young people are expected to join the labor force in the next decade compared to the previous decade, we expect labor intensive sectors that rely on non-skilled workers to continue to face the pressure of rising labor costs. As a result, we should see continued supply chain shifts, with labor-intensive manufacturing either moving to cheaper places or a quicker pace of automation. We continue to expect faster growth in automation equipment, robotics, and acceleration in digitalization, which helps to boost productivity growth. While the manufacturing sector may be able to adopt automation to increase labor productivity, it may be more difficult for labor-intensive services sectors to do so, potentially challenging some of the digital economy that relies on cheap labor.

As China develops further and its population continues to age, spending patterns will continue to shift toward services, especially health care, insurance and old-age care. The number of people aged 60 and older is expected to increase to 364 million by 2030 (or 24.8% of the population), and those 70 and older would number 158 million, according to the UNPD. Research shows that population aging leads to secular shifts in the consumption pattern as the elderly spend less on transportation, communication and education than the young, and more on medical services, utilities, and other services. Data from the U.S. clearly demonstrates the different spending patterns by age group. China’s own household consumption data over the past two decades show that spending on health care, transportation and communication, and housing have increased at the expense of spending on clothing, and food and beverages.

As population ages, the current pension system will come under increasing stress, necessitating policy changes and development of corporate annuity and private pensions. The Chinese Academy of Social Sciences estimates that China’s urban employee basic pension system will start to have a funding gap around 2029 and deplete accumulated pension surpluses by 2036, if no adjustments are made. Subsequently, the funding gap would expand every year, and China’s 2050 public expenditure on pensions may be higher than current OECD countries as a share of GDP. Increasing the length of pension contributions and broadening the base for calculating pension contributions would help, but will likely be difficult to implement. The extension of retirement age and changing the replacement ratio (currently around 45% of wages) will also help. As such, we expect faster development of corporate annuity and private pension plans, which will likely be encouraged by the government. Rising pension responsibility means the government has to be more prudent on fiscal policy and local government debt control. The fiscal pressure could also lead to more divestment of state-owned assets, including state-owned enterprises

Property development faces further downward pressure as the population peaks. The UNPD model predicts that the number of people in the main home buying cohort (25- to 44-year-olds) would decline by about 32 million over the next decade, compared to the 24 million drop in the previous decade. That said, household size will likely decline further with single-person households increasing. The share of single-person households increased from 8.3% in 2000 and 14.5% in 2010 to 18% in 2019. This increase meant there are 30 million more single person households than in 2010, an important factor behind the 92 million additional households in 2020 relative to 2010. If single person households were to increase further to 25% and household size declined further to 2.4 persons by 2030, China’s overall household numbers would increase by another 60 million from the 2020 level. This could help offset the impact of the declining home-buying population. Nevertheless, we expect slower growth in household formation and urbanization to put downward pressure on demand.

At the same time, continued uneven urbanization means property activities in coastal and higher tier cities will be supported, but those in Northeast and Central provinces and lower tiers may face headwinds. In addition, the de-carbonization campaign over the coming decade will likely support renovation of old buildings to improve energy efficiency.

To mitigate the negative impact of the aging population on the labor market, we expect increased education spending, especially vocational training and on-the-job training by employers. Over the next decade, the UNPD population model predicts that China’s school-age population will on average stay largely stable relative to that in the previous decade, perhaps thanks to the recent relaxation of the one-child policy and the third generation effect of the 1960s baby boom. However, we expect the enrollment for high school and higher education, including vocational schools, to rise further from the current level. This is consistent with the government’s target of increasing average education levels for the working age population by half a year in the 14th FYP period. There are also suggestions to increase mandatory education from the current nine years to 12 years to include high school. That should further increase years of education and human capital, though it may lead to a steep drop in the labor participation rate and labor supply for a few years.

The impact of population aging on inflation may be ambiguous. A weaker labor supply, fewer young people entering the labor force, and a larger services sector will likely lead to an increase in unit labor costs, leading to higher inflation. However, lower growth and a shift in the economic structure may also dampen inflationary pressures. On the asset market, we should expect to see weaker long term growth and an increasing need to save for retirement to keep interest rates from rising over the long term.

Wang Tao is the head of Asia economics and chief China economist at UBS Investment Bank. The article is the second part of the author’s analysis on China’s latest census. Read the first part here.