By Zhang Erchi and Yaling Jiang 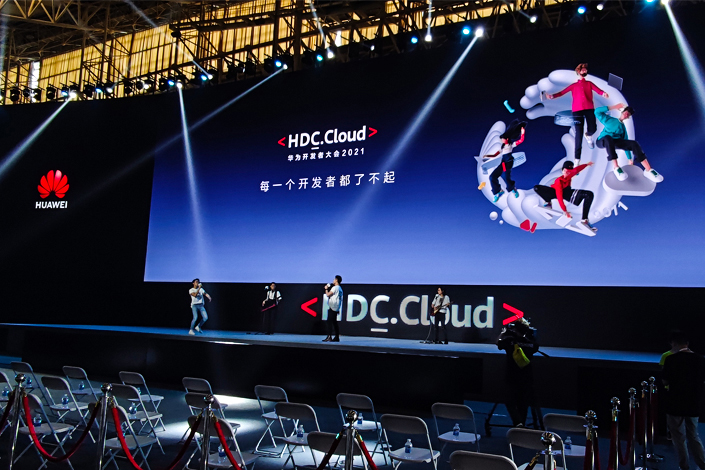 It’s time for Huawei to prove itself.

After enduring three rounds of U.S. sanctions, the Chinese telecommunications giant has suffered two straight quarters of falling revenue, with its revenue for the first quarter of 2021 down 16.5% year-on-year to 152.2 billion yuan ($23.6 billion).

Since December, almost everything Huawei Technologies Co. Ltd. has done — the corporate restructuring, the shuffling of executives, the shift in focus from making thing to providing services — has been done with one goal in mind — getting back to growth.

The question of whether the company will achieve that goal is one for the soothsayers, but success will likely hinge on how well it can ramp up two parts of its business that it hopes will offset the lost growth from its core telecommunications hardware enterprise — the cloud and a segment that it has been calling “digital power.”

Huawei sees these two areas as its way of tapping into two current global trends — digital transformation and carbon neutrality, according to Zhou Taoyuan, president of the company’s digital power product line, which includes photovoltaics, electric vehicles and module power, among others.

For both, the company hopes to be able to provide the infrastructure necessary to accommodate the changes brought on by these trends — the cloud for digital transformation, and the energy infrastructure needed to make the transition from fossil fuels to renewable energy.

In some ways, the change in strategy is embodied by Yu Chengdong, the executive in charge of Huawei’s smart car solutions business who in January took over Huawei Cloud. Yu, who also goes by the name Richard Yu, ran Huawei’s smartphone business until it sold off its budget Honor brand in November in response to the U.S. sanctions.

At the company’s annual developer conference at the end of April, he noted that Huawei didn’t see its future in phones. “It’s now inevitable that companies will need to get on the cloud,” he said. “The cloud is the future of the information and communications technology industry, and it will be the foundation of every corporation’s digital transformation.”

For Huawei, the stakes are high because there may be no turning back. Since 2019, when the former U.S. administration under Donald Trump began sanctioning the tech giant for what it said were national security reasons, its access to items produced with U.S. technology has been curtailed. Since mid-September, it has suffered a shortage of microchips, particularly those needed to power its smartphones. In the first quarter of 2021, Huawei got squeezed out of the top five global smartphone brands, selling less that 60% of the devices that it shipped in the same period last year, according to market monitor IDC.

Meanwhile, its network gear business has suffered outside of China due to U.S. pressure. Since March, Huawei has been under a fourth round of American sanctions that restrict companies from supplying items to the company that can be used in conjunction with 5G devices.

Having already been locked out of the 5G trials in countries like the U.K. and Romania, Huawei got news on May 4 that India’s Department of Telecommunications, which once had close ties with the company and other Chinese corporations, had excluded it from the list of international suppliers for its 5G mobile phone network. Huawei did not respond to requests for comment about the development.

The cloud business is a response to companies’ growing need for more computing power, data storage and other computer resources as more and more business have moved online over the last two decades. Cloud providers make their money by offering companies a way of outsourcing their computing and storage needs, allowing their clients to avoid investing in servers and other infrastructure, as well as the personnel needed to keep it all running.

Huawei got into the cloud as early as 2010, but the company didn’t break out the venture from its three main business groups — enterprise, consumer and carrier — until 2017, when it vowed to make Huawei Cloud one of the top five players in the industry.

Last year, it accomplished that goal. In 2020, Huawei Cloud had a 4.2% share of the global infrastructure-as-a-service market, enough for it to rank fifth worldwide after Amazon Web Services (40.8%), Microsoft Azure (19.7%), Alibaba Cloud (9.5%) and Google Cloud (6.1%), according to a report from April 21 this year by research firm Gartner Inc.

Huawei is now focusing its energy on the kind of cloud computing that relies purely on software, which is much less affected by sanctions. Even when sanctions bit into Huawei’s business in 2020, its cloud business’s revenue still grew by 168% for the year.

Moreover, the Covid-19 pandemic, which bound much of the world’s workforce to their homes, has hastened the speed at which corporations are adopting cloud systems. The idea that the time was right in 2020 to go hard into the cloud was something that Huawei’s Rotating Chairman Ken Hu alluded to in an earnings call at the end of March. “There is an unprecedentedly strong sentiment that corporations will move to the cloud,” Hu said.

According to Huawei’s own research, more than 86% of corporate managers estimated that their employers would earmark additional funds for their “digital transformation” after the pandemic, Hu said. One-quarter of the managers projected that their companies might spend as much as 20% more than their current budgets.

Huawei had 35.7 billion yuan stashed away in cash and short-term investments in 2020, down from 37.1 billion yuan in the previous year, according to the company’s 2020 annual report. It is likely that some of that money went into the stockpile of microchips that Huawei built up last year before U.S. sanctions took effect. Still, tens of billions of yuan in annual cloud business expenses will add to the financial pressure on Huawei.

The idea behind edge computing is that bringing servers closer to customers improves response times and reduces the amount of bandwidth that gets used. That means better service for customers, but also requires cloud providers to have their infrastructure in a lot more places.

The situation requires cloud service providers to continuously invest in their businesses while reaping lower revenue in the short-term, Dai said.

He thinks that Huawei needs to hold fast to its strategy and realistic expectations to succeed.

At Huawei’s 2021 annual meeting, Ren said that the company should “seize the opportunity of the digital power boom.”

The area that Huawei calls digital power achieved some of the highest growth numbers of any of its businesses in 2020, said Zhou, president of the company’s digital power product line.

The business is the one that Huawei hopes to tap into the global carbon neutrality trend. As the world moves from fossil fuels to renewable energy, new-energy cars will replace conventional gas guzzlers in waves, Zhou said. “The drive toward a more digital world will bring about rapid growth for energy infrastructure,” he added.

Like with the cloud, the strategic shift into digital power has the advantage that it is more or less immune to U.S. sanctions. Making solar inverters, for example, doesn’t require advanced microchips, and all of the components can be sourced in China. In 2019, it was business as usual for Huawei’s solar inverter unit. Even as the company came under U.S. sanctions in 2019, it still managed to double its share of the overseas market for the key component for solar power plants.

The second wave of sanctions, which were announced in May 2020, turned out to be a turning point for Huawei.

Before this wave hit, Huawei enterprise business group mainly produced simple networking equipment like Wi-Fi routers, according to Lu Yongping, vice president of Huawei’s global digital power business unit. After the second round of sanctions was announced, Huawei refocused on developing products for industries such as energy, finance, transportation and government.

“Currently we have R&D in place at every business unit targeting an industry customer,” Lu said. “We start with proposals, and if there are any future-looking elements in which we see great potential and we have the technological know-how, we will develop these components and incorporate them into our final products.”

This round of adjustment has yielded results for the enterprise business group. In 2020, the group’s revenue grew 23% to 10 billion yuan, with two-thirds coming from China.

Cui Hao contributed to the story.