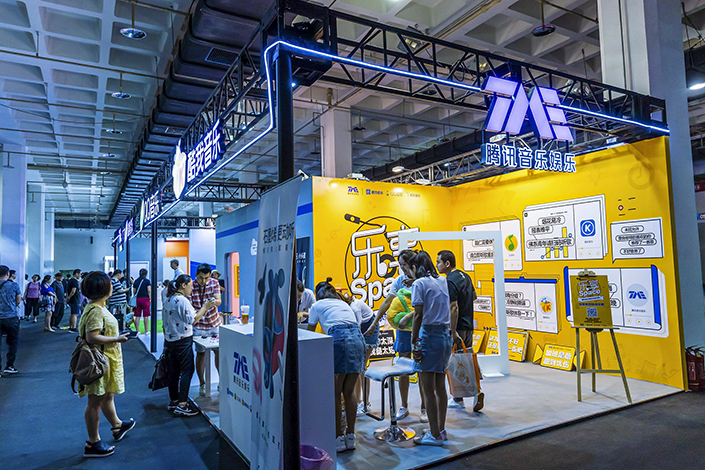 Visitors check out a TME booth in Beijing in July 2018. Photo: VCG

New York-listed TME reported 926 million yuan ($141 million) in net profit attributable to equity holders in the first quarter of this year, a 4.4% increase on net profit of 887 million yuan in the same period last year, according to the company’s latest unaudited quarterly report released Monday.

Its total revenues grew 24% year-on-year to 7.82 billion yuan in the first quarter of this year, the report showed. TME’s online music services generated 2.75 billion yuan in revenue, up 34.5%, while its social entertainment and other services brought in 5.08 billion yuan, up 18.9%. Specifically, revenues from music subscriptions grew 40.2% to 1.69 billion yuan, according to the report.

Cussion Pang, executive chairman of TME, said in a statement following the release of the report that for online music services, its revenue growth accelerated quarter-over-quarter, driven by strong momentum in music subscriptions and advertising services. “For our long-form audio business, we have made significant breakthroughs, with 20% of our music MAUs listening to long-form audio in the first quarter,” Pang said.

However, its online music mobile monthly active users (MAUs) shrank by 6.4% year-on-year in the first quarter of this year, which the company said was “primarily due to some churn of our casual users served by pan-entertainment platforms.”

Expanding the music library with more licensing deals has been a core strategy for TME. In March, it said that it had agreed to create a joint venture record label with Warner Music, in an attempt to give it an edge over rivals like NetEase Cloud Music and lure paid subscribers with larger licensed music libraries.

Another challenge for TME lies in the heightened scrutiny from Chinese regulators. “In recent months, we have received increased regulatory scrutiny from relevant authorities and have been actively cooperating and communicating with the relevant regulators,” Cheuk Tung Tony Yip, chief strategy officer of TME, said in the earnings call following the release of the results.

Yip said that the company is committed to “complying with all relevant laws and regulations, including those related to antitrust,” adding that “we are not in a position to comment or predict potential outcomes of such dialog with the regulators.”

In April, TME announced a major shuffle in its top ranks touched off by the departure of its long-serving chairman Tong Tao Sang, who also goes by Dowson Tong, as the company repositions itself following past criticism of potentially anticompetitive behavior. Such criticism was leveled after the company obtained master licensing rights for China from many major global and regional music labels, effectively making it the gatekeeper for all their music in the country at the time.

The huge clout wielded by China’s internet giants, most notably Tencent Holdings Ltd. and e-commerce giant Alibaba Group Holdings Ltd., has attracted attention from the nation’s antitrust regulator over the last two years following years of unchecked growth for both companies. In April, that campaign reached a crescendo when the State Administration of Market Regulation fined Alibaba a record $2.8 billion for monopolistic practices and ordered it to change its ways.