BYD Fleshes Out Plans to Sell Electric Cars in Norway

By Matthew Walsh and Zheng Lichun 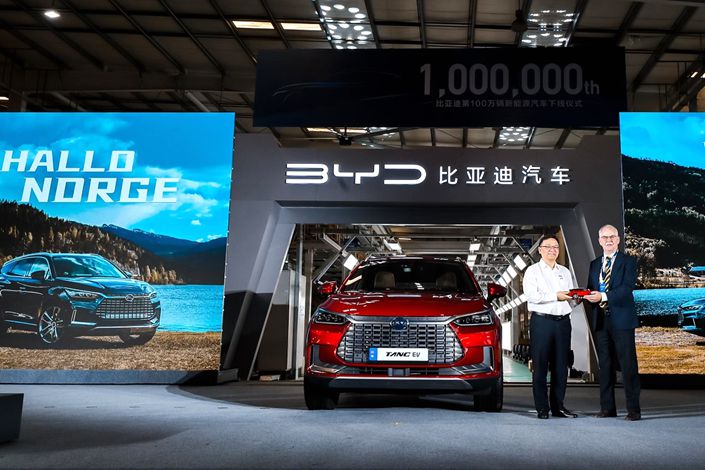 BYD Co. Ltd. said it plans to sell 1,500 cars in Norway by the end of the year, fleshing out its strategy for the Scandinavian nation seen as a testbed for Chinese electric vehicle-makers to push more deeply into the massive European market.

The Warren Buffett-backed automaker will dispatch 100 of its all-electric Tang SUVs to the northern European country this month for delivery in the third quarter, CEO He Youjun said at a corporate event Wednesday.

It’s the first time BYD has put a number on its projected Norway sales, after the Shenzhen-based company said in March that it planned to market the Tang in the country through a tie-up with local partner RSA, a major importer.

At least five Chinese automakers are targeting Norway’s electric vehicle (EV) market. The frosty nation of just 5 million people is popular among the Asian giant’s rapidly growing EV-makers thanks to its lack of a homegrown auto industry, world-leading uptake of battery-powered vehicles and ambitious climate pledges.

According to ZSW, a German nonprofit, electric vehicles accounted for over 60% of new registrations in Norway last year, more than double the equivalent proportion in neighboring Sweden and some six times the figure for global automotive powerhouse Germany.

Norway’s government has backed a slate of policies that bode well for its EV sector. The glacier-rich nation, part of which lies in the rapidly warming Arctic Circle, aims to cut its greenhouse gas emissions by around half by the end of the decade, based on 1990 levels.

Oslo also plans to ensure that all new passenger cars and light-goods vehicles sold by 2025 produce zero emissions, and has issued preferential tax credits for the EV industry, such as waiving the 8,500 euro ($10,397) registration fee that applies to cars that run on fossil fuels.

Although Norway is not a member of the EU, it participates in the European Economic Area, meaning it follows most of the bloc’s trade rules. That status makes it attractive to auto firms that potentially have one eye on an expansion into the rest of the continent, which last year overtook China to become the world’s largest EV market.

Out of the five, SAIC MG has the largest market share in Norway with 4.8%. The British marque, which was bought by a precursor of the Chinese state-owned firm in 2007, sold 3,720 vehicles in the kingdom last year.

But it faces increasing competition from its homegrown rivals, with Xpeng announcing its Norwegian foray back in December, followed by Hongqi in February, BYD in March and Nio earlier this month.

Speaking at a ceremony to mark the sale of BYD’s millionth vehicle, CEO He said the company’s Norway sales targets showed that its strategy to go global was picking up pace.

The Hong Kong- and Shenzhen-listed company said in March that the Norwegian version of the Tang would feature seven seats, an exclusive interior and a maximum range of more than 500 kilometers (311 miles) on a single charge.

BYD said last month that it would spin off its battery business, FinDreams Battery, in order to list the promising unit sometime in the next two years. FinDreams makes BYD’s signature “blade batteries,” which the carmaker says are safer and cheaper than conventional cells because they do not use expensive, sometimes-volatile cobalt.

This article has been amended to include BYD’s share prices.

An earlier version of this story gave the incorrect information about where BYD is listed. It is listed in in Shenzhen and Hong Kong.