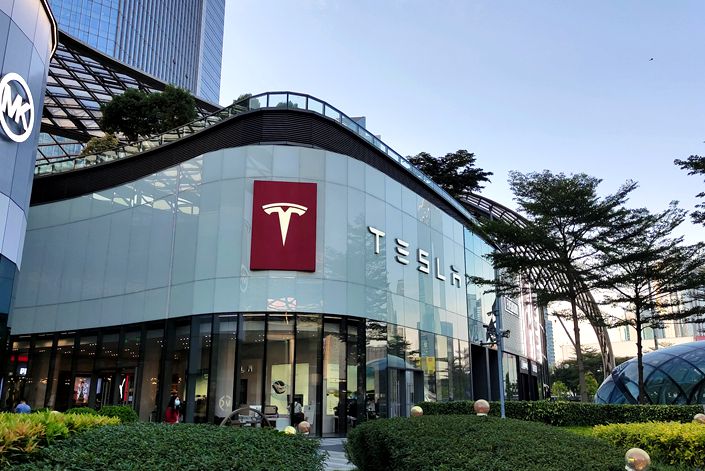 Tesla plans to build data centers across China, with a promise to give car owners access to its vehicle information checking platform. Photo: VCG

Tesla Inc. said it had built a new data center in Shanghai to store information gathered on local users and their vehicles, as the star electric-car maker sought to accommodate a tightening regulatory regime and hose down unsubstantiated claims that its cars pose national security risks.

In a post published on social media platform Weibo on Tuesday, Tesla reiterated that data generated by all cars it sells in China will be stored there. Hot sales of its Shanghai-assembled Model 3 and Model Y have made it a household name in the country, but a string of recent controversies have soured public sentiment.

The move should help the firm stay on the right side of Beijing’s stiffening rules on the use of user data, which are set to include greater control over information collected by carmakers.

Tesla plans to build more data centers across the country, with a promise to give car owners access to its vehicle information checking platform, according to the post.

The draft rules would require user data collected by automakers to be stored locally, and would ban such information from being sent overseas without authorization.

Last week, executives at Tesla attended a data security seminar held by the Cybersecurity Association of China, a think tank, in which attendees pledged support for stepped up controls.

But privately, the stiffening regulatory regime has triggered heated debate in the industry.

An executive in charge of software development at one car manufacturer told Caixin that while it should be routine for carmakers to submit safety data to investigators in the event of a car accident, excessive control of data collection, particularly on driver behavior, could interfere with carmakers’ efforts to improve their products.

Data security on the agenda

Concerns have repeatedly cropped up overseas about user data from popular Chinese electronics and apps like TikTok being potentially sent to and stored in the People’s Republic, posing a potential threat to the security of other nations. A similar discourse is emerging in China, with Tesla a prime target.

TikTok has consistently denied that it hands over data to the Chinese government, and has previously stated that data from the app's international version is held in data centers in places like the U.S. and Singapore.

In mid-March, Tesla cars began to be banned from Chinese military complexes and housing compounds because of concerns about sensitive data being collected by cameras built into the vehicles.

Residents of military housing were among those told of the ban, which was triggered by concerns that Tesla is collecting sensitive data via cars’ in-built cameras in a way the Chinese government can’t see or control, a person familiar with the matter said at the time.

The development prompted a strenuous denial from Tesla CEO Elon Musk that the company would ever use a vehicle’s technology for spying.

On March 20 at the China Development Forum, a conference organized by a unit of the country’s State Council, Musk said that if Tesla ever used its cars to spy in China, or anywhere, the company would get “shut down everywhere.”

“If a commercial company did engage in spying, the negative effects to that company would be extremely bad,” said Musk, who was beamed in remotely from the U.S. “For example, if Tesla used the cars to spy in China — or anywhere, any country — we will get shut down everywhere. So there’s a very strong incentive for us to be very confidential with any information.”

China, the world’s biggest market for electric vehicles, is key to Musk’s global growth ambitions. The company sold more than 130,000 locally built Model 3 sedans last year in the nation, now its second-largest market after the U.S.

But the Nasdaq-listed carmaker has repeatedly stumbled in recent months. Beijing took the rare step of reprimanding Tesla after its response to a protestor at April’s Shanghai auto show, who climbed on top of a Tesla exhibit and loudly alleged that the company’s cars had safety issues.