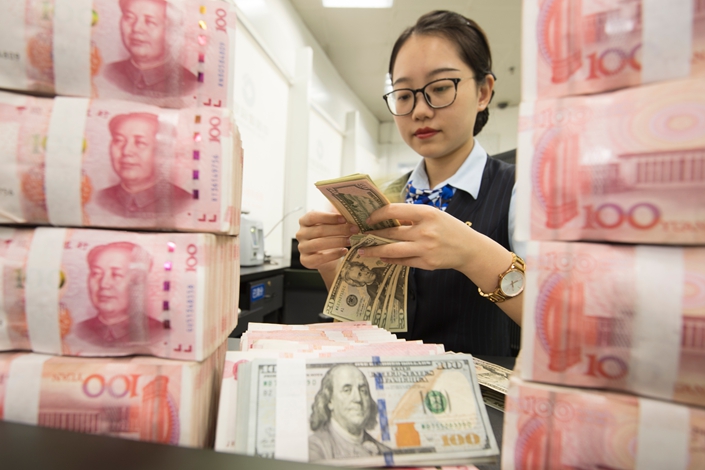 The currency’s appreciation is being driven mainly by the weakening dollar, although confidence in the Chinese economy and the economic outlook are also attracting strong fund inflows. Photo: IC Photo

As China’s yuan surged to a fresh three-year high against the U.S. dollar this week, analysts expect the currency to remain strong as the Chinese central bank has yet to show signs it’s concerned about the pace of appreciation and the greenback’s weakness looks set to continue.

The yuan has been on a tear since the end of March when it was trading in the onshore market at around 6.57 yuan per dollar. After rising beyond 6.4 yuan for the first time since mid-June 2018 in intraday trading on Tuesday, the Chinese currency has continued to strengthen and reached around 6.37 on Thursday evening Beijing time. The currency has gained 0.93% since Friday’s close.

The currency’s appreciation is being driven mainly by the weakening dollar, although confidence in the Chinese economy and the economic outlook are also attracting strong fund inflows from international investors, which is also boosting demand for the yuan, analysts say.

The Dollar Index, which measures the value of the dollar against a basket of six major currencies, has been on the slide since March 2020, although there have been brief bouts of strengthening. The trend of the yuan’s exchange rate is still dominated by the dollar, so as long as the U.S. currency’s softness continues, the yuan is unlikely to reverse course, Huang Wentao, a bond analyst with China Securities Co. Ltd., wrote in an opinion piece (link in Chinese) earlier this week.

The dollar is likely to remain weak as the upside for growth in the U.S. economy is limited, with the country’s vaccination efforts and the early phase of the post-pandemic economic recovery coming to an end, Huang wrote. The U.S. will no longer take the lead in boosting world growth, as economies in Europe and emerging markets have narrowed the gap in recovery with their efforts to accelerate vaccinations, he said.

The dollar will likely soften in the second half of this year as inflationary pressures continue to build and currency markets worry about the “double deficit” of the budget account and current account due to the Biden administration’s loose fiscal policies, analysts at the research department of investment bank China International Capital Corp. wrote in a report published Wednesday.

Speculation in the financial markets has grown that the People’s Bank of China (PBOC) is prepared to tolerate yuan appreciation and won’t intervene to push it lower as the currency is used as a tool to combat imported inflation which is being driven by surging commodity prices. Many analysts say the world is entering a period of rapidly accelerating inflation, as global demand recovers from the pandemic more rapidly than supply is able to respond to in the wake of unprecedented fiscal stimulus measures and lax monetary policies in major developed countries.

The speculation has been fueled by comments published over the past week by various central bank officials including Deputy Governor Liu Guoqiang, Zhou Chengjun, head of the PBOC’s Finance Research Institute, and Lü Jinzhong, head of research at the PBOC’s Shanghai branch.

Liu said in a brief Q&A statement (link in Chinese) on the central bank’s website on Sunday, that “in the future, the trend of the RMB exchange rate will continue to depend on market supply and demand and changes in international financial markets, and two-way fluctuations will become the norm.”

Analysts at Citic Securities Co. Ltd. said his comments indicate that central bank has a larger tolerance for the exchange rate fluctuations, which gives the yuan more room for further appreciation. They expect the yuan to strengthen to 6.2 per dollar.

In a speech published (link in Chinese) on May 19, Zhou said that China would eventually have to abandon its control over the exchange rate if it wants to achieve internationalization of the yuan and that the currency’s value would have to be determined by global market participants. He said the PBOC has made it clear it has stopped regular intervention and will allow the market to play a bigger role in deciding the yuan’s exchange rate.

Writing in China Finance, a magazine run by the central bank, Lü said a stronger yuan could help offset rising commodity prices and prevent imported inflation. Policymakers in China are becoming increasingly concerned about the impact of accelerating inflation emanating from overseas — the PBOC highlighted the risk in its first-quarter monetary policy implementation report published May 11.

China’s producer price index (PPI), which gauges changes in prices of goods circulated among manufacturers and mining companies, has shot up this year after 11 months of negative price growth in 2020. The index jumped 6.8% year-on-year in April, the most since October 2017.

As the world’s second-largest economy, and biggest manufacturer and goods exporter, China is a major importer of commodities such as oil, iron ore and coal whose prices have been surging this year, fueling expectations that inflation will accelerate. If the yuan continues to maintain strong, the unit price of commodities will grow slower, or even decline, which will reduce the imported inflation caused by rising commodity prices and thus reduce the cost pressure on China’s importers, the Citic Securities analysts said.

However, appreciation could be a double-edged sword, as a stronger yuan would reduce the price competitiveness of China’s exports and dampen the profitability of exporters, analysts with Ping An Securities Co. Ltd. wrote in an opinion piece this week. Overseas demand may have already reached a peak and is going to fall back, which will add to pressure of Chinese exporters, they said.