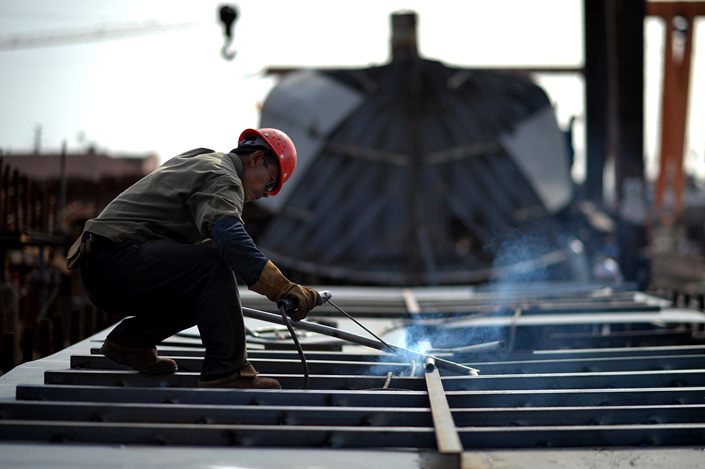 China’s manufacturing sector expanded at the fastest pace in five months in May despite surging raw material costs, a Caixin-sponsored survey showed.

The Caixin China General Manufacturing Purchasing Managers’ Index (PMI), which gives an independent snapshot of the country’s manufacturing sector, rose slightly to 52 in May from 51.9 the previous month, according to a report released Tuesday. A number above 50 signals an expansion in activity, while a reading below that indicates a contraction.

“China’s manufacturing sector continued to expand in May, with firms reporting the strongest increase in new work for five months,” the report said.

The expansion in total new orders was supported by greater demand both at home and overseas, with new export orders increasing at the fastest pace in three months. As a result, manufacturers’ output rose further in May, though at a slower pace than the previous month amid material shortages and higher purchasing costs, the report said.

That came as the average costs of manufacturers rose sharply last month, with input prices increasing at the steepest pace since December 2016. Surveyed companies attributed that to higher raw material costs. The firms thus passed on rising costs to clients, leading to a hike in output prices at the fastest pace last month since February 2011.

The gauge for employment came in just marginally above 50 in May. While some manufacturing firms added to their payrolls in order to expand capacity, other firms took a more cautious approach to hiring due to rising input costs, the survey showed. Therefore, backlogs of work rose for the third month in a row last month.

Manufacturing firms remained confident that output would increase over the next 12 months. But the level of positive sentiment dipped to a four-month low in May, largely due to concerns over rising costs and pandemic-related uncertainty, according to the survey.

China’s producer price index (PPI), which gauges changes in prices of goods circulated among manufacturers and mining companies, has shot up this year after 11 months of negative price growth in 2020. The index jumped 6.8% year-on-year in April, the most since October 2017. Following that, policymakers pledged to stabilize commodity supply and prices at State Council executive meetings last month.

China’s official manufacturing PMI, released by the National Bureau of Statistics on Monday, fell slightly to 51 (link in Chinese) in May from 51.1 the previous month. The official PMI polls a larger proportion of big companies and state-owned enterprises than the Caixin PMI, which is compiled by London-based data analytics firm IHS Markit Ltd.