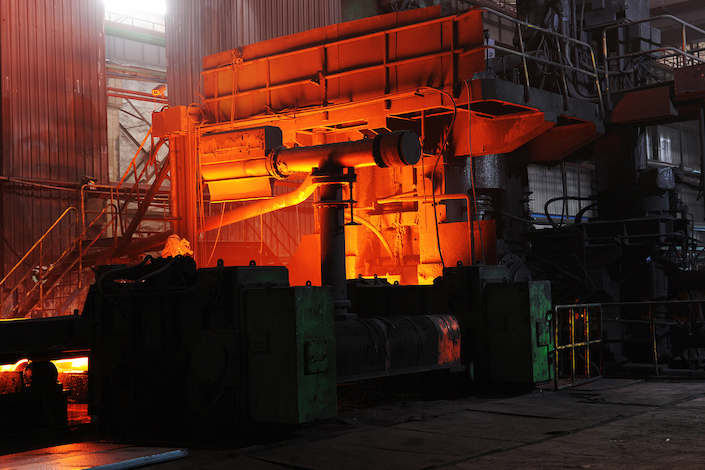 Tangshan, China’s largest steel producing city in the northern province of Hebei, is considering easing steel output limits in the second half this year to increase supply in response to a recent surge in steel prices, Caixin learned.

The Tangshan city environmental authority met with local steel companies Monday to discuss relaxation of production limits that were imposed in March, sources with knowledge of the matter told Caixin. The city government ordered local steel mills to slash production by at least 30% between March 20 and Dec. 31 as part of efforts to reduce pollution.

Now Chinese authorities are pushing to cool steel prices following recent surges amid the post-pandemic recovery and a global commodity boom. The most-traded contracts for construction-grade steel rebar and hot-rolled coil climbed to record highs May 12, gaining nearly 15% in less than two weeks.

Steel prices have dropped in response. On May 26, contracts for construction-grade steel rebar closed at 4,667 yuan ($733) per ton and hot-rolled coil at 5,017 yuan per ton, down nearly 25% from the May 12 peaks. The prices have gradually rebounded over the past few days.

Tangshan accounted for 13.7% of China’s total crude steel production last year with output of 144 million tons. A document from the Tangshan meeting seen by Caixin showed that the goal for 15 steel mills’ production cuts will be reduced from the previous 30% to 20% for some suppliers during the period between July 1 and Dec. 31. Five steel companies will maintain their target cuts of 30% from July 1 to Dec. 31, but their goals for reducing emissions will be relaxed, the document showed.

China has pledged to produce less steel this year than in 2020 after its output of the commodity topped 1 billion tons last year. The industry is a major polluter and emitter of carbon dioxide because of its heavy use of coal. Beijing is working to reduce such emissions as part of efforts to clean up the country’s air and meet a pledge to make China carbon neutral by 2060.