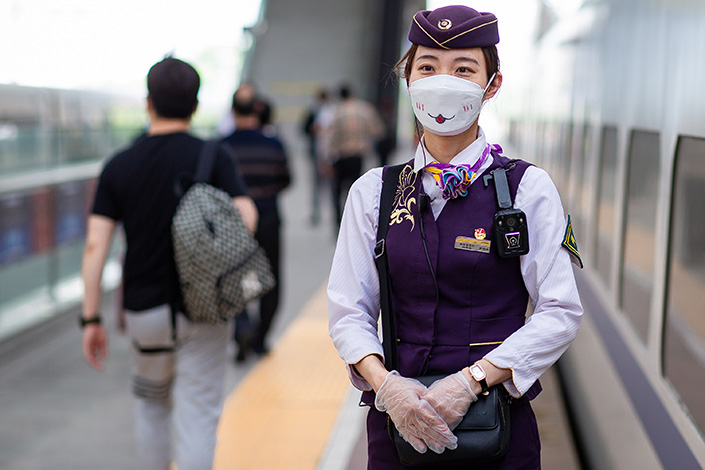 The chief conductor of a high-speed train welcomes passengers at Nanjing Railway Station on May 8. Photo: VCG

China’s services sector expanded at a slower pace in May than the previous month as business confidence dipped to a four-month low, a Caixin-sponsored survey showed Thursday.

The Caixin China General Services Business Activity Index, which gives an independent snapshot of operating conditions in the services sector, fell to 55.1 in May from 56.3 the previous month. A number above 50 indicates an expansion in activity, while a figure below that points to a contraction.

The index, better known as the Caixin China services PMI, showed the services sector expanded for a 13th consecutive month.

The indicator is closely watched by investors as one of the earliest available monthly barometers of the health of the world’s second-largest economy. The fall in the Caixin services PMI follows the slight increase in May’s Caixin China manufacturing PMI released Tuesday, which rose to 52 from 51.9 the previous month.

Overall, the Caixin China General Composite PMI, which covers both the manufacturing and services sectors, fell to 53.8 in May from 54.7 the month before, according to the Thursday survey report.

“(T)he expansion in manufacturing and services maintained its momentum as both supply and demand expanded,” said Wang Zhe, senior economist at Caixin Insight Group. “Overseas demand was generally good, but service exports were affected by the pandemic.”

The breakdown of the May services PMI showed total new business expanded at a slower pace in May than the previous month. The gauge for new export business fell into contractionary territory last month due to the resurgence of the Covid-19 virus in other countries across the world.

In the services sector, the employment measure dipped in May from the previous month, while maintaining the expansionary trend for the third consecutive month. Backlogs of work moved into positive territory in May, with surveyed firms saying growth in new orders put pressure on their operating capacities.

Service companies’ input costs rose at the steepest pace since November amid reports of higher prices for raw materials, energy, staff and transport, the survey showed. As part of efforts to alleviate cost burdens, the firms raised output prices at the steepest rate this year.

Service providers remained optimistic about their prospects over the next 12 months as they expected firmer client demand both at home and abroad. But the overall degree of positive sentiment dipped to a four-month low in May amid concerns over how long the global economy will take to recover from the pandemic.

Looking ahead, Wang warned about heightened inflationary pressure. “Inflation remained a crucial concern as the price gauges in manufacturing and services both rose last month.”

“The price transmission effect emerged,” he said. “Inflationary pressure would limit the room for monetary policy maneuvering, which could hinder the economic recovery. Some enterprises began to hoard goods in response to rising raw material prices, while others suffered raw material shortages. Supply chains were also significantly affected.”

China’s official services PMI, released by the National Bureau of Statistics on Monday, fell slightly to 54.3 (link in Chinese) in May from 54.4 the previous month.