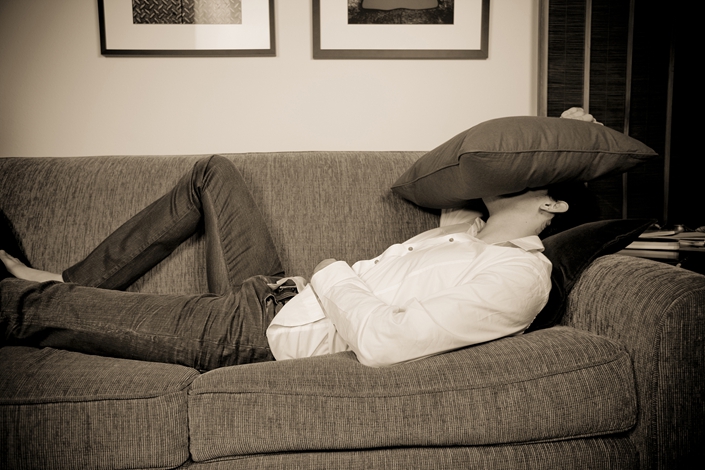 “Tang ping,” literally meaning to lie flat (躺平) or do nothing, a concept that has arisen in response to excessive societal “involution,” or excessive competition, has suddenly gained popularity in China.

When I see those online “tang ping celebrities,” I can’t help but be reminded of the classic “superfluous men” of 19th century Russian literature. Most representative among them is the titular character of Ivan Goncharov’s novel Oblomov. Oblomov is a kind and upright man, but unwilling to take action. Despite his discontent with society, he prefers to lead an idle and quiet life.

In the early 20th century, various schools of Euro-American modernism, such as decadence, absurdism, the “Lost Generation” and existentialism, arose out of the young generation’s dissatisfaction with “outdated systems and moral standards.” The corresponding attitude of “non-violence, non-cooperation” was a trademark of the new youth’s revolt.

From a literary perspective, “tang ping” is hardly a fresh phenomenon.

But the reappearance of such an attitude China is a specific countermove to widespread societal “involution.” It is a retreat tactic used by those reluctant to involve themselves in society’s exhaustions, unwilling to let their already worthless lives be repeatedly depleted.

“Tang ping” appeared after a frenzy of “involution” (内卷) — or intensification without advancement — it is a loosening of the slack after an extreme tightening.

In China, the generations born in the 1990s and ‘00s, now in their 20’s, have experienced a hard “involution” firsthand. From kindergarten all the way up to the college entrance examination, this generation have been inundated by endless extracurricular classes and tests sucking the energy and joy out of their young lives. Their college years may pass leisurely enough, but upon graduating and finding a job, they find work tiring again.

Their parents always pushed them to study hard, enroll in after-school courses and never take a day off. The results were often a severe lack of sleep and extremely unhealthy body. The ideal future they were dreaming of back then turned out to not exist. They are loath to return to their hometowns, but the first-tier cities, such as Beijing, Shanghai, Shenzhen, and Hangzhou, are strangling the life out of them. No matter how long they work — all day, six days a week, seven days a week — their employers are still not satisfied. Their efforts can do nothing to offset the endless “involution” of the society that consumes them. This is how the first group of “Sanhe Gods” emerged in Shenzhen (Sanhe is the name of the area’s largest HR company) — they were migrant workers who only took temporary day jobs, purportedly “sitting around and waiting to die.”

People who choose “tang ping” find that due to high house prices, survival is hard and the future is in general hopeless, even if they work as hard as possible to make money, borrow a loan to buy a house, to buy a car, get married and have a family, they are still unhappy and unsatisfied. They’ll have to repay the mortgage for the next 30 years, then watch as their children go through the same hard life of involution.

It’s a slow cycle of horror. It makes them wonder, is working hard really worth it?

Young generations in China nowadays are dispirited; it doesn’t mean their minds are dull.

They are thinking hard about how a life of repetitive “involution” could possibly be meaningful. The post-’90s and post-’00s generations were hoping to live easy and carefree lives, thanks to the hard work of their parents’ generation that witnessed a rapid development of China in the last 40 years. In a more material-rich society, it’s supposed to be easier for them to get everything they need and to live in relative freedom and ease. But the reality is, despite a wealth of resources, distribution is getting more skewed, especially for newcomers. Their efforts and savings at a normal pace can do nothing against the jaws of a relentless society. In the end, they lose their value, and with it, their interests and dreams.

If hard work is all in vain, then why should one even try? If the future is hopeless, it’s better to just muddle along.

Even if you’re working diligently toward ambitious goals, the end result is the same. Just like Oblomov, who idles life away by looking out the window from his bed, you uselessly advance toward death.

Nothing is more lamentable than a dead heart, but dead hearts are exactly what today’s youth have when they choose to lie flat. This is the biggest problem in society today.

The core tenets of “tangping”

People who “tang ping” adhere to three main principles: no consumption, no work and no communication.

Marriage? No. Spending? No. Kids? No.

Retirement plans? No. If one day they can’t care for themselves, they’ll just wait to die.

They do nothing but stare blankly at the ceiling. After having a meal, they’ll lie back down and continue. It can be seen as a new form of “decadentism,” reminiscent of the early 20th century decadent literary movement. Now, about a century later, it seems to have made a comeback. The two incarnations, however, differ in essence. World War I crushed the idealism and spirit of progress that people on the European and American continents had held since the 19th century, causing youth to feel deeply “lost.”

A century later, youth in the East have been overwhelmed by “involution” — a monster even more pervasive and difficult to defeat than a world war. It calls to mind certain warning signs posted in North American wildlife parks: If you see a bear, don’t run; immediately crouch down or “lie flat” on the ground, leading the bear to think you are dead; only then will you have the chance to escape.

In fact, “decadentism” is also a kind of resistance, a “non-violent” form of noncooperation. It reflects the decadent generation’s doubts and rejection of the supposedly lofty ideals, positive values and good morals accumulated and passed down from previous generations. Thanks to “involution,” the blueprint for a “brave new world” described by older generations of thinkers, ethicists and educators has become quite fragile. It’s enough to raise deep doubts about the current world order, philosophies and morals. But when one lives in a monolithic society under close surveillance by other members, these are the “beasts of the system;” they can neither be outrun nor conquered head-on. Thus, the only way out is to “lie down.”

Youth movements powered China’s transition in the 20th century from the dynasties to a modern society. One century later, “tangpingism” has emerged as the new “New Culture Movement.”

The new youth recognize that they themselves have no power to resist “involution,” but they are also unwilling to join its dark forces or to participate in its games that ultimately only benefit the “involution insiders” pulling the strings. Therefore, their best bet is to opt out of the social mainstream altogether, completely abandoning the range of morals and values that mainstream has imposed on them.

Concepts and values of “progress” turn out to be a heavy burden for them to bear.

They do not buy housing, do not buy cars, do not get married and do not buy material things; they maintain the lowest possible standard of living and refuse to become money-making machines exploited by others. It’s true, your consumption behavior and various loans will go on to benefit the very few, who, after seizing your “power,” will only use it to oppress you that much more.

In today’s society, our every move is monitored and every action criticized. Is there any more rebellious act than to simply “lie flat?” Someone summed it up as “possibly the most silent and helpless act of resistance in the history of human civilization.”

In “Microcosmi,” a novel by Italian author Claudio Magris, an anxiety-ridden priest asked a child playing in the street, “What would you do if the end of the world was coming?”

The cheerful child gave him a patronizing look and said, “I’d keep playing.”

Ye Kai is the pen name of Liao Zenghu, a novelist, editor and Chinese language educator. He holds a doctorate in modern and contemporary literature from the Department of Chinese Language and Literature at East China Normal University.