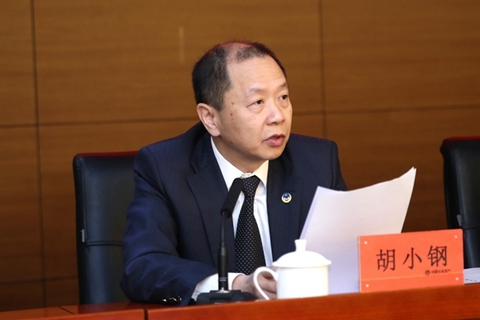 Hu, 58, worked at Orient Asset nearly 20 years before he was appointed vice president of Great Wall. The statement by the Central Commission for Discipline Inspection of the Communist Party of China mentioned only his title at Orient Asset, indicating the violations involved his work at that state-owned bad-debt manager. Before joining Orient Asset in 1999, Hu worked at Bank of China as deputy director of the bank’s Hunan Branch and deputy director of corporate business.

Yu Qian, general manager of the Sichuan Branch of Orient Asset, was under investigation in April. Both Yu and Hu are from Hunan province, and Hu was Yu’s supervisor at Orient Asset, a person close to the matter told Caixin. Hu’s violations involved a large amount of corruption, the person said.

Since China Huarong Asset Management Co. Ltd., another state-owned bad-debt manager, was in trouble in 2018 after then-Chairman Lai Xiaomin was accused of bribery and ultimately found guilty of receiving 1.79 billion yuan ($277 million) of bribes, all of the big four state-owned bad-debt managers have experienced senior management shuffles. Personnel changes are thought to prevent corruption by long-term executives at one organization.

China’s big four asset management companies (AMCs) were created in 1999 to take over nonperforming assets of the country’s biggest state-owned banks. Among them, Huarong is the biggest with 1.73 trillion yuan of assets under management. Orient ranks third, and Great Wall is the smallest, with total assets equivalent to just about one-third of Huarong’s at the end of June 2020.

During Lai’s tenure, Huarong expanded into areas including securities trading, trusts and other investments, deviating from its original mandate of disposing of bad debt. Huarong’s risky business endeavors and ambiguous ties with private borrowers also sparked controversy. Lai was sentenced to death and executed in January in an unusually harsh sentence for such a crime.

Last week, Liang Qiang, a veteran who has served at all of the three other AMCs, was named deputy Communist Party chief of Huarong, sources with knowledge of the matter told Caixin. Sources said he is also likely to take the job as Huarong’s president after going through the necessary procedure.

Liang spent 20 years at China Cinda Asset Management Co. Ltd., the second-largest of the Big Four, before he served as vice president of Orient Asset. He was named president of Great Wall just two weeks before he was transferred to Huarong. Separate sources had told Caixin previously that Liang was reluctant to serve as Huarong president before taking on the Great Wall role.

A central inspection team will work with the China Banking and Insurance Regulatory Commission in the first half of 2021, and relevant inspection work will be extended to the Big Four AMCs. Lai’s execution shows the graft buster is stepping up anti-corruption efforts in the sector, an industry participant said.