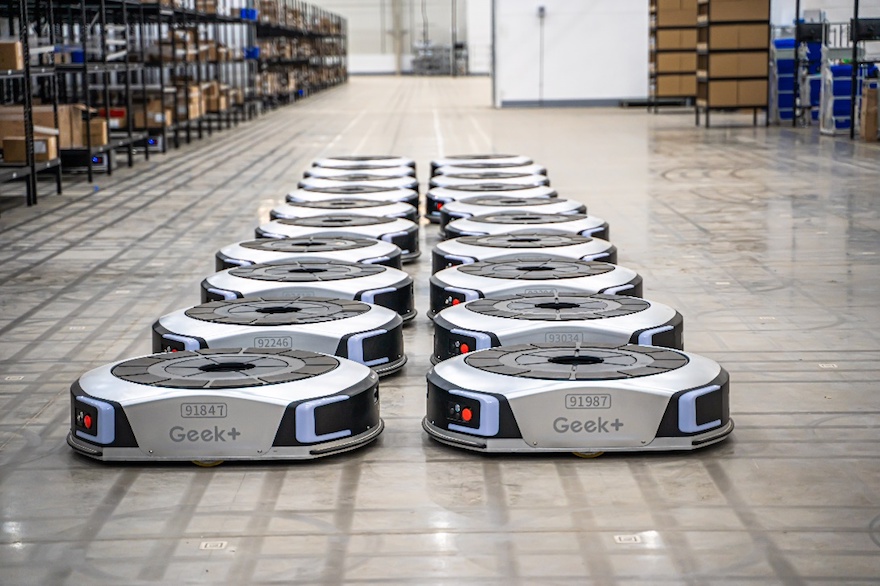 Geek+, a Beijing-based startup focusing on developing robotics and artificial intelligence technologies to improve warehouse efficiency, has secured a contract to deploy its autonomous mobile robots in a distribution center operated by convenience store chain Circle K in Hong Kong, capitalizing on a trend of robots being used to streamline workflow and reduce staffing costs in industries from manufacturing to logistics.

The 13,000-square-meter distribution center, which restocks more than 300 Circle K Hong Kong stores that serve over 600,000 customers per day, is using 100 autonomous mobile robots developed by Geek+ to perform tasks such as moving ordered goods from designated areas to workstations where human workers complete the selection process, Geek+ said in a statement on Tuesday.

Geek+ said that these robots are equipped with technologies enabling them to automatically plan the optimal routes and that their small size will leave more room for storage racks to be placed in the distribution center.

Founded in 2015, Geek+ has developed a portfolio of robots that are designed to do jobs including picking, sorting, forklifting and disinfecting, according to its website.

Use of robots in workplaces or public places has seen a rapid rise especially since the start of the Covid-19 pandemic, due to the implementation of social-distancing measures. In China, for example, some hospitals started to use robots to deliver drugs and meals in an effort to reduce potential infections with the virus.