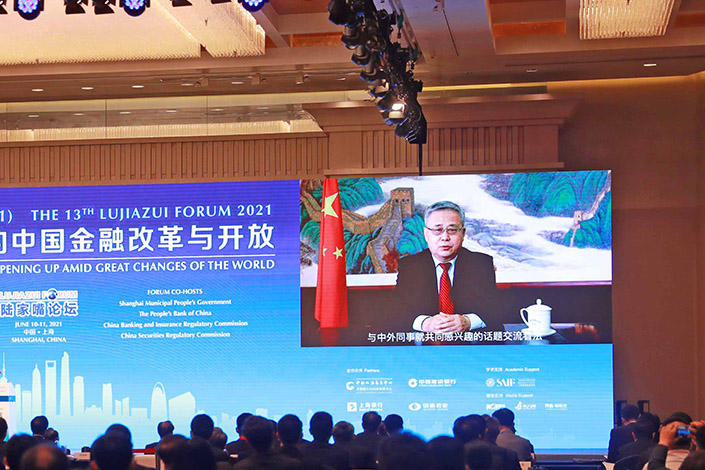 Guo Shuqing, secretary of the Communist Party Committee of the People's Bank of China and chairman of the China Banking and Insurance Regulatory Commission, delivers a speech via video to the 13th Lujiazui Forum in Shanghai on June 10, Photo: IC Photo

He also warned of the consequences of loose monetary policy by governments around the world implemented to support their economies through the Covid-19 pandemic and defended China’s own policies against criticism it hadn’t done enough to contribute to supporting growth.

Guo, chairman of the China Banking and Insurance Regulatory Commission (CBIRC), made the comments in a video speech delivered at the 13th Lujiazui Forum in Shanghai on Thursday, according to a readout (link in Chinese) posted on the commission’s website.

Guo made it clear there would be no letup in financial regulators’ campaign to prevent risks and set out five priorities for their work — responding to a rebound in NPLs, preventing a resurgence of shadow banking, rectifying the illegal public issuance of securities disguised as private placements, preventing risks from derivatives trading, and being vigilant against Ponzi schemes.

Banks are facing increasing pressure from NPLs partly as a result of orders from financial regulators last year to lower interest rates and allow delayed repayment of loans and interest to help businesses hit by the coronavirus outbreak. While that helped many firms stay in business, it forced banks to offer lower interest rates and make loans in spite of the higher risks and Guo said some of those loans are expected to turn sour.

NPL pressure is also coming from other sources including real estate bubbles in some regions, which Guo said are “serious,” and local government financing vehicles, who are facing “great pressure” to repay debt.

“Defaults of some large and midsize enterprises have increased, aggravating the credit risk of banking institutions. The situation is even more severe for some small and midsize financial institutions,” he said. “Banking institutions must be urged to classify their assets properly and to increase loss provisions, to ensure they can dispose of nonperforming assets in greater amounts and faster.”

Although the scale of shadow banking has fallen 20 trillion yuan ($3.2 trillion) from its historical peak, the stock of shadow banking assets is still large and could easily rebound if not handled carefully, Guo said. China should prevent the resurgence of the problems of financial institutions adding financial leverage through cross-market financial products, and new asset management rules, which aim to crack down on risky shadow lending and excessive financial leverage, must be implemented conscientiously, he said.

Guo warned individual investors against betting on derivatives, describing the products as “very unsuitable” for personal investment because of their highly volatile nature which requires high risk tolerance. “The participation of ordinary individual investors is tantamount to gambling in disguise,” he said, adding “those who speculate on foreign exchange, as well as gold and other commodity futures will find it difficult to make their fortune, just as those who bet that house prices will never fall will eventually pay a heavy price.”

Last year, tens of thousands of investors in an oil futures product sold by Bank of China Ltd., one of the country’s largest state-owned lenders, lost billions of yuan after global crude prices collapsed. Bank of China was later fined $7.7 million due to multiple failures, including the omission of pressure-testing the investment product, poor management of risks, and inadequate disclosure of information to investors.

Regulators will also be vigilant against Ponzi schemes, Guo said, pointing to an “endless stream” of scams coming from fintech and internet finance that are involved in illegal fundraising activities. “There are no gifts from heaven and the promotion of ‘guaranteed principal and high returns’ is financial fraud,” he said.

Guo also called for more efforts to tackle problems in the bond market, which suffered a string of defaults late last year, including repayment failures by a state-owned coal miner and a major carmaker, which highlighted companies’ growing financial difficulties.

There is an “urgent need for governments at all levels, enterprises, intermediary agencies, and investors to realize that evasion of debt is not only an unethical act, but also an illegal act or even a crime,” he said.

“The fundamental measure is to accelerate the reform of the registration system centered on information disclosure, truly strengthen the management of investor suitability, and ensure that issuers, intermediaries, and investors strictly fulfill their obligations and assume their respective responsibilities in accordance with the law,” he said.

Turning to global markets, Guo said some developed economies, such as Japan, the U.S. and the European Union, had implemented “unprecedentedly loose” monetary policies to counter the impact of the pandemic, but countries across the world have had to shoulder the fallout including higher asset prices. He defended China’s own policies, saying criticisms of an inadequate response and insufficient contribution to the recovery of the global economy were based on “prejudice or misunderstanding.”

Although China had not flooded the economy with liquidity, it lowered banks’ deposit reserve requirement ratios and promoted more lending to the real economy. “It has significantly expanded the production and supply capacity of products urgently needed in China and the rest of the world and promoted the process of green transformation of the economy,” he said.

He also rejected accusations that China was fueling global inflation.

“If the large volume of money issued by the most developed countries has formed the driving force for global inflation, then the goods produced by China’s hundreds of millions of workers have been the anchor for stabilizing global inflation,” he said.