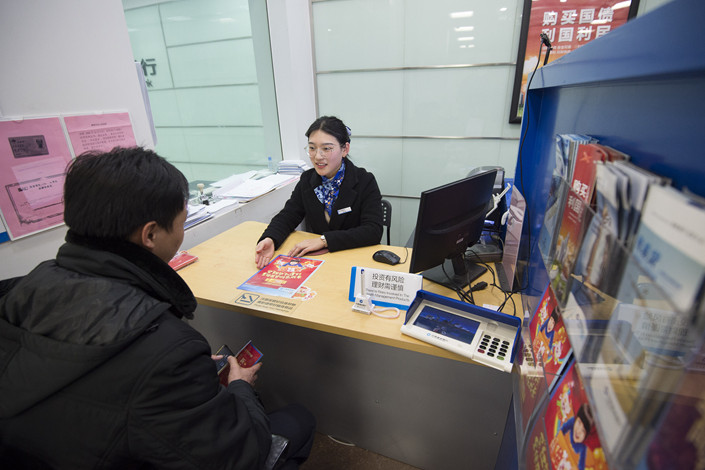 Chinese banks have made little progress in overhauling their wealth management products (WMPs) in response to new rules first proposed more than two years ago. Now, with less than a year left in an extended transition period, regulators face a dilemma over whether to again delay the regulations or to relax them.

WMPs are part of China’s $15 trillion asset-management industry, which has been the target of a regulatory crackdown on risky shadow lending and excessive financial leverage. One of the chief goals of the new rules is to ban banks from guaranteeing returns on their WMPs, a long-standing practice that encourages investors to dump money into risky, high-yielding assets while expecting state protection if the underlying investments fail, thus posing significant risk to the financial system.

The new regulations clearly bar banks from making implicit guarantees, including guarantees of principal and interest, rolling forward WMPs to new issuance and raising funds or entrusting other institutions to make payments. Instead, banks are required to market new WMPs based on the most recent market price, a method known as net asset value and a better indicator of risk, and to phase out WMPs that do not comply with the new rules.

But given the market scope of outstanding WMPs, the change is not easy for banks. More than halfway into the transition period, banks have completed less than a quarter of the overhaul, according to some bankers.

With the slow progress, regulators are discussing the possibility of extending the transition for three more years, according to people close to the regulators. Meanwhile, banks are being asked to make plans and update their progress.

If the transition period is extended, it will be the second delay for the new rules. The draft regulations first released in November 2017 set June 20, 2019, as the end of the transition period. The document caused trepidation among banks, which feared an exodus of clients seeking alternative low-risk products.

Then in July 2018, the central bank issued another notice, offering more leeway in implementing the guidelines. Financial institutions are now allowed to set their own agenda for complying with the new rules before the grace period ends, while the draft version had required them to finish one-third of their overhaul each year and complete the entire process in three years.

The extension of the deadline and change in regulators’ attitude have sent a signal that the new rules might be further loosened, putting banks on hold in their overhaul efforts.

Actually, even before the July 2018 notice, banks anticipated possible relaxation, slowing their pace of compliance, according to some bankers.

In addition to the WMPs that the new rules mainly address, banks also face difficulties in dealing with their massive nonstandard credit assets with long maturities.

Regulators have long been concerned that too many of the funds raised via as¬set management products are being invested in nonstandard assets that are low in transparency and lack liquidity. The new regulations stipulate that asset management products must abide by the relevant quotas and liquidity requirements when making nonstandard investments, while also requiring that they strictly match maturities.

Under the new framework, financial institutions need to offload such nonstandard assets or return them to their balance sheets by reasonably adjusting certain measurements.

Since the release of the new rules, however, banks’ nonstandard asset ratios largely stayed put. Some banks have started to offload such assets, while others chose to wait until the end of 2020 for possible new relaxation.

As of the end of June, the outstanding balance of non-principal-guaranteed WMPs was 22.18 trillion yuan ($3.19 trillion), 17.02% of which were nonstandard assets, largely flat with the ratio of 17.23% at the end of 2018, data from WMP information provider Chinawealth.com.cn shows.

Banks are not actively reducing their nonstandard assets, partly because returning them to balance sheets faces restrictions such as credit thresholds, but also because such assets generate higher returns with relatively small valuation volatility, which are banks’ preferred portfolio, analysts at Huachuang Securities Co. said in a report.

Banks face two problems now in the disposal of existing nonstandard assets: how to deal with long-term nonstandard assets with maturities after 2020 and how to renew those that are due at the end of the transition period.

“Generally speaking, businesses need to renew 70% of their corporate financing to maintain normal operation,” said the head of asset management at a bank. “If the existing nonstandard assets cannot be renewed by the end of 2020, it’s like stop making new loans to companies once their existing loans are due.”

Not only is it difficult to deal with existing problematic assets, banks also lack motivation to launch new products that meet the new requirements. Since June, the newly formed wealth management units of China’s top state-owned lenders have all launched net-asset-value WMPs, but the total offering size was limited.

As banks switch to the net-asset-value approach, new WMPs that fully comply with the new rules account for less than 10% of total issuance, while only 20%-30% of the old products have been reduced, according to the head of asset management at the same bank.

In addition, during the transition period, data on the actual size of net-asset-value WMP offerings mainly rely on banks themselves, without scrutiny by regulators, the banker said.

In the absence of an effective results-review system, no one wants to be the first to move, he said. The heads of bank asset management units are aware that those pushing harder on net-asset-value WMPs will lose more customers more quickly, he said.