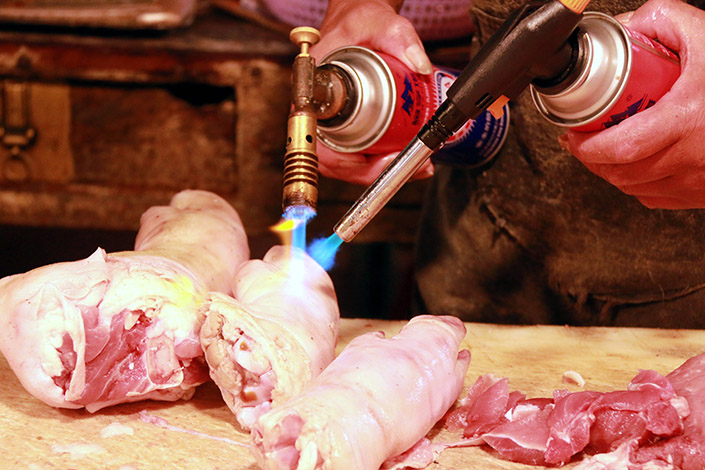 A slump in live hog prices in China, the world’s largest producer and consumer of pork, has triggered a new government early warning system that could lead to state buying to prop up the market if the slide continues, according to the nation’s top economic planner.

The National Development and Reform Commission (NDRC) issued a statement (link in Chinese) Wednesday saying that falls in prices last week due to surging domestic supply, increasing imports and weak seasonal demand had triggered a so-called “level-three warning,” which serves as the mildest level of a new three-tier system that involves improved use of strategic pork reserves to stabilize the market.

The average wholesale prices of pork have tumbled in the first half of this year as farmers in China’s $300 billion pig industry have boosted production in the wake of the deadly African swine fever epidemic in 2018 and 2019 that decimated herds.

“We will closely follow the trends in live pig production and market prices together with relevant departments and then conscientiously organize and implement the ‘contingency plan’ to carry out reserve adjustments in a timely manner and promote the smooth operation of the live pig market,” the NDRC said in the statement without elaborating.

The so-called contingency plan (link in Chinese), whose official title is “Improving the Government’s Pork Reserve Regulation Mechanism and Guaranteeing Supply and Stabilizing Prices in the Pork Market,” was released earlier this month and includes measures to improve the existing price monitoring and warning system and create a new type of reserve — a temporary reserve — designed for handling drastic market changes.

Under the new plan, the existing pig-to-feedstuff ratio, a cost-benefit indicator which compares the prices of domestic pigs and corn, will be supplemented by two new indicators: one to measure the average retail prices of lean pork in 36 major cities and the other to monitor changes in the available supply of breeding sows, according to the NDRC (link in Chinese).

The new system, which aims to protect both consumers and farmers by warning both excessive rises and falls in price, also lifted the break-even point of the hog-to-feedstuff ratio to 7:1 from 5.8:1, which had been in place since 2015, due to changed market conditions.

Ratios that rise or fall significantly beyond certain levels will trigger the new three-tiered early warning system and possible government intervention in the market.

A level one warning, which is the most severe, will be triggered when the ratio exceeds 12:1 or falls below 5:1, signifying intense market conditions.

After two years of high pork prices due to African swine fever, pig farmers are now worried that prices will continue to slide. Previously, they had relied on fattening their animals to generate higher returns per head, which backfired and led to prices to slump further amid abundant supply in the wake of the epidemic.

“With China’s domestic pork production impacted significantly by African swine fever, releases from the central pork reserve have been used primarily as a tool for tempering pork price increases,” said the U.S. Meat Export Federation in a statement on the same day the new plan was announced.

“But with hog prices recently dropping more than anticipated, the NDRC statement suggests it will take a more active role in the strategic purchase of domestic pork to bolster prices,” said the federation.